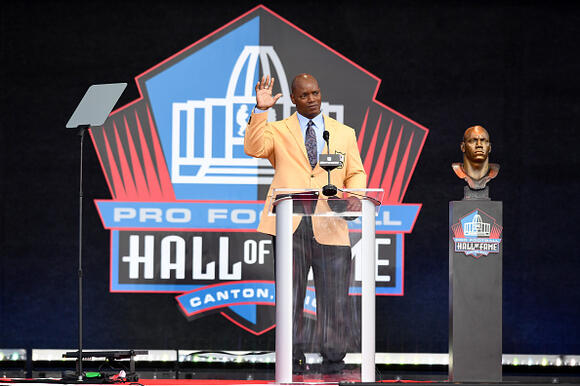 CANTON, OH – This weekend, eight people joined professional football immortality, just as many of the legends of the game have done through the years at the beginning of August.

The Class of 2022 had their induction ceremony for the Pro Football Hall of Fame on Saturday for their contributions to the game of football.

Included in that was a player who had a tremendous impact on the franchise in San Francisco, but his roots are firmly planted in Chicago.

Bryant Young, a native of Chicago Heights and former standout at Bloom High School who played his entire career with the 49ers, was enshrined with seven other legends of professional football.

He was introduced by his daughter, Kai, along with Edward J. DeBartolo Jr., the former owner of the 49ers, who helped him unveil his bust on the stage of Benson Hall of Fame Stadium.

Chicago, of course, came up in his induction speech, including a position move that was made at Bloom that would have a major impact on his career.

“Although I thought I’d make a fine fullback, my high school coaches at Bloom in Chicago Heights, they put me where I belong, in the trenches,” said Bryant, and that decision to become a defensive tackle was a good one.

Young, a three-sport athlete at Bloom, had a strong career at Notre Dame, including a first-team All-American selection in 1993 when the Irish finished second in the nation. He was picked by San Francisco with the seventh-overall pick of the 1994 NFL Draft as he began a long run with that franchise.

The defensive tackle played 14 seasons with the 49ers, winning Rookie of the Year honors in 1994 in helping the franchise to their fifth Super Bowl title. Over the rest of his career, Bryant was selected to four Pro Bowls, was named an NFL second team All-Pro three times while making the first squad in 1996.

After a serious leg injury late in the 1998 season, Young returned to make 11 sacks in 1999, earning him NFL Comeback Player of the Year honors along with winning the 2000 George Halas Award.

The most memorable part of his speech, however, had nothing to do with football, but rather the battle that his late son Colby had with cancer during his childhood.

“We assured Colby we’d keep his memory alive and continue speaking his name. On October 11, 2016, God called Colby home. Colby, you live on in our hearts. We will always speak your name,” said Bryant of his late son, and he certainly did during his greatest football moment.

Larry Hawley has more on Young in this week’s “Random Hawlight” on WGN News Now. You can watch that segment in the video above.

Justin Fields clears up quote from Sunday: ‘I respect every fan that we have’

Unprompted on Wednesday at this news conferece, the quarterback addressed some of the uproar on social media about one of his comments on Sunday after the loss to the Packers.
CHICAGO, IL・3 DAYS AGO
WGN News

The Chicago Sun Times beat reporter discusses the season in which they set a team record for wins but fell short of a repeat WNBA championship along with the offseason for the team on this WGN News Now segment.
CHICAGO, IL・1 DAY AGO
WGN News

#WGNTBT looks back at the moment at Wrigley Field on September 21, 1997 and how it was also the last game for a Cubs' legend.
CHICAGO, IL・2 DAYS AGO
WGN News

The pitcher gave up six runs, three of which were earned, in a 8-2 loss to the Guardians that hurt their already slim hopes to make the postseason.
CHICAGO, IL・2 DAYS AGO

See a Bears-Texans preview on ‘The 9-Yard Line’

We preview the Bears' third game of 2022 as we check in with the team after the loss to the Packers. Hear from Justin Fields & the offense after a run-heavy game in Green Bay, injury updates on Roquan Smith and Jaylon Johnson, Lovie Smith's return to Soldier Field with Houston, and Kenneth Davis talks about the Bears through two weeks.
CHICAGO, IL・1 DAY AGO
Dodgers Nation

Don’t… be this guy. On a magical night for Albert Pujols, the Cardinals, the Dodgers, and Major League Baseball, one fan, unfortunately, sapped some of the fun out of Albert’s 700th career home run. A source revealed to a Fox Sports contributor that the unidentified fan who...
LOS ANGELES, CA・10 HOURS AGO
WGN News

An Alabama man is facing a reckless manslaughter charge after his 2-year-old grandson died when he was left in a hot vehicle for seven hours, authorities said Wednesday.
BLOUNT COUNTY, AL・2 DAYS AGO

Rideshare passenger shot on West Side

CHICAGO — A rideshare passenger was shot and wounded on the city’s West Side. The shooting happened in the 4400 block of West Lake around 10 p.m. Thursday. Police said a 23-year-old man was in the back seat of a Lyft vehicle, when someone in a dark colored SUV opened fire. The man was struck […]
CHICAGO, IL・1 DAY AGO
Larry Brown Sports

UPDATE: TMZ was told by sources that Swift is NOT lined up to play the halftime show. The halftime show for last season’s Super Bowl was considered by many to be the greatest ever assembled, and the NFL will have a tough time topping it. Taylor Swift may be up for the challenge.
NFL・1 DAY AGO
WGN News

CHICAGO — Four people were killed in shootings in Chicago from the hours of 1:00 a.m. to 6:00 a.m. Saturday morning. According to officials, two men were standing in a parking lot at the 7100 block of North Clark Street in Rogers Park around 1:26 a.m. when a group of people fired shots at them. […]
CHICAGO, IL・11 HOURS AGO
WGN News

Arrest made in beating of man left for dead in Chinatown

Anyone with information may leave an anonymous tip at cpdtip.com.
CHICAGO, IL・23 HOURS AGO

This month marks the 40th anniversary of the “Tylenol Murders” – a case that led to seven Chicago area deaths and several others elsewhere.   To this day, it remains unsolved.  It was the fall of 1982 and the mystery gripped the nation in anxiety and fear. Someone poisoned extra-strength Tylenol, the best-selling pain reliever […]
CHICAGO, IL・1 DAY AGO
WGN News

CHICAGO — Tony La Russa will not return to the dugout as manager of the Chicago White Sox this season, according to USA Today’s Bob Nightengale. According to Nightengale, La Russa’s doctors advised against him making a return to the team after undergoing surgery to repair his pacemaker. La Russa has been out since Aug. […]
CHICAGO, IL・1 HOUR AGO
WGN News

2 stabbed, 1 fatally, a few minutes apart on West Side

CHICAGO — A man and a woman were stabbed, one fatally, a few minutes apart in the Austin neighborhood Friday morning. Police said a 40-year-old man was inside an apartment building on the 5200 block of West Crystal Street around 3:23 a.m., when a known man began stabbing him. The man was transported to Mount Sinai […]
CHICAGO, IL・1 DAY AGO
WGN News

Natural gas cause of building explosion that killed man, injured 7 others: CFD

CHICAGO — One of eight people who was hospitalized after an apartment building exploded in the Austin neighborhood has died. According to the Chicago Fire Department’s Office of Fire Investigation, the source of the explosion was the ignition of natural gas. The company that manages the building released a statement Friday that said “improper use of […]
CHICAGO, IL・1 DAY AGO
WGN News

Police: Inmates got out of Illinois jail with pandemic loans

JOLIET, Ill. (AP) — More than two dozen people have been charged in Illinois with fraudulently obtaining pandemic relief money, with authorities alleging that some of them were behind bars when they used their relief money to post bond and free themselves from jail. Joliet Police Chief William Evans said Wednesday that 25 people were […]
JOLIET, IL・2 DAYS AGO
WGN News

The victim was heading into her senior year at Western Michigan University.
LISLE, IL・1 DAY AGO
WGN News

WAUKEGAN, Ill. (AP) — A former suburban Chicago police officer who was fired after he shot into a car two years ago, killing a Black man and seriously wounding the man’s girlfriend, has been charged with second-degree murder and involuntary manslaughter, authorities announced on Thursday. In a news release, the Lake County State’s Attorney’s office […]
WAUKEGAN, IL・2 DAYS AGO
WGN News

TheSportsBank.net publisher and reporter discusses Illinois, Northwestern, and Notre Dame along with other topics on the college sports landscape on this WGN News Now segment.
CHICAGO, IL・1 DAY AGO