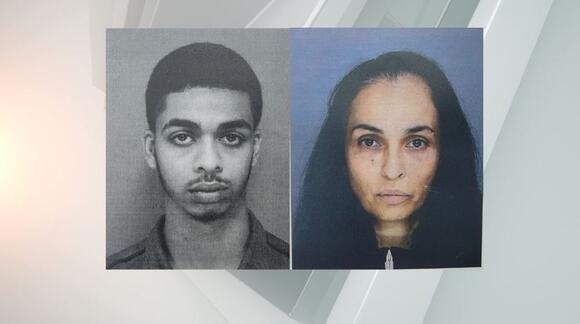 According to Pennsylvania State Poice (PSP), around 11:30 p.m. police were called for gunshots heard from a parking lot of Fallbrook Apartments in Carbondale.

Once arriving on the scene police say they found a Pernell Simmons, 35, on the ground with no signs of life and bleeding from his torso. Investigators found a 9mm luger casing on the ground near Simmon’s body.

As stated in the affidavit, surveillance video was given to police by neighbors that showed Simmons walking out of an apartment building when a silver Scion TC Coupe, driven by a man, later identified as Taaj Blan, 21, approached him.

The video showed Simmons walking to the driver’s side and getting shot causing him to fall to the ground, allowing Blan to collect items that fell near Simmions and drive away, according to court papers.

Investigators say they got in contact with a witness to the incident who told them Simmons, himself, and two others were supposed to meet a man for a drug deal.

The witness informed police while Simmons was speaking on the phone with the man, he heard the conversation turn hostile regarding the location of the meet-up, as stated by investigators.

Police say Simmons was dropped off at the apartment complex when the witness saw the Scion drive up to Simmons, an argument happen with the driver, and multiple gunshots were heard.

On Tuesday the vehicle in question was seen driving and pulled over for a traffic stop. Authorities state the driver, Margaret Del Castillo, Blan’s mother, was brought in for questioning after a bag was found inside the car containing the clothing Blan was wearing the night of the shooting.

Castillo told police she was going to the laundry mat to washing clothes and was unaware the clothing in the bag was the ones Blan was wearing the night of the shooting.

CARBONDALE CITY, LACKAWANNA COUNTY (WBRE/WYOU) — State police arrested a man after they say a traffic stop found him in possession of meth and a weapon. According to Pennsylvania State Police, on Monday around 11:11 a.m. troopers pulled over a car on South Main Street in Carbondale City, Lackawanna County. PSP stated the driver, later identified […]
LACKAWANNA COUNTY, PA・5 HOURS AGO
WBRE

BERWICK, COLUMBIA COUNTY (WBRE/WYOU) — According to Pennsylvania State Police, a 22-year-old man was arrested in Berwick and is facing forgery and counterfeiting charges. PSP say that the man’s first victim, a 70-year-old woman, initially reported that the man had accessed her bank account without her consent. The victim also reported that the suspect had […]
BERWICK, PA・1 DAY AGO
WBRE

SCRANTON, LACKAWANNA COUNTY (WBRE/WYOU) — Police arrested two men after they say one was found to be illegally possessing a gun, and drugs were seized from inside a U-Haul during a traffic stop in Scranton. According to the Scranton Police Department, on August 8, officers pulled over a U-Haul moving truck in the 1100 block of […]
SCRANTON, PA・1 DAY AGO
WBRE

LUZERNE COUNTY (WBRE/WYOU) — Police say an inmate in Luzerne County Correctional Facility plotted to have two girls and a woman killed before his trial. According to Pennsylvania State Police, in December of 2021 officials learned that an inmate at the Luzerne County Correctional Facility was asking fellow inmates about hiring a hitman to kill multiple […]
LUZERNE COUNTY, PA・1 DAY AGO

EYEWITNESS NEWS (WBRE/WYOU) — The Pennsylvania State Police in Wilkes-Barre announced they will be conducting DUI patrols on various roadways. According to PSP, the aim of sobriety checkpoints and roving patrols is to deter drinking and driving. Police say they are operating with a “zero-tolerance enforcement policy”. Various roadways within Luzerne County that have seen a […]
LUZERNE COUNTY, PA・7 HOURS AGO
WBRE

NANTICOKE, LUZERNE COUNTY (WBRE/WYOU)- One man is dead after an early morning domestic situation.   Around 4:30 am Sunday, Nanticoke Police arrived on scene on East Grand Street after receiving reports of an ongoing domestic situation.   According to police on scene a 32-year-old male had been assaulting his girlfriend before she managed to escape the […]
NANTICOKE, PA・2 DAYS AGO
WBRE

SCRANTON, LACKAWANNA COUNTY (WBRE/WYOU) — Officials are charging a man after they say he and others used stolen identities in a scheme for money. According to US Attorney Gerard M. Karam, Robert Brownstein, 51, of Scranton, along with conspirators allegedly used stolen identities to create forged identification documents, credit, and debit cards. Investigators say that the […]
SCRANTON, PA・1 HOUR AGO

TOBYHANNA TOWNSHIP, MONROE COUNTY (WBRE/WYOU) — State police in Monroe County say they have seized over just 70 pounds of marijuana from a car after conducting a traffic stop. According to Pennsylvania State Police, on Saturday, September 24, troopers pulled over a car for traffic violations in Tobyhanna Township. Investigators say during the stop, there were […]
MONROE COUNTY, PA・1 DAY AGO
WBRE

SCRANTON, LACKAWANNA COUNTY (WBRE/WYOU)— The Lackawanna County District Attorney tells Eyewitness News a man who pled guilty to killing a toddler in Scranton was sentenced to up to 60 years in state prison Friday evening. District Attorney Mark Powell said the judge sentenced Christopher Mele, 35, to a minimum of 30 years and a maximum […]
SCRANTON, PA・3 DAYS AGO
WBRE

SOUTH ABINGTON TOWNSHIP, LACKAWANNA COUNTY (WBRE/WYOU) — Police say a man is being charged with DUI after a high-speed chase with officers ends in a crash. According to the South Abington Township Police Department, on Tuesday around 1:00 a.m. in the 100 block of Northern Boulevard, an officer attempted to pull over a car that was […]
SOUTH ABINGTON TOWNSHIP, PA・3 DAYS AGO
WBRE

SWIFTWATER, MONROE COUNTY (WBRE/WYOU) — Pocono Township Police Department report that the suspect from Friday’s robbery of the Keystone Community Bank in Monroe County is the same suspect from Friday’s robbery of the FNCB Bank in Plains Township.   According to police, the suspect entered the Keystone Community Bank at 11:43 a.m. Friday.   The […]
MONROE COUNTY, PA・3 DAYS AGO

SCRANTON, LACKAWANNA COUNTY (WBRE/WYOU) — Scranton Firefighters are investigating a deadly fire in the city. The Scranton fire Department said they were dispatched for a reported house fire on the 500 block of North Main Avenue just after 4 p.m. on Saturday. Scranton Fire Officials confirm one person had died. Another person was injured but […]
SCRANTON, PA・2 DAYS AGO
WBRE

Catalytic converters, gun stolen out of cars in Carbon County

EAST SIDE BOROUGH, CARBON COUNTY (WBRE/WYOU) — Pennsylvania State Police say that on Wednesday, various items, including catalytic converters were stolen from three cars in Carbon County. PSP say that the cars were parked at the East Side Inn parking lot. According to PSP, someone broke into the three vehicles and stole the following items: […]
CARBON COUNTY, PA・1 DAY AGO
WBRE

EYEWITNESS NEWS (WBRE/WYOU ) — Sunday marks 40 years since George Banks murdered 13 people in Luzerne County. Banks was convicted of shooting and killing seven children, five of his own, and six adults. At the time, it was one of the largest mass murders in the history of the United States and remains the […]
LUZERNE COUNTY, PA・3 DAYS AGO
WBRE

MONROE TOWNSHIP, WYOMING COUNTY (WBRE/WYOU) — Edward Nulton a Kunkel Firefighter tragically passed away in 2018, one year after being hit by a dump truck while directing traffic at a crash scene. On Monday, state and area officials gathered where Nulton was hit for the unveiling of a sign that dedicates a section of 309 […]
WYOMING COUNTY, PA・20 HOURS AGO
WBRE

Drivers in for the long haul for Casey Highway repairs

JESSUP, LACKAWANNA COUNTY (WBRE/WYOU) — Drivers in Lackawanna County are fed up with their bumpy commute. As a construction project is underway on the Robert P. Casey highway but those on the road say the new patchwork is a bust. Eyewitness News viewers asked us what’s going on with this road work? So we went searching for […]
JESSUP, PA・4 HOURS AGO
WBRE

SUGARLOAF TOWNSHIP, LUZERNE COUNTY (WBRE/WYOU) — This time of year, many people associate cemeteries with Halloween. But this story isn’t scary, it is inspiring. One teenager saw a local historic cemetery as a Girl Scout Silver Award Project that would help her and her community. Erica Schwear has been in the Girl Scouts since fourth […]
SUGARLOAF TOWNSHIP, PA・22 HOURS AGO
WBRE

The sights and sounds of the 167th Bloomsburg Fair

BLOOMSBURG, COLUMBIA COUNTY (WBRE/WYOU) — Showcasing what the 167 Bloomsburg Fair has to offer, PA live! host, Chris Bohinski, visited many hotspots at the fair. From the pig pen to the food tent, the Bloomsburg Fair has much to offer for those visiting Columbia County. Featured on PA live!, Paul Yoachim of the Pork Producers of […]
BLOOMSBURG, PA・22 HOURS AGO