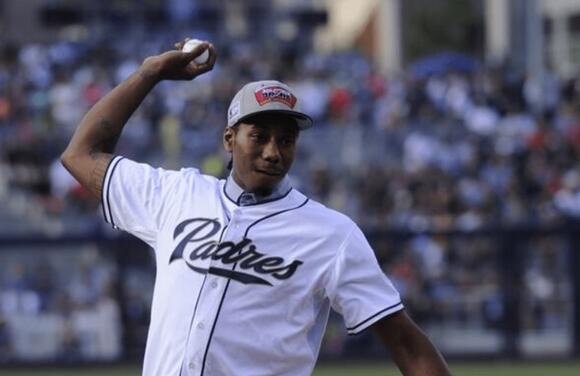 An All-NBA talent on the basketball court, LA Clippers superstar Kawhi Leonard is a known baseball fan too. The 2019 Finals MVP attended Toronto Blue Jays games when he was with the Raptors, and was most recently seen supporting the San Diego Padres at Petco Park:

Having attended San Diego State University, Kawhi is known to love the area, and has likely been training there most of this summer. Despite a five-game losing streak, the Padres have an exciting team after acquiring Juan Soto, Josh Bell, Brandon Drury, and Josh Hader at the deadline.

While some would perhaps expect Kawhi to support the Dodgers, having grown up near Los Angeles, and now playing for the Clippers, the superstar forward has supported the Padres for a while. Throwing out the first pitch for San Diego back in 2013, Leonard has always repped the Padres.

After missing the entire 2021-22 season with an ACL tear, Kawhi is expected to make his return during this year's pre-season. All reports indicate that he is progressing well, and should be ready to participate in multiple exhibition games before opening night. While some outlets continue to sleep on the Clippers, they should ascend right back into contention with a clean slate of health this year.

While Kawhi has been rigorously training, the two-time Finals MVP also enjoyed some baseball action between the Padres and Giants.

Kawhi Leonard looks like himself, according to his LA Clippers teammates
LOS ANGELES, CA・11 HOURS AGO
AllClippers

The LA Clippers could have a dominant team this year
LOS ANGELES, CA・14 HOURS AGO

The LA Clippers will have Kawhi Leonard, John Wall, and likely Paul George back for Monday's pre-season game in Seattle
LOS ANGELES, CA・1 DAY AGO
AllClippers

How Bradley Beal Helped John Wall During His Darkest Moment