Lady Gaga kicked off the U.S. leg of her Chromatica Ball tour this week with some pointed messages for lawmakers.

Shortly before launching into a piano-driven performance of her 2011 smash, “ Edge of Glory ,” Gaga told the crowd that she hoped “to dedicate this song to every woman in America” who “now has to worry about her body if she gets pregnant.”

A video of Gaga on stage at the D.C. show sharing her thoughts on abortion rights was widely circulated on social media.

“I pray that this country will speak up, that we will stick together,” she said, as seen in the clip. “We will not stop until it’s right!”

The 13-time Grammy winner, however, didn’t stop there.

She went on to explain why she took a moment to address these issues during her performance.

“I didn’t mean to be like a downer,” she continued. “But there’s some shit that’s more important than show business.”

The Supreme Court’s ultraconservative rulings on abortion and gun control as of late have sparked justifiable fears among many Americans that LGBTQ rights, including same-sex marriage, could soon be rolled back at the federal level.

Such concerns prompted Gaga, a longtime LGBTQ rights advocate , to use a portion of her set to share her thoughts on the prospect of the Supreme Court reconsidering its stance on marriage equality. 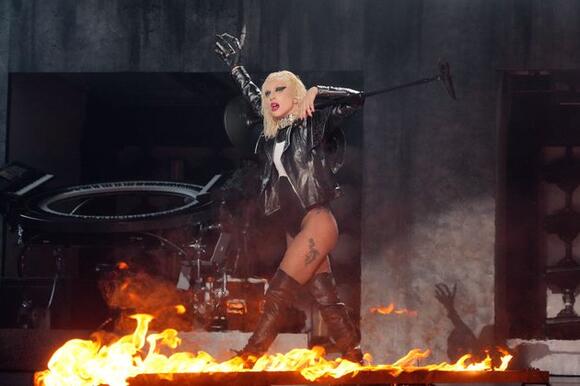 “This might not be the national anthem, but it’s our national anthem,” she reportedly declared before segueing into 2011’s “Born This Way,” a track long embraced as a rallying cry for the LGBTQ community. “They better not try to mess with gay marriage in this country!”

Gaga launched the pandemic-delayed Chromatica Ball tour before a sold-out crowd in Düsseldorf, Germany, last month. She will return to the concert stage Wednesday with a performance at MetLife Stadium in East Rutherford, New Jersey, before hitting San Francisco and Los Angeles, among other cities.

If the ruling which legalized same-sex "marriage" were to be overturned, that would be an amazing victory. It never should have been legalized to begin with!

the problem is you can't get away from it. it is everywhere, even in t.v. commercials, kids cartoons. there is no getting away from it anymore!

Thank you and Lady Gaga. I couldn't have children due to genetic disease: Cystic Fibrosis but no one has the right to anyone's bedroom activities. I became a pro- active teacher. I signed petitions , campaign for progressive candidatesand at 72 can helplet .

Fetterman's tattoos commemorate those who died violently when he was mayor of Braddock, Pennsylvania.
PENNSYLVANIA STATE・23 HOURS AGO
Business Insider

Former New Jersey Gov. Chris Christie (R) said if Donald Trump keeps making “nonsense arguments” on TV about the Justice Department investigation into his handling of classified documents, he might just find himself facing a “self-inflicted indictment.”. “I think these are all self-inflicted wounds by Donald Trump,”...
POTUS・1 DAY AGO
abovethelaw.com

Before being known primarily as Donald Trump’s errand boy, Chris Christie was a prosecutor. And he’s using that expertise to issue a warning to Donald Trump: shut your trap. During an appearance on ABC the former New Jersey Governor said the “nonsense arguments” (you know, like that he...
POTUS・18 HOURS AGO

HAVANA (AP) — Cubans have approved a sweeping “family law” code that would allow same-sex couples to marry and adopt as well as redefining rights for children and grandparents, officials said Monday, though opposition in the national referendum was unusually strong on the Communist Party-governed island. The...
WORLD・19 HOURS AGO
HuffPost

NEW YORK (AP) — The tears come quickly to Masih Alinejad when she talks about the messages she’s received in recent days from women in Iran protesting against their government after a young woman died in police custody over a violation of the country’s strict religious dress code.
PROTESTS・2 DAYS AGO
HuffPost

Former President Donald Trump said the “rich friends” he acquired from his presidency made it all worth it to him, according to an excerpt from reporter Maggie Haberman’s upcoming book published in The Atlantic on Sunday. “The question I get asked more than any other question: ‘If...
POTUS・1 DAY AGO

Seth Meyers mocked former President Donald Trump for choosing the “weirdest and most uncomfortable” way to talk about Russian President Vladimir Putin’s threat to use nuclear weapons in his war on Ukraine. Trump, during a weekend rally in North Carolina, referred to the word “nuclear” as “the...
PRESIDENTIAL ELECTION・5 HOURS AGO
HuffPost

The first lady has been spotted twice in this chic and comfortable Tanya Taylor dress, which is available in sizes XS through 3X.
BEAUTY & FASHION・1 DAY AGO
HuffPost

A beautiful portrait of the late monarch signaled a return to official duties for members of the royal family.
ENTERTAINMENT・3 HOURS AGO
HuffPost

The demonstrations sweeping Iran and the rest of the world are just the latest in a powerful resistance against the politicizing and policing of women’s bodies.
BEHIND VIRAL VIDEOS・1 DAY AGO

The conspiracy theory-spewing Fox News personality urged the GOP to copy one tactic of Giorgia Meloni in particular.
CELEBRITIES・3 HOURS AGO
HuffPost

In an interview with Axios, Sen. Lindsey Graham claims former President Donald Trump has the ability to destroy the Republican party.
POTUS・1 DAY AGO
HuffPost

Mabel Cuesta joins HuffPost Live to discuss what it is like to be queer in Cuba.
SOCIETY・20 HOURS AGO