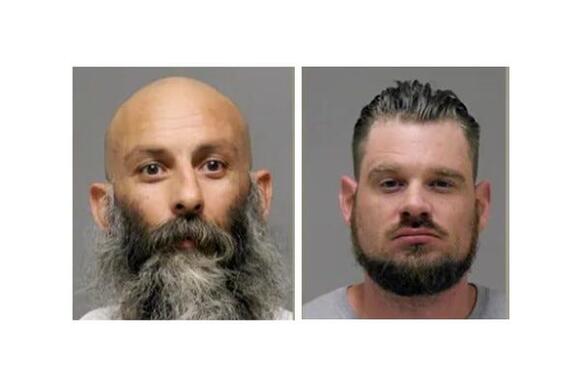 GRAND RAPIDS (WWJ) – A group of 18 men and women, including six alternates, have been seated to the jury that will decide whether two men charged with conspiring to kidnap Michigan Gov. Gretchen Whitmer are guilty.

A federal judge and lawyers in Grand Rapids on Tuesday finalized the jury for the retrial of Barry Croft, Jr., and Adam Fox. While a separate jury acquitted two other suspects in April, and two others previously pleaded guilty, a verdict could not be reached for Croft and Fox in the spring.

The men were ordered to go on trial again.

Federal prosecutors will again try to prove that Croft and Fox made special trips to Northern Michigan to plan the alleged kidnapping.

Defense attorneys have claimed Croft and Fox were entrapped by the FBI, while prosecutors say they were part of a plot to kidnap Whitmer ahead of the 2020 presidential election, devised by men who were upset with the governor’s COVID-19 restrictions and other policies.

As was the case in the first trial, the jury members for the retrial were picked in just one day. The jury includes 10 women and eight men. While all-white jury decided the first case, two Black women and a Hispanic man are on the jury for the retrial, according to a report from the Detroit Free Press.

U.S. District Judge Robert Jonker seemed to make mistrust in the government a priority in questioning prospective jurors, according to the Free Press. He asked them how they felt about the government and noted this case is “loaded with controversial issues,” including Whitmer’s response to the pandemic, mask mandates and lockdowns, as well as the FBI investigation.

He says any new trial typically favors the defense.

“Because the defense has seen all of the government’s witnesses,” Langton said. “But we will see.”

WARREN (WWJ) - In his first visit to Michigan since April, Former President Donald Trump is expected to draw big crowds at Saturday's rally in Warren, but police said they're up for the challenge. Mr. Trump is expected to speak this evening at the Macomb County Community College Sports and...
WARREN, MI・2 DAYS AGO
WWJ News Radio

After learning there were hundreds of families sleeping at schools and convention centers in Fort Myers in the aftermath of the storm, a Detroit Wing Company employee battled treacherous road conditions and drove six hours to bring them food.
FORT MYERS, FL・17 HOURS AGO
WWJ News Radio

Authorities in Lansing are currently investigating the scene of an officer-involved shooting on Tuesday morning, officials said. The Lansing Police Department said the scene in the 800 block of Buffalo Street is “active” after a shooting
LANSING, MI・2 HOURS AGO
WWJ News Radio

A security guard for Oxford Community Schools accidentally fired his weapon into the ceiling while using the bathroom on Monday, district officials said.
PUBLIC SAFETY・2 MINUTES AGO

More than 1,100 rescued in Florida, 74 found dead after Hurricane Ian

Oakland County Sheriff Mike Bouchard is encouraging hunters to use caution and common sense during the bow season, which lasts until Nov. 14, and then firearm hunting season, which runs for two weeks beginning Nov. 15.
OAKLAND COUNTY, MI・1 DAY AGO
WWJ News Radio

'It's a humanitarian effort now': DTE rallies to help 2.5 million Floridians left without power in the aftermath of Hurricane Ian

DTE is stepping up efforts to help out Floridians in the wake of destruction and catastrophic hurricane Ian, officials said on Thursday. Over 350 contractors with DTE Energy are poised and ready to lend a hand in restoration efforts
FLORIDA STATE・4 DAYS AGO
WWJ News Radio

As Hurricane Ian barrels toward Florida with the potential to cause mass devastation, the life-threatening storm is also bringing together political foes.
FLORIDA STATE・5 DAYS AGO

'We are still locking up too many kids.' The juvenile justice system in Michigan is overloaded. How did we get here?

Michigan has a statewide school system but why doesn’t it have a statewide juvenile justice system? In a new Daily J, WWJ’s Zach Clark identifies multiple problems with youth incarceration in Michigan. The fix won’t be easy but now there is a roadmap
MICHIGAN STATE・5 DAYS AGO
WWJ News Radio

September 30 is International Podcast Day. WWJ’s podcast, The Daily J hosted by Zach Clark, provides a daily dive into the top stories of the week, both in the Metro Detroit region and across the world. Revisit some of the Daily J’s top episodes.
DETROIT, MI・3 DAYS AGO
WWJ News Radio

Honoring one of our own: Dozens gather in Chesterfield Twp. to celebrate life of late WWJ Anchor Jim Matthews

While Florida is just starting to dig out from Hurricane Ian, officials in Lee County are already predicting “fatalities are in the hundreds.”
FLORIDA STATE・4 DAYS AGO
WWJ News Radio

Volunteers from Michigan reach hard-hit Fort Myers to help with disaster relief: "We want to get them what they need right now."

Members of a Michigan nonprofit that specializes in natural disaster support are already on the ground in Florida, helping some of the people most in need in the wake of Hurricane Ian.
FORT MYERS, FL・4 DAYS AGO
WWJ News Radio

Live updates: Close to 2 million without power in Florida

The National Hurricane Center shared on Wednesday that Hurricane Ian had become “extremely dangerous,” strengthening to a Category 4 storm as winds hit a maximum of 140 mph.
FLORIDA STATE・5 DAYS AGO

The National Hurricane Center says Ian could bring a “life-threatening” storm surge to South Carolina and “flooding rains” are “likely across the Carolinas and southern Virginia.”
CHARLESTON, SC・3 DAYS AGO
WWJ News Radio

Police said a woman walking along the freeway in southwest Michigan was fatally struck by a vehicle early Thursday morning. According to Michigan State Police, the deadly crash occurred around 5:45 a.m., in Paw Paw Township Police said a driver…
DECATUR, MI・4 DAYS AGO
WWJ News Radio

A young man was taken to the hospital after an industrial accident cause him to get pinned under machinery in Oakland County on Friday morning, officials confirmed.
OAKLAND COUNTY, MI・3 DAYS AGO
WWJ News Radio