One year ago: Springfield triple homicide 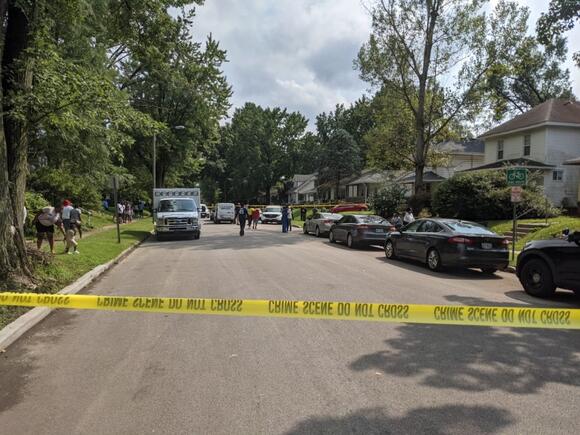 According to Sangamon County Coroner Jim Allmon, Bryant Williams, Keyara Gant, and Savante English were shot at a house near the corner of South 10th Street and East Oberlin Avenue on August 9th, 2021. All were pronounced dead at the scene .

Three suspects have been charged for their involvement in the triple homicide.

The first two suspects, Joseph Hemborough and Kelton Galmore, were arrested February 23rd . The third, Larry McClain Jr. was arrested the next week .

A grand jury indicted all three suspects with 9 counts of first-degree murder, armed robbery, armed violence, and unlawful possession of a weapon by a felon.

According to court records, the trials have been delayed multiple times due to the Sangamon County state’s attorney office entering new evidence. All three suspects have pleaded not guilty.

Coroner: One dead in ‘neighborhood dispute’

LOVINGTON, Ill. (WCIA) — The Macon County Coroner announced on Tuesday that a Lovington man was killed on Monday in what he described as a “neighborhood dispute.” People living on South Logan Street were shocked to wake up and discover a heavy police presence in their neighborhood Monday morning. State Police took the lead in […]
LOVINGTON, IL・14 HOURS AGO
WCIA

ASSUMPTION, Ill. (WCIA) – Three people are dead and another is seriously hurt after a Monday afternoon crash in Christian County. The crash happened at 1400N and 2500E road, two miles north of Assumption. Illinois State Police say two vehicles entered into the intersection and collided. One vehicle was a freightliner grain truck and the […]
CHRISTIAN COUNTY, IL・18 HOURS AGO
WCIA

SPRINGFIELD, Ill. (WCIA) — Springfield Police announced on Tuesday that more than 20 guns were seized Sunday morning after their suspected owner was arrested. Officials said Springfield officers were dispatched to a building in the area of 1st and Ash Streets for a report of a man inside while the fire alarm was activated. The […]
SPRINGFIELD, IL・14 HOURS AGO
WCIA

SPRINGFIELD, Ill. (WCIA) — Dozens of first responders gathered for a prayer service at the Cathedral of the Immaculate Conception Tuesday. The cathedral held the service, called a Blue Mass, that specifically prays for first responders.  “[The mass] takes its name from the blue uniforms that police and firefighters and public safety officials usually wear,” […]
SPRINGFIELD, IL・3 HOURS AGO

PANA, Ill. (WCIA) — The Pana School District entered a soft lockdown Tuesday. The Pana Police Department received two calls around 12:10 P.M. regarding a suspicious person riding a bicycle near North Hickory and Washington possibly carrying a long-gun strapped over their body. Officers quickly responded but could not locate the person. Due to the […]
PANA, IL・11 HOURS AGO
WCIA

LOVINGTON, Ill. (WCIA) — People in a small town in Moultrie County were shocked Monday morning when they saw a police presence and crime scene tape set up in their neighborhood. State Police and officers from Lovington have been processing the scene on South Logan Street throughout the day. State Police have taken the lead […]
MOULTRIE COUNTY, IL・1 DAY AGO
WCIA

CHICAGO (WCIA) — The Decatur Police Department announced on Friday that a suspect wanted for murder has been arrested. Lieutenant Scott Rosenbery said 18-year-old Kyle Escoe was located in Chicago and was arrested by officers of the Chicago Police Department on Thursday. He is being held at a CPD facility awaiting transport back to Macon […]
CHICAGO, IL・4 DAYS AGO
WCIA

‘A terrible tragedy:’ sheriff reminds drivers to slow down amid deadly crash

ASSUMPTION, Ill., (WCIA) — Many intersections in farming communities don’t have stop signs or yield signs, and one county’s sheriff wants people to know stopping and slowing down could save lives.  It comes after Monday afternoon’s deadly car crash just north of Assumption. Three people died and another was airlifted to a hospital. It happened […]
CHRISTIAN COUNTY, IL・7 HOURS AGO

Teacher arrested after fight with student

SPRINGFIELD, Ill. (WCIA) — A Springfield teacher was arrested earlier this week after he became involved in a fight with a student. Adrian Akers, a teacher at Lanphier High School, was arrested on Monday and is now on paid administrative leave. The student involved in this fight with Akers was injured to the point that […]
SPRINGFIELD, IL・4 DAYS AGO
WCIA

SPRINGFIELD, Ill. (WCIA) — An amendment has been filed to change the controversial SAFE-T Act’s pretrial release provisions.  Sen. Scott Bennett (D-Champaign) filed a bill Monday that changes conditions of prosecutors pursuing holding people accused of crimes. This is after several state’s attorneys and sheriffs across the state have openly criticized the SAFE-T Act.  Bennett says he […]
SPRINGFIELD, IL・15 HOURS AGO
WCIA

Man killed in crash on I-55 identified

MONTGOMERY COUNTY, Ill. (WCIA) — A 67-year-old man from northern Illinois was killed in a crash on Interstate 55 in Montgomery County on Thursday. State Police said their investigation indicated the victim, who was identified as Frank Amendola of Somonauk, was driving a semi-truck when he rear-ended another semi-truck that was slowing down as it […]
MONTGOMERY COUNTY, IL・4 DAYS AGO

SPRINGFIELD, Ill. (WCIA) — Memorial Health is offering drive-thru flu shots clinics in Springfield to the public to prepare for flu season. Flu shots are administered from 8 a.m. to 5 p.m. Mondays to Friday at a drive-thru lab at 2950 S. Sixth St. An appointment is preferred and can be made here.   Additionally, […]
SPRINGFIELD, IL・13 HOURS AGO
WCIA

Students and staff say those students will always be remembered in the community.
ASSUMPTION, IL・3 DAYS AGO
WCIA

DECATUR, Ill. (WCIA) — A pair of firefighters in Decatur were honored on Thursday for their efforts in rescuing a woman from a house fire. Captain Mike Emmerd and Firefighter Lucas Melton received commendations for their actions during a July 3 fire. Firefighters arrived at 230 South 16th Street and were informed an occupant was […]
DECATUR, IL・4 DAYS AGO
WCIA

ORLANDO, Fl. (WCIA) — A Taylorville native resides in Orlando in line of where Hurricane Ian is projected to attack. Sydney Wolf, who is part of the Disney College Program, has been working at Walt Disney World’s Magic Kingdom since August. Disney will close its parks on Wednesday and Thursday as Hurricane Ian is expected to advance to Category 4.
TAYLORVILLE, IL・9 HOURS AGO
WCIA

Veterans take off on honor flight

TAYLORVILLE, Ill. (WCIA) – Plans are in the early stages to revitalize Taylorville’s downtown square for future years. Taylorville resident Cindy Frisina recently acquired a handful of a storefronts for the project. Through her company, Heartland Development Partners, Inc, and a companion nonprofit organization, Revitalize Rural America, she plans to build upon the progress already being […]
TAYLORVILLE, IL・1 DAY AGO
WCIA

CENTRAL ILLINOIS (WCIA) — Several events across Central Illinois honored Hispanic Heritage Month this weekend. The Centro for Hispanic and Immigrant Community (CHICO) held their event at Fairview Park in Decatur. The event included music, dancing, food, face painting, balloon animals, and games for the whole family. “I wanted to be engaged around my people,” […]
DECATUR, IL・2 DAYS AGO
WCIA

CENTRAL ILLINOIS (WCIA) — Women who are either uninsured or underinsured have a chance to receive a free mammogram next month. The hospitals of the Memorial Health system will offer free mammograms to mark Breast Cancer Awareness Month, with most of the hospitals offering the free screenings every Monday in October. Each hospital has a […]
DECATUR, IL・4 DAYS AGO