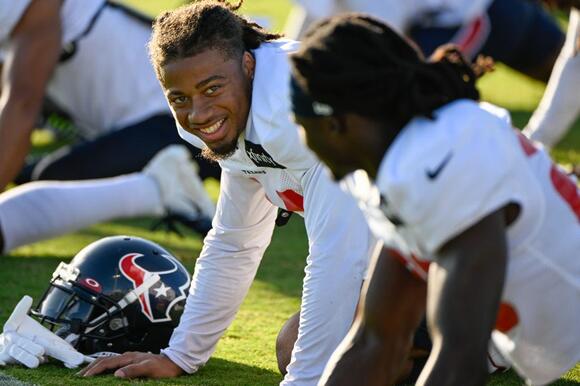 (SportsRadio 610) - Last season was challenging, frustrating and at times, just downright maddening on many fronts for the Houston Texans and their fans.

Yet, there was some good that came from it all.

While we’ve heard general manager Nick Caserio say it, along with coaches and players, that last year is the past and they’re beyond that.

However, the improvement the Texans made at turning the ball over is something head coach Lovie Smith says the Texans can continue to build on.

With Smith still coordinating the defense this season, he and the Texans made it a priority this offseason to continue to improve in the secondary.

Among the most notable, they signed veteran cornerback Steven Nelson, used two of their first three draft picks on Derek Stingley, Jr. and Jalen Pitre, picked up Isaac Yiadom and brought back Tremon Smith, Jonathan Owens and Tavierre Thomas.

Texans cornerbacks coach Dino Vasso said after Tuesday's practice he was already familiar with Nelson and has been pleased with how he’s made himself available to help out the younger, less experienced players.

“I’ve known Steve since he was a rookie, had him in Kansas City in 2015," Vasso said. "I’ve always known what he possesses tangibly, all the physical attributes he has, but I’ve been impressed with the intangibles that he brings to our room. The leadership, the mentorship, talking about Derek and Jacobi (Francis), they lean on him in the meeting room so I’m excited about it."

As for rookie corner Derek Stingley Jr., who suffered a torn ligament in his left foot (Lisfranc injury) and had surgery on it last September, the Texans maintain he is on schedule.

However, Stingley’s position coach said the team had not yet determined if he’d play Saturday against the New Orleans Saints.

“Right now it’s day to day," Vasso said. "He’s practicing with no restrictions so we’ll cross that bridge when we get there."

Vasso, along with the media and fans alike, can’t wait to see him in game action though.

“All you've got to do is watch him move," Vasso said. "I mean he’s twitchy. He’s explosive. He can run. He’s the prototypical corner and my job is to maximize those gifts and his talents."

The Texans are handling Stingley carefully this training camp, and it’s the right move, given that historically, players successfully coming back from a Lisfranc can be a mixed bag.

On average, football players that have undergone surgery to repair such an injury are sidelined for slightly more than 11 and a half months. Stingley had surgery in late September 2021, which at month's end, would put him right around 11 months of recovery.

For a guy they believe will be a big part of their future when healthy, they’re doing the right thing by taking it slow with him.

Thus, if you don’t see him on the field much, if at all Saturday night, it’s likely because it’s all a part of the plan.

Texans rookie safety Jalen Pitre intercepted Bears quarterback Justin Fields twice and sacked him once. They were his first interceptions and sack of his young career.
CHICAGO, IL・1 DAY AGO
610AM Sports Radio

The Texans continue to struggle with consistency throwing and running the ball. The Texans had a chance to win and blew it, which is getting to be a habit.
HOUSTON, TX・1 DAY AGO
610AM Sports Radio

Bijani: Avoiding the obvious not enough to dispel the inevitable with Texans' offense

The Texans had four chances Sunday against the Bears to extend drives and/or score in those opportunities, and failed to convert on any of them.
HOUSTON, TX・4 HOURS AGO
610AM Sports Radio

With the loss to Chicago, Houston drops to 0-2-1 on the season. The Texans return home next Sunday to host the Los Angeles Chargers at NRG Stadium.
HOUSTON, TX・1 DAY AGO