Gilman man accused of pushing kids out of moving car 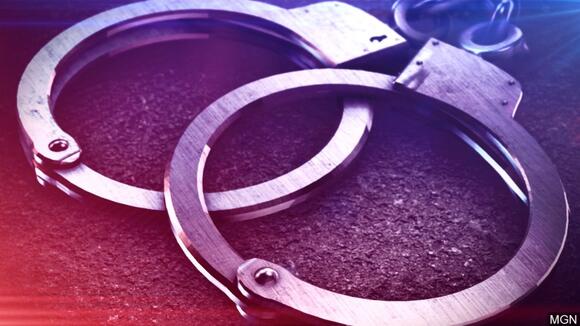 IROQUOIS COUNTY, Ill. (WCIA) — A 40-year-old man from Gillman was arrested last week in connection to an incident of children being pushed out of a moving car.

Jesse McGehee was charged with two counts each of domestic battery, reckless conduct and endangering the life of a child, along with a violation of an order of protection. The charges allege that McGehee was seen pushing two children, ages four and six, out of a moving car in the area of Park and Central Streets in Gilman. One of the children was injured and by the time officers with the Iroquois County Sheriff’s Police arrived, the car in question was gone.

McGehee was arrested after an investigation by the Sheriff’s Police into the matter. He was taken to the Iroquois County Jail and has since been released on bond.

Why not throw 2 more charges on him? Attempted murder seems fitting.

HOOPESTON, Ill. (WCIA) — Hoopeston Fire Department responded to a house fire call late Wednesday evening. Officials from the department said a passerby called in the fire. Around 11:30 p.m. HFD arrived at a house on fire at 728 East Thompson Road. The house is not a complete loss, but there is substantial damage, said […]
HOOPESTON, IL・1 DAY AGO
WCIA

CHAMPAIGN, Ill. (WCIA) — Champaign Police confirmed Friday morning that a church was vandalized overnight. Joe Lamberson, Champaign Police Public Information Officer, said an unknown suspect shattered the glass door on the front of a church located on Glen Park Drive near Mattis Avenue. He added that church leadership was contacted and is working to […]
CHAMPAIGN, IL・2 DAYS AGO
WCIA

Small fire sparks on U of I campus

URBANA, Ill. (WCIA) — A small fire happened earlier today at the U of I Dance Studio. Lt. James Kingston confirmed the fire may have started on the outside of the building. The Urbana Fire Department are still investigating it. They were able to put it out quickly. U of I Dance Studio is located […]
URBANA, IL・15 HOURS AGO
WCIA

CHAMPAIGN, Ill. (WCIA) — A person is displaced after a fire in their home, which firefighters said started from cooking. Around 9:45 p.m., the Champaign Fire Department arrived at a home at 1707 Carolyn Drive and put out a fire primarily contained in the kitchen. Once firefighters were on the scene, they reported smoke coming […]
CHAMPAIGN, IL・1 DAY AGO

Man charged after car stolen from U of I campus

URBANA, Ill. (WCIA) — An Urbana man is facing charges after police said he was involved in the theft of a car from the University of Illinois Campus. Two weeks ago, a U of I employee reported his car was missing from Parking Lot E-14, located across the street from State Farm Center. Using surveillance […]
URBANA, IL・4 DAYS AGO
WCIA

THOMASBORO, Ill. (WCIA) — A Champaign County School spent the last two days operating in a lockdown after a woman was arrested with a gun nearby. Brittany Baker was taken into custody on Tuesday for having a gun at West Side Park in Thomasboro less than half a mile away from the elementary school. School […]
THOMASBORO, IL・4 DAYS AGO
WCIA

Firefighters on scene at Rantoul fire

RANTOUL, Ill. (WCIA) — Firefighters are responding to a fire on Embassy Row. It is an active scene but no flames are visible to our crews. The fire chief said it was kitchen fire. Residents were not home at the time. Three cats were but they were rescued and are now safe. This is a […]
RANTOUL, IL・4 DAYS AGO
WCIA

A Mayor, Fire and Police Chief dance for charity

DANVILLE, Ill. (WCIA) — Three well-known Danville officials will be dancing for charity. Fire Chief Dan McMaster, Mayor Rickey Williams, and Police Chief Chris Yates will be dancing at the first annual Dancing for the Stars event hosted by the Survivor Resource Center. It will take place Oct. 1 at 7 p.m. at the Historic […]
DANVILLE, IL・2 DAYS AGO

CHAMPAIGN, Ill. (WCIA) — A pair of construction projects will restrict or close two roads in Champaign on Friday. Starting at 7 a.m. on Friday, a westbound lane of Clark Street will close between Neil and Randolph Streets in order to accommodate roofing operations on a nearby building. The closure is expected to be over […]
CHAMPAIGN, IL・3 DAYS AGO
WCIA

Man sentenced for attempted enticement of a minor

URBANA, Ill. (WCIA) — A Champaign man will spend eight years behind bars after he pleaded guilty to a charge of attempted enticement of a minor. Ozgur Kurt, 46, was sentenced on Tuesday in the U.S. District Court for the Central District of Illinois. Court documents showed that in 2020, Kurt engaged in sexually-graphic online […]
CHAMPAIGN, IL・4 DAYS AGO
WCIA

CENTRAL ILLINOIS (WCIA) — The Illinois State Police is awarding $1 million in grants to 32 city police departments and county sheriff’s offices across the state to help those agencies keep their communities safe. The Champaign Police Department and Christian County Sheriff’s Office are among the 32 agencies receiving funding. The grants are meant to […]
CHAMPAIGN, IL・4 DAYS AGO
WCIA

CHAMPAIGN, Ill. (WCIA) — With Champaign Central High School set to host a varsity football game at McKinley Field on Saturday, the City of Champaign announced on Thursday a series of parking restrictions around the field meant to accommodate the neighbors. The following streets located in the immediate vicinity of McKinley Field will be closed […]
CHAMPAIGN, IL・3 DAYS AGO

CHAMPAIGN, Ill. (WCIA) — Construction for a fiberoptic construction project is set to commence soon in Champaign. i3 Broadband will install fiberoptic utilities in an area bordered by Devonshire Drive to the north, Windsor Road to the south, O’Donnell Drive to the west and Prospect Avenue to the east. The project is expected to last […]
CHAMPAIGN, IL・4 DAYS AGO
WCIA

CHAMPAIGN, Ill (WCIA)– Champaign and University police used to do bar compliance checks. The goal is to make sure people are being safe and no one underage is serving alcohol or purchasing it.  This is not a new concept, but police had to stop during the pandemic because of Covid and due to a staffing […]
CHAMPAIGN, IL・4 DAYS AGO
WCIA

CHAMPAIGN, Ill. (WCIA) — A local child and family support group will be hosting a diaper drive next week to help families meet their needs. The Baby Fold and United Way of Champaign County will be hosting the diaper drive from 10 a.m. to 6 p.m. on Sept. 28. It will take place at The […]
CHAMPAIGN COUNTY, IL・4 DAYS AGO
WCIA

Community comes together at ‘Inspire! Concert for a Cause’

DANVILLE, Ill. (WCIA) – If you live in Danville, you may have hear some singing Sunday afternoon. Over 90 people sang for charity. A group of volunteers performed in the very first “Inspire! Concert for a Cause” event hosted by the East Central Illinois Community Action Agency. The non-profit works to combat poverty across three […]
DANVILLE, IL・10 HOURS AGO
WCIA

DANVILLE, Ill. (WCIA) – If you’re an avid golfer, you probably don’t expect to see bald eagles flying around the course. But at the Harrison Park Golf Course in Danville, people sometimes come out just to watch one eagle family. That’s why Wednesday was an exciting day – a rescue center released two eaglets there. […]
DANVILLE, IL・3 DAYS AGO
WCIA

MAHOMET, Ill. (WCIA) – A local author published her debut novel on Sunday. A few years ago, Cherie Roberson and her husband created a story about a real-life stranger who magically appeared from the fog on a Florida beach. “You should write that story!” Her husband said.  She accepted the challenge. “My goal wasn’t to […]
MAHOMET, IL・4 DAYS AGO
WCIA

CENTRAL ILLINOIS (WCIA) — With the summer air cooled down, high school football well underway, and grocery stores filled with Halloween candy, fall is officially upon us. In the coming months, you don’t have to travel too far away from home to enjoy what the surrounding areas have to offer. Here are the top five […]
ILLINOIS STATE・19 HOURS AGO