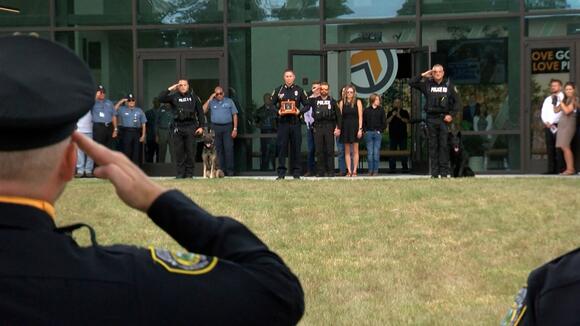 K-9 Max was shot and killed in the line of duty Aug. 3 by a domestic violence suspect, according to police.

“Each of the officers involved in that search are here today and alive because of Max,” said Lake Wales Police Chief Chris Velasquez.

Dozens of K-9 teams lined up as Max’s handler, Officer Jared Joyner, and his family followed the urn containing the K-9’s remains out of the church.

“We’ll always be grateful for K-9 Officer Max for his service, for the smiles he brought, for being a part of the Lake Wales Police Department and for ultimately giving his life to protect his very best friend,” said Chief Velasquez.

“They said he was small, reminded them of a water spider,” said Chief Velasquez.

“Max, who was by far the smallest dog in the school, showed no challenge was too great or obstacle too difficult to defeat. Truly – Max was fearless,” said Polk County Sheriff’s Office Lt. Kenny Hill, who was involved in Max’s training.

Max lived and worked with Officer Jared Joyner for the next nearly seven years.

At home, he would sneakily eat cat food and eggs from the chicken coop.

“Max had the funniest personality I’ve ever seen in a K-9. But Max had a mission. He was the eyes and the ears and the nose for Jared,” said Sgt. Dale Hampton with the Lake Wales Police Department.

A suspect, Earnest Borders, had reportedly assaulted a woman and fired a weapon outside an apartment complex, according to officials.

“Officer Joyner and Max had nearly made it home but Jared knew he might be needed so he turned around and headed to the scene,” said Chief Velasquez.

It was Max who located Borders in the woods. Police said Max had Borders by the foot and that Borders fatally shot him.

“I feel for Jared and his family. I feel for the officers that were on the scene that day. Just because the service is over, this is obviously not over. There’s emotions to deal with for a long time,” said Deputy Chief David Black.

Deputies in Florida formed a human chain to rescue a woman whose car was swept away by an extreme current in floodwaters.
ORANGE COUNTY, FL・22 HOURS AGO
WFLA

A Polk County deputy and a good Samaritan rescued an elderly man Thursday after floodwaters from Hurricane Ian rushed in near Frostproof.
POLK COUNTY, FL・1 DAY AGO
WFLA

Communities across Polk County felt the wrath of Hurricane Ian into the night on Wednesday.
BARTOW, FL・1 DAY AGO
WFLA

It's an unfortunate reality: Looters often show up when a hurricane hits, taking advantage of businesses and homes that have been evacuated.
PLANT CITY, FL・23 HOURS AGO

The number of deaths following Hurricane Ian's rampage in Florida is continuing to rise, according to reports.
FLORIDA STATE・7 HOURS AGO
WFLA

A St. Petersburg man was arrested Thursday after police said he threatened someone during an argument over one dollar.
SAINT PETERSBURG, FL・4 HOURS AGO
WFLA

A Riverview martial arts instructor was arrested Monday after he was accused of molesting his students, according to the Hillsborough County Sheriff's Office.
RIVERVIEW, FL・1 HOUR AGO

Thousands of Polk Co. residents, business owners face up to 4-day wait for power to return

As Hurricane Ian was blowing in and knocking down trees, Courtney Rizzuto and others were hopeful their lights would stay on.
POLK COUNTY, FL・20 HOURS AGO
WFLA

A 7-Eleven store was damaged and its roof torn off by winds in Polk County during Hurricane Ian effects.
POLK COUNTY, FL・2 DAYS AGO
WFLA

As the sun rises over southwest Florida Thursday morning, communities are left to grapple with the magnitude of Hurricane Ian's monstrous impact. Homes concealed beneath feet of flood surge, roofs ripped apart, trees strewn about, and many left wondering when things will return to normal.
MANATEE COUNTY, FL・2 DAYS AGO
WFLA

A helicopter captured a rescue from floodwaters in northeast Orlando on Thursday evening.
ORLANDO, FL・1 DAY AGO

Part of tree falls on home in Lakeland

A portion of a tree fell on a home in Lakeland during Hurricane Ian and now the homeowner is living in an RV because they do not have power.
LAKELAND, FL・2 DAYS AGO
WFLA

Hundreds of workers stationed at the Florida State Fairgrounds are assisting Tampa Electric in power restoration efforts across the Bay area.
TAMPA, FL・6 HOURS AGO
WFLA

An Tampa traffic light did not survive the harsh winds of Hurricane Ian, according to police.
TAMPA, FL・2 DAYS AGO
WFLA

The main concern for hundreds of thousands of people in Tampa Bay following Hurricane Ian is just getting the lights back on.
HILLSBOROUGH COUNTY, FL・18 HOURS AGO