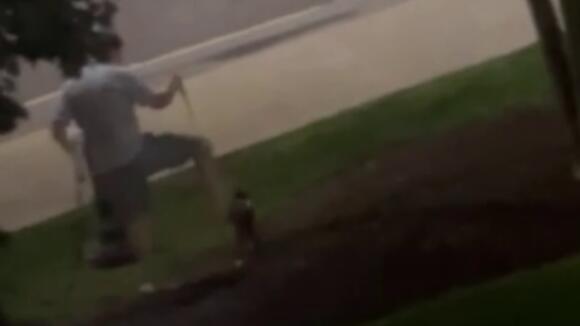 According to the Wilkes-Barre City Police Department, they were called to the 200 block of South Main Street for a report of animal abuse.

A witness told police that she recorded video of a man, later identified as Darren Snyder, 46, abusing his dogs on August 4, as stated in the affidavit.

Search for missing man in Wilkes-Barre

Investigators say the witness told them she has seen Snyder abuse his dogs while walking them.

In the video recorded by the witness, police say Snyder is seen “violently” pulling a small dog, lifting it by the leash until the dog is completely off the ground by its neck, and kicks the dog multiple times, according to court documents.

Authorities say in the video, Snyder tries to lift a larger second dog by the neck with the leash but was unsuccessful, however, he was seen kicking, and stomping on the dog’s back until it sat down.

The witness also said she saw Snyder kicking his dog two days early hard enough to hear the dog’s jaw clap closed from inside her work building, according to police.

Darren Snyder is the current Wilkes-Barre City Controller. Snyder has been charged with cruelty of animals, and disorderly conduct.

This man should be procicuted to the fullest extent of the law and lose his job. There really should be a site like Megan's Law for animal abusers that they have to register on. If there already is id like to know what it is

Im starting to NOTICE that big shot people do alot wrong things. And they have great jobs. But me!!!!!! Im homeless and living in woods. Its the truth With my 2 goldies. I have back pack for myself and one for the dogs. I make sure theyre ok. We go swimming down the creek and we camp out. Ive lost alot friends cuz of my partner. He fooled me. I still love him. Now i have no one. No one wants to help me. Im deaf.

WILKES-BARRE, LUZERNE COUNTY (WBRE/WYOU) — A man who police say was involved in a shooting at Chacko’s Family Bowling Center where he allegedly shot at a crowd earlier this year has pleaded guilty to his charges. On Monday, Shalik Aiken pleaded guilty to the charges of aggravated assault, terroristic threats, resisting arrest, and criminal mischief. Wilkes-Barre […]
WILKES-BARRE, PA・11 HOURS AGO
WBRE

WILKES-BARRE, LUZERNE COUNTY (WBRE/WYOU) — A man has been sentenced to 10 years after he admitted to causing serious and life-alerting injuries to his infant son. According to police, in June 2020, Andrew Dane Carter, 32, of Wilkes-Barre, was accused of injuring his 4-week-old son who suffered head trauma. On June 4, 2020, investigators said the […]
WILKES-BARRE, PA・10 HOURS AGO
WBRE

WILKES-BARRE TOWNSHIP, LUZERNE COUNTY (WBRE/WYOU) — A man and woman in Luzerne County were arrested on Tuesday and face charges for allegedly possessing 105 bags of drugs and thousands of dollars in cash. Officials said police responded to the Wilkes-Barre Township Walmart for the report of retail theft in progress on September 27. When officers […]
LUZERNE COUNTY, PA・5 HOURS AGO
WBRE

EYEWITNESS NEWS (WBRE/WYOU) — The Pennsylvania State Police in Wilkes-Barre announced they will be conducting DUI patrols on various roadways. According to PSP, the aim of sobriety checkpoints and roving patrols is to deter drinking and driving. Police say they are operating with a “zero-tolerance enforcement policy”. Various roadways within Luzerne County that have seen a […]
LUZERNE COUNTY, PA・1 DAY AGO

Because of the unsanitary conditions in the cell, the baby developed a type of staph bacteria infection that is resistant to many antibiotics, the lawsuit said.
WASHINGTON COUNTY, MD・16 HOURS AGO
WBRE

WILKES-BARRE, LUZERNE COUNTY (WBRE/WYOU) — On Wednesday, State Representative Matt Cartwright announced that $550,000 in federal funding will be donated to Wilkes-Barre’s Domestic Violence Service Center for area victims, from the Department of Justice (D.O.J.). Representative Cartwright says the funding will be donated to help with transitional housing assistance for local victims of domestic violence […]
WILKES-BARRE, PA・4 HOURS AGO
WBRE

(WTAJ) — A new study shows that Pennsylvania ranks number five for money lost in scams, with teenagers being a rapidly growing target. The study, released by socialcatfish.com, shows that money lost by victims under 20 grew by 1,125% over the last five years while seniors’ losses grew by 390% in the same time frame. […]
PENNSYLVANIA STATE・8 HOURS AGO
WBRE

SUGARLOAF TOWNSHIP, LUZERNE COUNTY (WBRE/WYOU) — Sugarloaf Township Police say a crash occurred between a student van and another vehicle on Monday evening. According to police, a collision occurred on Monday, at the intersection of Prospect and Tomhicken Roads, leading to a student van being overturned on its side in a local resident’s yard. Police […]
SUGARLOAF TOWNSHIP, PA・2 DAYS AGO

PHILADELPHIA, Pa. (WHTM) — Members of Pennsylvania- Task Force One (PA-TF1) are being deployed to South Carolina ahead of Hurricane Ian. According to a release from the Pennsylvania Emergency Management Agency, 45 members of the task force will deploy on Wednesday., Sept. 28 to South Carolina. Many of these members are part of the Philadelphia […]
PENNSYLVANIA STATE・9 HOURS AGO
WBRE

(WHTM) – The Pennsylvania State Troopers Association is splitting their ticket in this November’s general election. The association announced they will be endorsing Republican Mehmet Oz for U.S. Senate and Democrat Josh Shapiro for Governor. “Attorney General Josh Shapiro has shown his support time and time again for the men and women of the Pennsylvania […]
PENNSYLVANIA STATE・4 HOURS AGO
WBRE

A 3-year-old boy whose aunt is charged with pushing him into Lake Michigan has died, according to a family source.
CHICAGO, IL・2 DAYS AGO
WBRE

SUGARLOAF TOWNSHIP, LUZERNE COUNTY (WBRE/WYOU) — This time of year, many people associate cemeteries with Halloween. But this story isn’t scary, it is inspiring. One teenager saw a local historic cemetery as a Girl Scout Silver Award Project that would help her and her community. Erica Schwear has been in the Girl Scouts since fourth […]
SUGARLOAF TOWNSHIP, PA・2 DAYS AGO

EYEWITNESS NEWS (WBRE/WYOU) — The Department of Human Services (DHS) is encouraging Pennsylvanians in need of assistance with water bills or wastewater services to apply for a federal program called the Low-Income Household Water Assistance Program (LIHWAP) before the program closes on October 28. LIHWAP is designed to help families with past due water bills, […]
PENNSYLVANIA STATE・7 HOURS AGO
WBRE

WILKES-BARRE, LUZERNE COUNTY (WBRE/WYOU) — The City of Wilkes-Barre is alerting drivers to be prepared for a road closure on Saturday. According to a press release, South River Street between Northampton and South Streets will be closed on Saturday, October 1, from 9:00 a.m to 10:00 a.m. The road will be closed during the Kisses […]
WILKES-BARRE, PA・1 DAY AGO
WBRE

Fetterman fires back at Tucker Carlson over tattoo insults

(The Hill) – Pennsylvania Lt. Gov. John Fetterman, the Democratic nominee for Senate, on Sunday fired back at Fox News host Tucker Carlson over comments mocking his tattoos during a show earlier this month. “All your stupid little fake tattoos, it’s a costume, of course. Duh, it’s not real,” Carlson said of Fetterman during his […]
PENNSYLVANIA STATE・2 DAYS AGO
WBRE

LYCOMING COUNTY (WBRE/WYOU) — The Pennsylvania Lottery awarded an online prize worth $139,000 on the game Mine Blowing Jackpot, to a player from Lycoming County. According to officials with the Pennsylvania Lottery, the Lycoming County player won a total amount of $139,283.70. Mine Blowing Jackpot features a connect-style internet instant game with one progressive jackpot. Online players can […]
LYCOMING COUNTY, PA・1 DAY AGO
WBRE

More than $100 million in unpaid turnpike tolls -- that's the headline that has caught the attention of lawmakers. They are now working on ways to reel in that uncollected cash.
PENNSYLVANIA STATE・1 DAY AGO
WBRE

WILKES-BARRE, LUZERNE COUNTY (WBRE/WYOU) — Mayors from across the region met in Wilkes-Barre on Monday to discuss common problems and issues facing their communities. Mayor George Brown of Wilkes-Barre launched the get-togethers last year. The goal was to compare notes on common problems and possible common solutions. “I think if people see we work together […]
LUZERNE COUNTY, PA・2 DAYS AGO
WBRE

WILKES-BARRE, LUZERNE COUNTY (WBRE/WYOU) — Wilkes-Barre Mayor, George Brown announced Tuesday that the city will host its second annual ‘Oktoberfest.’ According to a press release, Oktoberfest is scheduled for Saturday, October 1, from 2:00 p.m. to 8:00 p.m. on Public Square in Wilkes-Barre. The event is sponsored by Xfinity and will include live music, food, […]
WILKES-BARRE, PA・1 DAY AGO