As elected Republicans condemn the FBI's raid of former President Donald Trump's Mar-a-Lago residence, many of them are saying out loud what they've been hesitant to discuss for nearly two years: Trump is likely to run for president again in 2024.

While Trump has been hinting at the prospect for months on end — including declaring that Democrats "desperately don't want me to run in 2024" in his statement announcing the raid — many Republicans in Congress and other elected positions around the country have generally declined to speculate on the former president's plans.

While President Joe Biden says he was unaware of the raid ahead of time, he indirectly oversees the independent Federal Bureau of Investigation, which is under the leadership of director Christopher Wray, a Trump appointee.

But that didn't stop Republicans from claiming that the raid — reportedly in connection with classified documents that Trump took with him to Mar-a-Lago — was politically motivated. In the process, they often acknowledged Trump's future presidential plans.

"The optics are especially disturbing considering that Presidents Biden and Trump are past and potentially future political opponents," said Republican Sen. Thom Tillis of North Carolina in a statement. "The DOJ owes the American people a thorough explanation."

Republican Sen. Lindsey Graham of South Carolina, a close ally of Trump, was even more direct.

"President Trump is likely going to run again in 2024," he wrote on Twitter, though he added that "no one is above the law."

And Republican Sen. Marco Rubio of Florida, a 2016 presidential candidate himself, released a video in which he referred to Trump as a "likely future election opponent." Trump "might, in fact, be running against [Biden] in a couple years," Rubio said in the video.

"Joe Biden is trying to use the FBI to subdue his top political opponent because they are afraid of him running in 2024," wrote Republican Rep. Diana Harshbarger of Tennessee.

"Joe Biden campaigned on bringing our country together, but his DOJ just raided the house of his former - and possibly next - political opponent," wrote Republican Rep. Kevin Hern of Oklahoma.

Other Republicans stopped short of acknowledging 2024 outright, but instead referred to Trump, in various terms, as Biden's "political opponent."

"This is a brazen weaponization of the FBI by Biden's DOJ against his political opponent," wrote Republican Rep. Steve Scalise of Louisiana.

And Republican Sen. Josh Hawley of Missouri, often mentioned as a potential future presidential contender himself, referred to Trump as Biden's "chief political opponent" as he called for Attorney General Merrick Garland to either resign or be impeached.

Former prosecutors and other legal experts told Insider in July that a 2024 announcement from Trump ahead of the 2022 midterms would be a "train wreck for the party," taking the focus of the election off of Biden and placing the divisive former president at the center of the discussion.

Additionally, experts said, running for president again would not shield Trump from his ongoing legal woes. 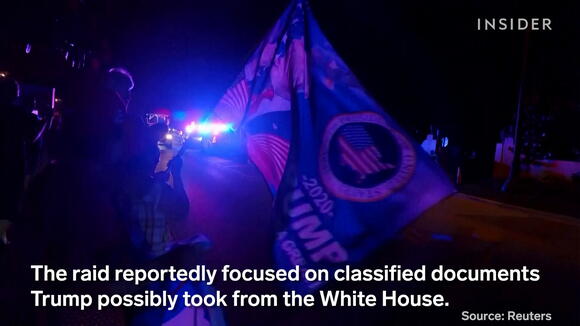 Trump will very likely go down in history as the only president the Governments were out to get.. Trump has proven he has more balls by standing up for the fight than most of are past presidents ever could of hoped to of had.

Hopefully President Trump comes back and this time no more mister nice guy, it’s time to Clean House,?Get All the Criminal Politicians out of DC

I figured things would heat up 🔥🔥with him coming close to revealing if he is running or not. They have been looking for something for six years now. If there were something there , they would have found it by now.

Trump blamed his supporters in 'the radical right' as the reason he didn't get the credit he thought he deserved for COVID vaccines while advising politicians not to 'make a big deal' out of the pandemic, book says

A new book reveals that former President Donald Trump told his aides not to wear masks in his presence. The book, by reporter Maggie Haberman, also said Trump told aides to avoid discussing the pandemic on TV. Haberman's book also reported that he told then-Gov. Andrew Cuomo not to "make...
POTUS・2 DAYS AGO
Business Insider

Donald Trump said in a Truth Social post that Sen. Joe Manchin had gone "off the rails." He commented that Manchin should have joined the GOP "long ago." Manchin was invited by Senate Minority Leader Mitch McConnell to switch sides last December. Former President Donald Trump suggested on Wednesday that...
POTUS・2 DAYS AGO
Business Insider

Trump asked his aides to get the NYT reporter Maggie Haberman's phone records, Politico reported. Trump has long been fixated with Haberman and once called her his "psychiatrist." Her book about the former president, "Confidence Man: The Making of Donald Trump and the Breaking of America," will be released next...
POTUS・1 DAY AGO
Business Insider

As Hurricane Ian barreled toward the Gulf Coast, former President Donald Trump emailed his supporters about a very different situation in Florida — the FBI raid of his home, Mar-a-Lago. "It has already been proven that so much has been wrongfully taken," Trump said in the email. "It was...
FLORIDA STATE・2 DAYS AGO

Following the Mar-a-Lago raid, Trump asked for (and was granted) a special master to review government docs. In a new filing, his attorneys argued that vendors don't want to work with them because of the volume of documents. In the filing, they said that "seasoned IT professionals" can't meet the...
POTUS・2 DAYS AGO
Business Insider

A Russian soldier was recorded saying he was told to 'kill everyone we see' in Ukraine, including civilians, which is a war crime, according to audio obtained by The New York Times

More than 4,000 recordings of Russian soldiers making calls from Kyiv were obtained by The New York Times. One Russian soldier told his girlfriend that he received orders to "kill everyone we see." UN investigators previously accused Russia of committing war crimes in Ukraine. One Russian soldier in Kyiv recounted...
MILITARY・2 DAYS AGO
Business Insider

Elon Musk asked Twitter to use 'Trump' as a search term to help calculate the number of fake accounts, report says

Elon Musk asked Twitter to include the word "Trump" in its analysis of fake accounts, per Bloomberg. Musk's lawyers said in emails that Trump's name was often associated with spam and bots accounts. Twitter's lawyers said they were "unpersuaded" by a request that would return too many results. Elon Musk...
POTUS・6 HOURS AGO
Business Insider

Trump officials sabotaged the Biden transition in petty ways, according to a new book by NYT reporter Maggie Haberman. One staffer stuffed photos of Hunter Biden into an air conditioning unit, causing it to break. "Confidence Man: The Making of Donald Trump and the Breaking of America" will be released...
PRESIDENTIAL ELECTION・11 HOURS AGO

Ginni Thomas told the panel investigating the January 6 attack on the US Capitol that her husband is "uninterested in politics," CBS reported.
CONGRESS & COURTS・1 DAY AGO
Business Insider

Obama privately told reporters before leaving office that America would be 'okay' after one Trump term but said 'eight years would be a problem': report

"I would be concerned about a sustained period in which some of these norms have broken down and started to corrode," Obama said, per Bloomberg.
POTUS・1 HOUR AGO
Business Insider

Trump wrote that he knew 'nothing' when asked about the presidential transition delays with Biden officials after the 2020 election: book

Trump wrote that he knew "nothing" about transition delays with Biden officials, per a forthcoming book. In "Confidence Man," NYT reporter Maggie Haberman remarked on Trump's responses to myriad questions. When Haberman asked Trump about the Biden transition holdup, he replied: "KNOW NOTHING ABOUT IT." Former President Donald Trump wrote...
PRESIDENTIAL ELECTION・2 DAYS AGO
Business Insider

Six states claim student-loan relief will hurt tax revenue, that Biden doesn't have the authority to cancel debt, and are seeking to pause the plan.
NEBRASKA STATE・2 DAYS AGO
Business Insider

"Donald Trump has one mode, it is all offense all the time," Barbara McQuade told MSNBC on Saturday.
POTUS・1 HOUR AGO
Business Insider

Trump asked Obama how he kept his approval ratings high in 2016, according to a forthcoming book by NYT's Maggie Haberman. Trump posed the question when the two men first met in the Oval Office after he won the 2016 election. Trump publicly skewered Obama but was privately fixated with...
POTUS・3 DAYS AGO

In a blow to the NRA, judge allows New York's attorney general to seek a court-imposed monitor and demand Wayne LaPierre forfeit millions

NY AG Letitia James gets a green light to seek financial monitoring for the NRA and to pursue multi-million-dollar penalties from CEO Wayne LaPierre.
CONGRESS & COURTS・1 DAY AGO
Business Insider

Alito made the comments during a Tuesday university speech during which he made no mention of Roe v. Wade's reversal.
CONGRESS & COURTS・2 DAYS AGO
Business Insider

US spy planes appear to be monitoring a Russian enclave in Europe, possibly looking for signs of nuclear weapons activity

Flight-trackers have spotted US surveillance plans flying near Kaliningrad, a Russian territory in Europe separate from the rest of the country.
MILITARY・2 DAYS AGO
Business Insider

Russian soldiers said they were 'fooled like little kids' and 'no one told us we were going to war,' audio obtained by The New York Times shows

Russian soldiers calling home from the frontlines in Ukraine complained about being misled and how poor the war was going, audio recordings show.
MILITARY・2 DAYS AGO