Get the latest breaking news, sports, entertainment and obituaries in Utica, NY from Utica Observer Dispatch.

Adorable baby zebra born in Utica Zoo. 'Everyone has fallen in love' 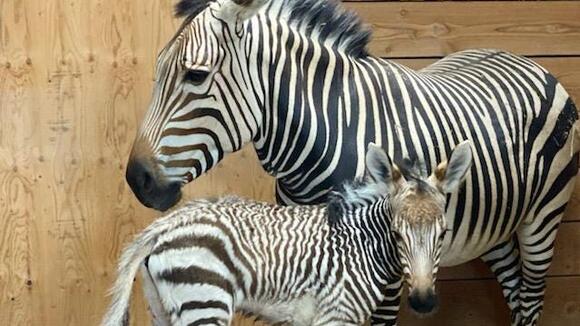 A baby zebra was recently born at the Utica Zoo, zoo officials announced in a statement.

Zecora, a Hartmann mountain zebra, had been with a male zebra at her previous zoo, where a suspected successful breeding occurred, zoo officials said.

The zoo said gestation for zebras like Zecora is 12 months and zoo animal care and veterinarian teams have been closely monitoring her over the last several weeks.

The female foal’s birth occurred without any complications and the yet unnamed baby zebra appears healthy, officials said.

“The birth of a baby zebra is always significant, more so due to the rarity of this subspecies in accredited North American zoos,” said Utica Zoo’s Deputy Director of Life Sciences Jay Pratte, in a statement. “Zecora has been a staff favorite since her arrival last year, and her caregivers could not be more excited about this event. Everyone has fallen in love with our new little girl, even if only from pictures.”

Zecora and her daughter are not currently visible in the exhibit's visitor viewing area, the zoo said. The zoo is currently allowing the new mother and daughter to have some close bonding time undisturbed in their holding barn and yard off exhibit.

Zoo officials did not note a firm date as to when mother and daughter would be available for public viewing.

According to the zoo:

The Utica Zoo built a new barn and outside yard in preparation for Zecora’s arrival in 2021. The new area was equipped with enrichment and training areas and space for an expanding herd, the zoo said.

Funding for the new bard and yard was made possible through various donor funds, the zoo said.

Similar renovations are currently planned for the habitat of Rundue, a Hartmann’s mountain stallion that has a separate barn near the zebras in African Ridge, the zoo said.

Get the latest breaking news, sports, entertainment and obituaries in Utica, NY from Utica Observer Dispatch.