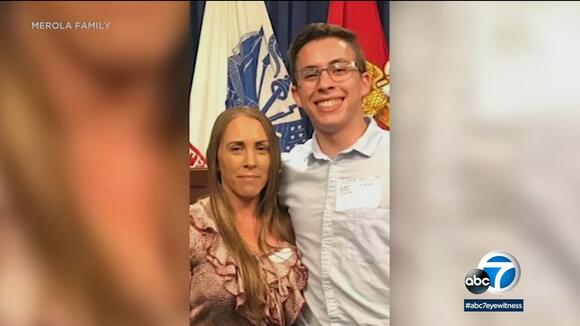 A special ceremony was held Monday at Disneyland Resort for Marine Lance Cpl. Dylan Merola, a Southern California native who was among 13 U.S. service members killed in a suicide bombing in Afghanistan last year. The family of Merola was acknowledged during the Disneyland Resort Flag Retreat Ceremony in Town Square. Merola's mother, Cheryl Rex, his grandparents and sister were in attendance. Rex was also presented with the Navy Achievement Medal. "It meant so much to me today to honor my son," said Rex. "As he was growing up, we attended a lot of things at Disneyland. We had season passes since he was little. It's very meaningful. It's a special place to us." Merola's brother Branden, who joined the Marines in January and graduated from Marine Corps Boot Camp on Friday, was also in attendance for the emotional ceremony. Merola was from Rancho Cucamonga and attended Los Osos High School. Merola, who was only 20 years old at the time of his death, was killed along with 10 other Marines, a U.S. Navy corpsman and a U.S. Army soldier, along with more than 100 Afghanis. Two other Southland Marines -- Lance Cpl. Kareem Grant Nikoui, 20, of Norco, and Cpl. Hunter Lopez, 22, of Indio -- also died in the attack. Marines Lance Cpl. Kareem Nikoui, Cpl. Hunter Lopez honored with memorials in Riverside County

Hundreds of mourners in the Inland Empire said prayers and their final goodbyes Saturday to two Marines killed in last month's bombing in Afghanistan.

Disney is the parent company of this ABC station.

Thank you for your service, your sacrifice and my freedom!🇺🇸 May God rest your soul! You will never be forgotten. Amén. ✝️🙏 My deepest sympathy and condolences to the family and friends. God bless you all...🙏💔Navy mom ⚓🇺🇲🦅🗽❤🤍💙

I'm sorry but Disney is just trying to improve their image. I really don't believe their concern about this young hero at all

Disney should of said THANK YOU to all that died that day.

The daughter of the late actor Michael Landon, who is best known for his roles in hit TV shows like "Bonanza" and "Little House on the Prairie", is asking for a possible witness in the death of her son to come forward and help in the investigation.
RANCHO PALOS VERDES, CA・2 HOURS AGO
ABC7

LA County cardrooms fight Prop. 26, which could subject them to damaging lawsuits

According to the sheriff's department, the woman was about 60 years old and was likely a resident of the Santa Clarita Valley. They're investigating this as an accidental death.
SANTA CLARITA, CA・5 HOURS AGO
ABC7

Bioluminescent blue waves are back on the California coast.
CALIFORNIA STATE・1 DAY AGO

What would you say if a total stranger walked up to you and offered to take you to Disneyland?
ANAHEIM, CA・3 DAYS AGO
ABC7

A wild street takeover near Compton was caught on video, which shows someone standing on top of a car and apparently throwing money in the air.
COMPTON, CA・1 DAY AGO
ABC7

Search and rescue crews found the body of a diver about 14 hours after he had been reported missing near Santa Catalina Island on Monday.
LOS ANGELES COUNTY, CA・2 DAYS AGO
ABC7

For the 1st time in over a month, gas prices in LA County did not increase overnight

A 33-day streak of increases that pushed the average price of a gallon of self-serve regular gasoline in Los Angeles County to records each of the past three days ended Thursday.
LOS ANGELES COUNTY, CA・8 HOURS AGO

Drivers all across the state are encouraged to ditch their cars Wednesday and try out other forms of transportation for California Clean Air Day.
CALIFORNIA STATE・1 DAY AGO
ABC7

Rapper Half Ounce fatally shot in Koreatown was father of 3 children with another on the way: Family

A local rapper known as Half Ounce was fatally shot in Koreatown. He was a father of three children with another on the way, family members told Eyewitness News.
LOS ANGELES, CA・1 DAY AGO
ABC7

A person of interest in the kidnapping of four family members in Merced County was taken into custody Tuesday, authorities announced.
MERCED COUNTY, CA・1 DAY AGO

Community leaders gathered in the downtown Los Angeles Fashion District to call on police to step up patrols in the area in response to the fatal stabbing of a business owner, and they called for the two teen suspects in the slaying to be tried as adults.
LOS ANGELES, CA・4 HOURS AGO
ABC7

Several suspects were taken into custody Tuesday morning after leading authorities on a wild chase that ended in a crash in the middle of the 91 Freeway in the north Long Beach area.
LONG BEACH, CA・2 DAYS AGO
ABC7

The families of two young students have filed a claim against the Santa Ana Unified School District after prosecutors declined to charge a substitute teacher accused of molesting four children.
SANTA ANA, CA・6 HOURS AGO
ABC7

Racist graffiti painted on an Apple Valley home is being investigated as vandalism. But one family wonders if it should be probed as a hate crime.
APPLE VALLEY, CA・1 DAY AGO
ABC7

Southern California on Thursday should expect warm temperatures and sunshine through much of the region.
ORANGE COUNTY, CA・11 HOURS AGO
ABC7

Apart from science, history and math, music and the arts have been proven to help students. That's what proponents of Proposition 28 hope voters understand.
CALIFORNIA STATE・1 DAY AGO
ABC7

A federal grand jury indicted three Long Beach men who allegedly participated in the daylight smash-and-grab robbery of a Beverly Hills jewelry store in which more than $2.6 million worth of merchandise was stolen.
BEVERLY HILLS, CA・13 HOURS AGO