WTWO in the Wabash Valley is the leading local source for breaking news and weather in Terre Haute, with the latest updates on mywabashvalley.com. 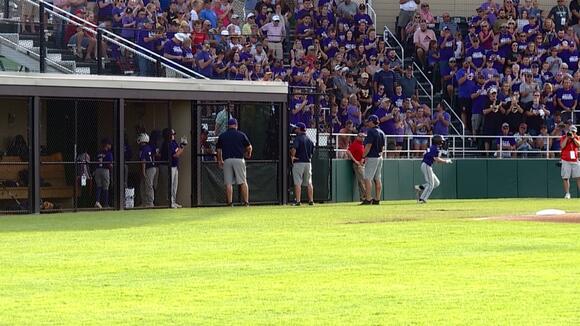 WHITESTOWN, Ind. — Hagerstown is rallying around some of its youngest athletes as they compete for a chance at the Little League World Series.

The town of less then 2,000 was decked out in purple Monday night. While hundreds watched from the Little League Central Region Complex in Whitestown, even more were watching at home on ESPN.

”It’s one of those situations when the town kind of shuts down for the evening,” said Shawn Murphy, the president of the Hagerstown Little League.

Hagerstown is a place for baseball and right now several 11 and 12-year-old athletes are making it a very happy place to be.

”Us parents are realizing, ‘Man, what kind of community we live in? We live in a community that’s selfless and wants to come out and support these kids,'” said Jay Hale, his son Jonah Hale is on the team.

Despite abortion ban criticism, Gen Con will return to Indy in 2023

Jay said it’s been a surreal experience for his son.

”His first game he said he’s never seen so many people out in the stands,” Jay said.

”We’re a small community, very close knit, so it’s awesome to see everyone come out here to support us,” Murphy said.

Murphy said it’s been great to watch these boys bond during this great run.

”Every time they break out of a huddle they say family,” Murphy said.

Is a hospital merger on the horizon in Vigo County?

Hagerstown Little League won districts, then state and then won it’s first game of regionals on Saturday. A win Monday means a shot at the championship game. Whoever wins then will play in the Little League World Series.

”We always try and tell the kids don’t let the moment be bigger than what you are, but this is an opportunity that a lot of these kids will never get again,” Murphy said.

Not to mention they’re playing on the worldwide leader in sports.

”It’ll be exciting to rewind it and go look at it and watch it and just see what they say about the kids,” Hale said.

Unfortunately, rain paused the game in the top of the second inning. Team Indiana and Team Kentucky will make up the game Tuesday at 3. Loser will play Wednesday and the winner will go onto the championship game on Thursday.

For the latest news, weather, sports, and streaming video, head to MyWabashValley.com.

CLINTON, Ind. (WTWO/WAWV) – The South Vermillion Wildcats won the Milk Jug for the 7th consecutive year after a 38-0 shut out of Riverton Parke. Dom Garzolini was 8 of 8 for 104 yards and 2 touchdowns. Dalton Payton rushed for 196 yards and had 2 rushing scores. Dallas Coleman returned the opening kickoff 85 […]
CLINTON, IN・1 DAY AGO
WTWO/WAWV

BRAZIL, Ind. (WTWO/WAWV) – The Northview Knights (4-1) will host the Terre Haute South Braves on Friday night in a matchup of two good teams. Kyle Cottee leads Northview against his uncle, South running back Josh Cottee. That’s not the only instance of familiarity between the two schools. Knights head coach Mark Raetz used to […]
BRAZIL, IN・3 DAYS AGO
WTWO/WAWV

INDIANAPOLIS – Something was said. Something consequential. But nobody’s fessing up. One of the pivotal plays in the Indianapolis Colts’ 20-17 come-from-behind win over Kansas City Sunday at Lucas Oil Stadium occurred after the Chiefs sacked Matt Ryan for the fifth time as the Colts were driving for the go-ahead score. After Nick Bolton got […]
INDIANAPOLIS, IN・20 HOURS AGO
WTWO/WAWV

On the Colts Blue Zone Podcast, Mike Chappell and company recap the game and offer takeaways from Indianapolis' win over the Kansas City Chiefs.
INDIANAPOLIS, IN・1 HOUR AGO

RICHMOND, Ind. – “Until we meet again, my love.” The words from fiancée Sierra Neal typified the heartfelt remembrances of Seara Burton, the Richmond K9 officer who died on Sept. 18 after being shot during a traffic stop on Aug. 10. Neal is Burton’s fiancée. The two met during the summer of 2021 and felt […]
RICHMOND, IN・9 HOURS AGO
WTWO/WAWV

On the Colts Blue Zone Podcast, Mike Chappell and company break down how Indianapolis can pick up their first win of the season against the Chiefs.
INDIANAPOLIS, IN・4 DAYS AGO
WTWO/WAWV

A Happy ending for an abandoned potbelly pig

VIGO COUNTY, Ind. (WTWO/WAWV) — It’s a happy ending for a potbelly pig that was abandoned at a Vigo County property. Tuesday, MyWabashValley.com told you about a man who’d found an unexpected visitor on his property in southern Vigo County. As of Friday morning, John Holcomb said the pig is on its way to a […]
VIGO COUNTY, IN・3 DAYS AGO
WTWO/WAWV

BLOOMINGTON, Ind. – A Monroe County special judge has blocked Indiana’s new abortion law from being enforced. Judge Kelsey B. Hanlon issued a preliminary injunction Thursday morning. The judge heard arguments in the case earlier this week. The ACLU of Indiana and a group of abortion providers filed a lawsuit to block the new law, […]
INDIANA STATE・4 DAYS AGO

TERRE HAUTE, Ind. (WTWO/WAWV) — An Indianapolis meth dealer who was arrested in Terre Haute has been sentenced to a dozen years in federal prison. According to the United States Department of Justice, Varonique Lowe, 44, of Indianapolis was sentenced to prison after pleading guilty to possession with intent to distribute methamphetamine. Court documents reveal […]
TERRE HAUTE, IN・4 DAYS AGO
WTWO/WAWV

Walmart will soon bring groceries right to your fridge

INDIANAPOLIS — Want fresh groceries from Walmart delivered right to your doorstep? How about directly to your fridge? Walmart announced they will now be bringing InHome delivery services to the residents of Indianapolis. InHome delivery services allow customers to order groceries and more from Walmart and have them delivered to the location of your choice: […]
INDIANAPOLIS, IN・4 DAYS AGO
WTWO/WAWV

PARKE COUNTY, Ind. (WTWO/WAWV) – The Covered Bridge Festival is set to start in just three weeks time. Officials close to the event say that they’re expecting about 1 million people to attend the event. With that many people in the county of only 17,000 people, that could mean big profits for vendors and local […]
PARKE COUNTY, IN・3 DAYS AGO

WTWO in the Wabash Valley is the leading local source for breaking news and weather in Terre Haute, with the latest updates on mywabashvalley.com.