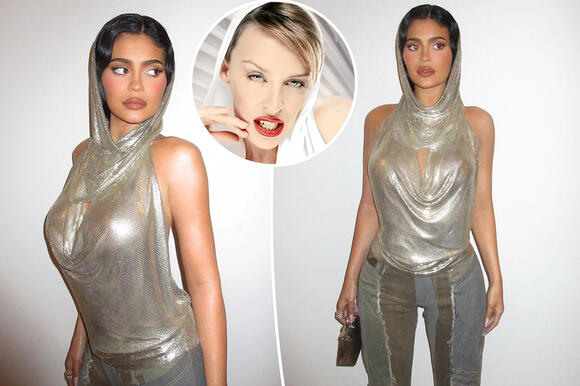 The 24-year-old beauty billionaire took style cues from the 54-year-old Australian pop superstar Sunday, stepping out for a date night with Travis Scott in a vintage hooded silver chainmail top by Paco Rabanne.

While Jenner may have nodded to Beyoncé in the caption of her Instagram post showing off the look — “forever i’m that girl !!!!,” she wrote, referencing the “Renaissance” track “Alien Superstar” — her metal mesh style recalled the hooded white jersey jumpsuit Minogue modeled in the music video for her smash hit “Can’t Get You Out of My Head” in 2001. 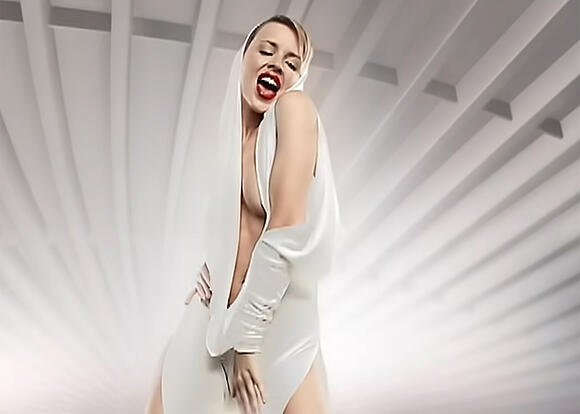 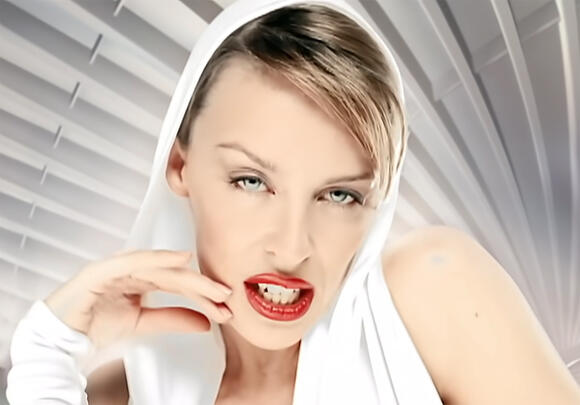 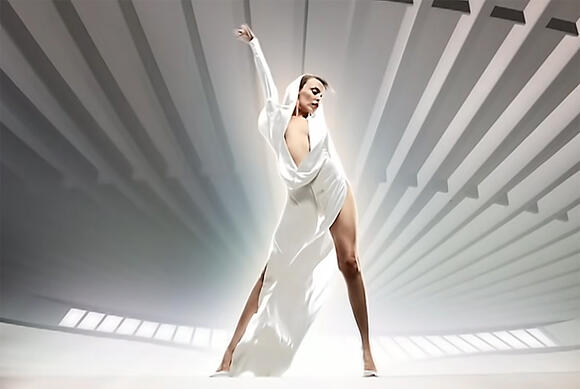 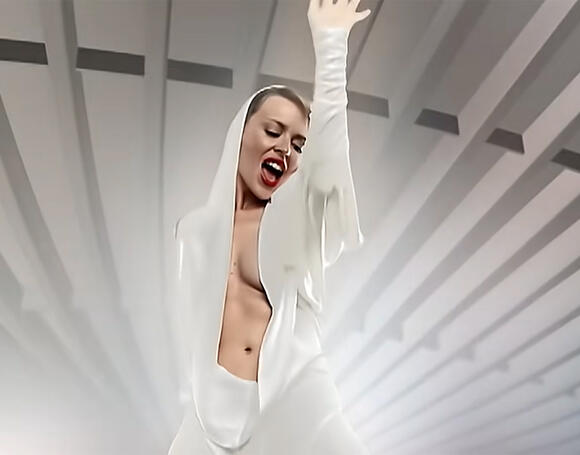 Jenner styled her top — which debuted on Rabanne’s runway in 1997, the same year she was born — with patchwork jeans, a gleaming silver Hermès Kelly bag and clear Yeezy heels.

She and Minogue have butted heads in the past, with the “Magic” musician blocking Jenner from trademarking their shared moniker for her beauty brand in 2017. In the opposition documents, Minogue’s legal team said the pop star had owned Kylie.com for decades, and referred to Jenner as a “secondary reality television personality,” claiming approval of her trademark would damage Minogue’s brand and confuse her fans. 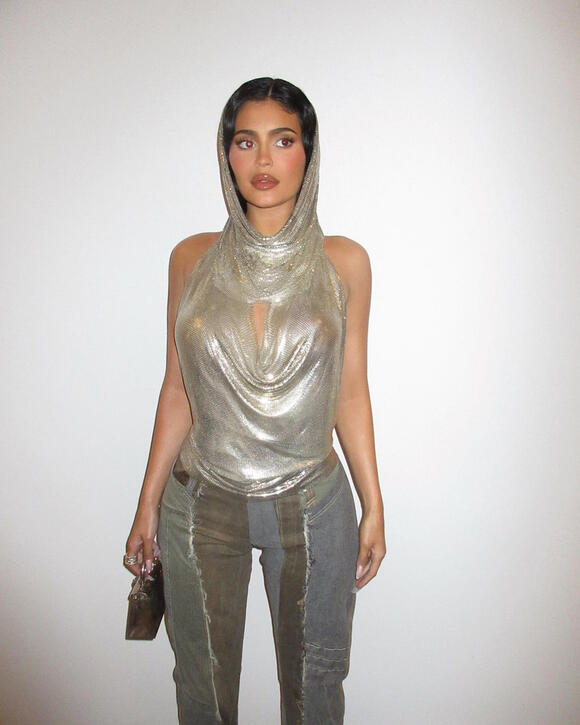 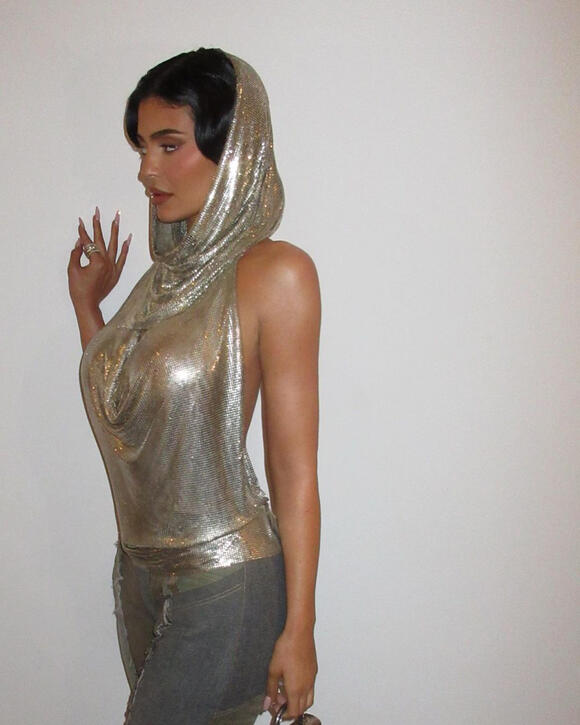 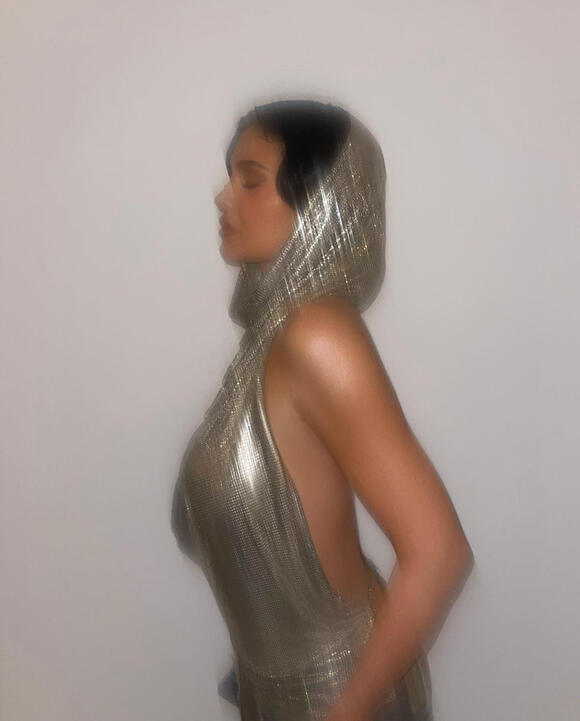 Minogue later apologized for that dig in a 2018 Rolling Stone interview , calling it “unfortunate” and adding, “That certainly did not come from me.”

While the “Kardashians” star went on to call her brand Kylie Cosmetics, Minogue launched her own makeup line in 2019 — using the name Jenner had wanted, Kylie.

“It was just business, obviously,” Minogue said during an appearance on “Watch What Happens Live with Andy Cohen” in June 2022.

“I’ve spent a lifetime protecting my brand and building my brand, so it was just something that had to be done. We came to an agreement.”

Fans are speculating that Khloé Kardashian’s daughter, True, revealed the name of Kylie Jenner’s son in the “Kardashians” Season 2 premiere. After the Good American co-founder, 38, welcomed her and Tristan Thompson’s baby boy via surrogate in July, she introduced the former couple’s 4-year-old to the infant via FaceTime.
CELEBRITIES・2 DAYS AGO
Page Six

“Holivia” is still hot and heavy. Harry Styles and Olivia Wilde packed on the PDA during a date in New York City on Thursday night. The couple passionately kissed and embraced each other in the streets of Manhattan. The pop superstar, 28, and the actress, 38, chose casual attire...
NEW YORK CITY, NY・1 DAY AGO
Page Six

Khloé Kardashian and Tristan Thompson’s baby boy made an adorable appearance on the Season 2 premiere of “The Kardashians.”. Kim Kardashian joined her sister, 38, in the hospital on Thursday’s episode, alongside her and Thompson’s surrogate. “Oh, my gosh, he looks just like True!” the...
CELEBRITIES・3 DAYS AGO
Page Six

Is celebrities’ love for Uggs reaching an all-time high? Stars including Gigi Hadid, Keke Palmer and Elsa Hosk have all recently stepped out in the brand’s new Classic Ultra Mini Platform Boots ($150), a 2-inch platform version of Ugg’s signature sheepskin boot. Hadid dressed hers down with a blue loungewear set for the September 13 opening of her Guest in Residence pop-up store in NYC, while Palmer wore an identical chestnut pair with her all-denim look the next day. While both stars opted to let the style shine on its own, it’s also a cinch to dress down with white socks — as...
APPAREL・2 DAYS AGO

Kris Jenner is so wealthy, she forgot she owned a Beverly Hills condo

Kris Jenner gave “Kardashians” viewers a behind-the-scenes look at her Beverly Hills condo on Thursday — but didn’t give a tour as she had forgotten she even owned the property. “This is a cute little place if I must say so myself,” the matriarch, 66, told...
BEVERLY HILLS, CA・3 DAYS AGO
Page Six

Grimes is debating a face tattoo: ‘Feels like it’s time’

Grimes is no stranger to white ink tattoos — and she’s now considering getting one on her face. The singer, 34, asked her Instagram followers for their opinion of the possible addition on Friday while sharing a colorful selfie. “I am very seriously considering getting a white ink tattoo on my face next week,” Grimes, whose real name is Claire Boucher, captioned the social media upload. “Any thoughts?” she asked. “It feels like it’s time.” Although the musician did not clarify when she snapped the selfie, it came nearly one week after she shared a photo of her bandaged face and sparked rumors that...
CELEBRITIES・2 DAYS AGO
Page Six

Johnny Depp and his newly revealed lawyer-turned-girlfriend, Joelle Rich, have been hiding in plain sight for months. Despite not having any official role in the movie star’s victorious defamation trial against ex-wife Amber Heard earlier this year, Rich was photographed at the Fairfax County Courthouse in Virginia nearly every day of the weeks-long trial that ran from April 11 to June 1. The London-based attorney, 37, represented Depp, 59, in his UK libel case against the Sun back in 2020. Despite the legal loss, the pair emerged lucky in love. According to endless photos from inside and outside the courthouse, Rich — a...
CELEBRITIES・3 DAYS AGO
Page Six

Pierce Brosnan’s boys look just like their dad! The actor’s youngest two children — Dylan, 25, and Paris, 21 — joined their father for an epic British GQ cover shoot, published on Thursday. The trio front the October 2022 issue in matching neutral ensembles by Fear of God, but wore plenty of wilder looks for the spread. Brosnan, 69, sported a statement Dolce & Gabbana suit with red jewels on the lapel and pockets while posing on the beach. Paris, for his part, rocked a sequined silver suit jacket from the same fashion house, while his older brother paired his sheer turtleneck with a...
CELEBRITIES・3 DAYS AGO

Greyson Chance doubles down on Ellen DeGeneres criticism: ‘I stand behind’ it

Ellen DeGeneres’ protégée Greyson Chance doubled down on his claims that the comedian is “manipulative” and “opportunistic” in a scathing new TikTok video. “I stand behind all of it,” the singer, 25, said on Thursday, shortly after his bombshell Rolling Stone interview about the talk show host, 64, was published.
CELEBRITIES・2 DAYS AGO
Page Six

Bryce Dallas Howard revealed that the executives behind the “Jurassic World” trilogy had issues with her body and her weight. “How do I say this … [I’ve] been asked to not use my natural body in cinema,” the actress, who played Claire Dearing in the movie, told Metro in an article published on Thursday. The actress, who performed her own stunts in the movies, added that it was director Colin Trevorrow who stood up for her. “And on the third movie, it was actually because there were so many women cast, it was something that Colin felt very strongly about in terms...
WEIGHT LOSS・3 DAYS AGO
Page Six

Adam Levine’s ex-yoga teacher: He treated me like ‘used trash’

Adam Levine’s former yoga instructor, the fourth of five women to accuse the married Maroon 5 frontman of sending suggestive messages, claims he treated her like “used trash.” “This isn’t about a love affair or a salacious text, it’s about being a decent human being,” Alanna Zabel, the musician’s personal yogi from 2007 to 2010, told the Daily Mail on Thursday. “Friends don’t treat each other like used trash, and that’s how he treated me.” Earlier this week, Zabel, 49, publicly accused Levine, 43, of once sending her a message that read, “I want to spend the day with you naked.” Though she thought...
YOGA・2 DAYS AGO
E! News

Sylvester Stallone and his wife, Jennifer Flavin, have decided to reconcile a month after the former model filed for divorce, his rep tells Page Six exclusively. “They decided to meet back up at home, where they talked and were able to work out their differences,” the spokesperson says. “They...
CELEBRITIES・2 DAYS AGO
Page Six

Who is Joelle Rich? What to know about the lawyer Johnny Depp is dating

Johnny Depp fans wanted nothing more than for the actor to date his attorney, Camille Vasquez, during his televised defamation case against ex-wife Amber Heard. Despite their chemistry on camera, Vasquez denied there was anything romantic between her and her client. But in a total twist of events, Page Six reported on Thursday that Depp dating one of his lawyers: Joelle Rich. The London-based attorney represented the actor in his UK libel case against the Sun two years ago. Here is everything to know about Depp’s attorney-turned-girlfriend. Partner-in-law Rich has a very successful career in law and is a partner at her London-based law...
CELEBRITIES・3 DAYS AGO
Page Six

“RuPaul’s Drag Race” star George Ward, best known by his stage name Cherry Valentine, died at age 28, his family announced. The performer died Sunday, but no cause of death is clear at this time. Ward found fame after landing a spot in the second season of “RuPaul’s...
CELEBRITIES・2 DAYS AGO
Page Six

Khloé Kardashian said Tristan Thompson “always knew” about Maralee Nichols’ baby — but pushed her for another one anyway. In the premiere episode of “The Kardashians” Season 2, which was released Thursday on Hulu, the Good American co-founder revealed her and Thompson’s surrogate was implanted with an embryo “days before Thanksgiving” 2021.
CELEBRITIES・3 DAYS AGO
Page Six

Kate Middleton is back in black. The new Princess of Wales made a touching sartorial gesture today while meeting palace staff and volunteers who helped during Queen Elizabeth II’s committal service at Windsor Castle on Monday, stepping out in the same coat she wore for her first public appearance after Prince Philip’s 2021 funeral.
BEAUTY & FASHION・3 DAYS AGO
Page Six

Lamar Odom tuned into the “Kardashians” premiere on Thursday — and had a “hard” time watching his ex-wife, Khloé Kardashian, struggle onscreen. The former NBA player, 42, told E! News that he wants the reality star, 38, to “find happiness … however she has to” in the future.
CELEBRITIES・2 DAYS AGO
Page Six

In a preview clip of Wednesday night’s episode of “The Late Show with Stephen Colbert,” the “Don’t Worry Darling” director defended her boyfriend, Harry Styles, amid claims he spit on Chris Pine. “He did not,” Wilde, 38, said with a laugh when Colbert asked....
CELEBRITIES・3 DAYS AGO
Page Six

Tori Spelling shared a rare pic of her and her mother, Candy Spelling, posing together via Instagram on Wednesday, declaring in her caption, “Life is short.” The snap was posted in honor of Candy, who turned 77 on Sept. 20. “Loved celebrating this goddess tonight,” Tori’s caption continued. “Hold those near and dear to you as close as you can. I love you with all my heart Mommy. Happy Birthday @candyspelling.” The “Beverly Hills, 90210” alum, 49, also shared a photo of the two of them with her younger brother, 43-year-old Randy Spelling, on Tuesday. “This was a special moment in time. I don’t...
CELEBRITIES・3 DAYS AGO