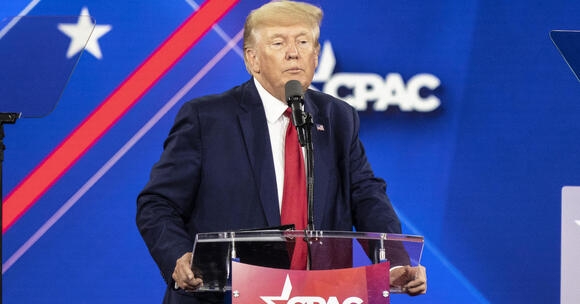 BOSTON - One question - does Attorney General Merrick Garland have the nerve and probable cause to go hard after former president Donald Trump - has been answered.

Now we await the answer to another key question: what's in those documents the FBI seized from Mar-A-Lago Monday?

That's the key to whether the events of Monday will be remembered as an unprecedented fishing expedition at the home of a former president that will cast more aspersions on the fishermen than the fish, as Trump and his allies immediately insisted, or a search that opened up an explosive new front in the multi-faceted criminal probes of the ex-president.

After all, there is no doubt that Trump - like others before him, but never to this extent - has in the past violated the Presidential Records Act. But there are no criminal penalties provided for in that law, and if the seized documents, however classified, are on the level of Hillary Clinton's infamous mishandled emails (e.g. ephemera), it's a big nothing-burger.

But what if the documents contain national security secrets, or evidence relevant to the ongoing investigations into the attempt to overturn the 2020 election result, the meddling with the Georgia vote count, and the Trump organization's tax returns?

In time, this will all come out in the wash. However, politics abhors a vacuum and these days, rushes to fill one with the most toxic rhetoric imaginable. Garland has proven to be a careful, clandestine prosecutor in this case, moving deliberately with no leaks. Even as the House Committee on January 6 rushes to get its work done before next January, when a potentially GOP controlled House will disband them, Garland, too is under time pressure. It's worth noting that Monday's search came just outside of the 90-day window before the midterm elections that has served as an unofficial deadline for Justice Department actions with potential political impact.

The language from top Republicans and the online right is already incendiary. They've never been interested in the truth about Trump, and won't wait for the facts. Democrats and other anti-Trumpers would be wise to let the legal system do the talking, but wisdom is not the coin of the realm these days.

And Trump himself is a happy man today in one sense. The search and the predictable right-wing uproar over it likely cements his decision to run for president again, and solidifies one of his favorite modes of political self-branding as a martyr to the conspiracy theorists' favorite cause, the battle against the "deep state." Believe it or not, that also makes many Democrats happy, the ones who believe their best chance of retaining power this fall is to have the most divisive figure in US political history atop the GOP.

So as the grotesquely polluted waters of American politics whip themselves into a frenzied whirlpool over the events of Monday, sane Americans should consider a few more questions as they await actual substance: if the former president was sharing or selling national secrets, do we really want to look the other way? If he wasn't doing anything beyond his usual disregard for process and protocol, what does that tell us about DOJ competence?

The truth will come out. If anyone has the patience to wait for it.

Yeppers,and he will win again this time too. Democrats won't be able to cheat this time.To maney people watch and will flood the polls. Watch and see.

and if the democrats thought that they could pull off a back to back coup like they did in 2020, they would welcome president Trump to run again... but they know they can't because all eyes will be watching and nothing will be taken for granted like it was in 2020...🇺🇲

Ted Cruz said Republicans don't criticize Donald Trump because he "punches them in the face" for it. Cruz said many Republicans asked themselves how to "deal with Trump" and his incendiary political style. Cruz also praised policy achievements under Trump, who was once a staunch opponent that insulted his wife.
AUSTIN, TX・2 DAYS AGO
Business Insider

Donald Trump once said New York Times reporter Maggie Haberman was like his "psychiatrist." Haberman said that while Trump treats many people like his psychiatrists, "almost no one really knows him." Haberman covered Trump's presidency extensively and interviewed him for her forthcoming book. Former President Donald Trump said reporter Maggie...
POTUS・1 DAY AGO
Business Insider

Rep. Nancy Mace says there's "a lot of pressure" on Republicans to impeach President Biden. On NBC's Meet The Press, Mace said impeachment is being considered by some in the GOP. She told host Chuck Todd that if the party chooses to hold a vote, she believes it will be...
CONGRESS & COURTS・1 DAY AGO
Business Insider

Trump has informed some political donors to stop boosting Ron DeSantis, per The Washington Post. During his calls with donors, the ex-president said that DeSantis could be a potential 2024 rival. Trump's endorsement of DeSantis' 2018 gubernatorial bid was a key moment in the governor's political rise. Former President Donald...
FLORIDA STATE・1 DAY AGO

A judge says he will be 'forced' to give Rudy Giuliani jail time unless the former mayor pays his ex-wife $225,000 by next month

Judith Giuliani said in a lawsuit that her ex-husband has fallen behind on alimony payments totaling $262,000, The New York Post reported.
NEW YORK CITY, NY・2 DAYS AGO
Newsweek

At an event with Republican Senator Mitch McConnell on Monday, Sinema vowed not to back down from her position on the filibuster.
ARIZONA STATE・20 HOURS AGO
The Associated Press

KYIV, Ukraine (AP) — KYIV, Ukraine — Ukraine’s presidential office says at least 11 civilians have been killed and 18 others wounded by the latest Russian shelling. A strike on the town of Pervomaiskyi, in the northeastern Kharkiv region, killed eight people, including a 15-year-old boy, Ukrainian officials said. Kharkiv Gov. Oleh Synyehubov said in televised comments that “the senseless shelling looks like an attempt to scare civilians.” In the eastern Donetsk region, the Russian barrage focused on the cities of Kramatorsk, Sloviansk and Toretsk, killing three and injuring 13 in 24 hours.
POLITICS・30 MINUTES AGO
Business Insider

Retired Supreme Court Justice Stephen Breyer says he did 'everything' he could to stop the overturning of Roe v. Wade

"Did I do everything I could to persuade people? Of course, of course," Breyer said during an interview with CNN's Chris Wallace.
CONGRESS & COURTS・3 DAYS AGO

Former National Security Agency contractor Edward Snowden, who fled the U.S. in 2013 after leaking classified information about U.S. government surveillance programs, responded on Monday to his newly granted Russian citizenship, which he received as the result of a decree from Russian President Vladimir Putin. Snowden, charged with espionage in the U.S., has been living in…
U.S. POLITICS・33 MINUTES AGO