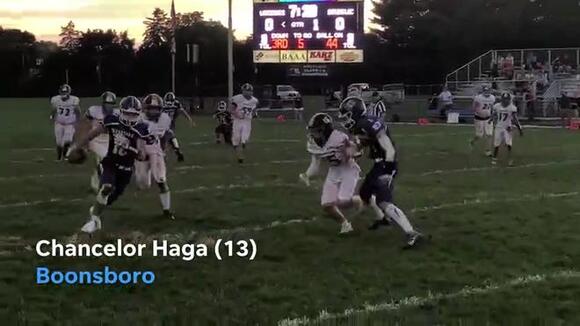 A 53-year-old Boonsoboro man was arrested after he allegedly poured gas in his Lanafield Circle home Thursday evening and threatened to burn it down, according to the Maryland State Fire Marshal's office.

Bruce William Lovins was charged with making an arson threat and reckless endangerment, according to a news release from the fire marshal's office. Both charges are misdemeanors.

Lovins was taken to the Washington County Detention Center and later released on a $5,000 unsecured bond, the release said.

Investigators responded to the 300 block of Lanafield Circle off Maple Avenue just before 5 p.m. Thursday after Lovins made arson threats toward family members, according to the release. The Boonsboro Police Department also responded.

Lovins allegedly grabbed a container of gasoline and began pouring the fuel throughout the home's living room, according to the release. He also stated he was going to burn the house down, it said.

Deputy State Fire Marshal Adam Rounds said in a criminal complaint filed in Washington County District Court that he responded to the house after Boonsboro Police arrived and spoke with Lovins. Rounds said Lovins told him that he was drinking throughout the day and got in a fight with another family member in the house.

Lovins admitted to pouring gas in the house but said he only did it to "make a statement," according to the complaint.

Rounds said he spoke with Lovins' former wife at the house who said Lovins was drinking throughout the day as he was working in a garage.

She told Rounds that she was on a work conference call in an upstairs bedroom when Lovins entered and threatened to kill her and another family member in the house. She said Lovins later threatened to burn down the house, according to the complaint.

Rounds said he observed a red plastic jug in the living room and could smell gas in it.

A trial in the case is set for Nov. 1, according to online court documents.