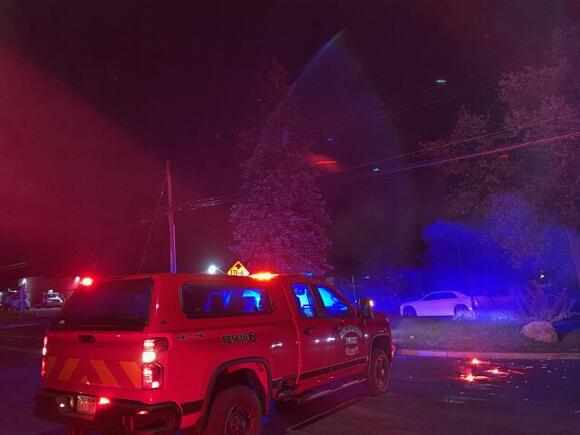 A large fire at a garbage and recycling facility required a big response from local authorities in Kalamazoo on Tuesday morning.

Crews battled the fire for over six hours inside Best Way Disposal off of Miller Road just east of the city's Milwood neighborhood.

The city of Kalamazoo's Fire Marshal Scott Brooks said the building is a total loss.

Authorities said the call came into dispatch at 2:18 a.m., and upon arrival, much of the inside of the building was engulfed in flames.

Heavy smoke was billowing out of the building for several hours, but flames could not be seen from the outside according to our Fox 17 crew at the scene.

Due to all of the trash inside, Brooks said it took a long time to put the fire out.

Miller Road between Emerald Drive and Millcork Street remained closed all morning but reopened to local traffic for businesses in the surrounding area just after 8 a.m.

Best Way Disposal said they're still working to figure out what will happen at this time for the garbage and recycling that is normally routed through their Miller Road facility.

According to their website, the company has two additional transfer stations nearby in Paw Paw Township and Lawton.

The cause of the fire is still under investigation. No injuries were reported.

Sheriff: 3 hospitalized after driver fails to yield in Ottawa Co.

An 84-year-old woman drove herself to the police station after being shot in Ionia County Tuesday afternoon, according to Michigan State Police.
IONIA COUNTY, MI・23 HOURS AGO
FOX 17 News West Michigan

At least two people are injured, after a rollover crash on I-96 in Kentwood. The driver was pinned and the passenger was ejected.
KENTWOOD, MI・1 DAY AGO

The crash happened at around 4:30 a.m. near Decatur Road and Dutch Settlement Street in Volinia Township, according to the Cass County Sheriff’s Office.
CASS COUNTY, MI・1 DAY AGO
FOX 17 News West Michigan

People in the Kalamazoo area will now be paying more for their water and sewer bills. City commissioners approved a rate hike at Monday night's meeting with a unanimous vote.
KALAMAZOO, MI・4 DAYS AGO
FOX 17 News West Michigan

As new developments creep in around a family farm, Alpine Township's future comes into question as development plans continue to grow in Master Plan
ALPINE TOWNSHIP, MI・2 DAYS AGO

The Kalamazoo County Board of Commissioners approved a $120 million budget for 2023. Commissioners say the goal is to prioritize DEI, public safety, recruitment and retention.
KALAMAZOO COUNTY, MI・2 DAYS AGO
FOX 17 News West Michigan

Antoine Court was recently given a merit award for innovation from NAHRO. Many people living in the apartment building have been waiting years for affordable housing vouchers.
GRAND RAPIDS, MI・1 DAY AGO
FOX 17 News West Michigan

If you're about to start planning your next wedding, the Fall Bridal Show might be able to help you out.
GRAND RAPIDS, MI・6 HOURS AGO

City of Watervliet to receive millions for wastewater system improvements

Mostly clear to partly cloudy skies are in the forecast tonight, with the coldest air of the season! Temperatures dive to the upper 30s in parts of West Michigan tonight.
GRAND RAPIDS, MI・2 DAYS AGO
FOX 17 News West Michigan