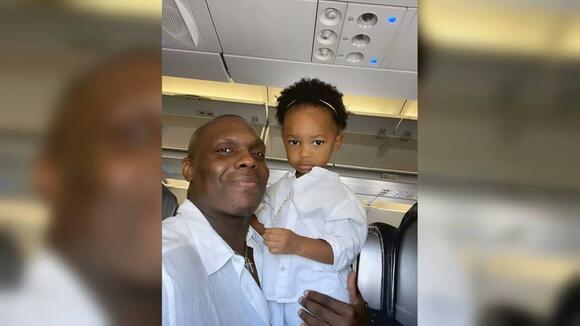 CLAYTON COUNTY, Ga. — An Atlanta man is back home with his daughter after they were removed from a Frontier Airlines flight, Channel 2′s Candace McCowan has learned.

This father says he purchased tickets on three airlines this past weekend for a quick trip to Orlando. On each of those flights, his daughter was sitting on his lap.

It was meant to be a weekend trip to the happiest place on Earth, but the magic stopped when one airline took issue and threatened to have him arrested.

Chrisean Rose and his two-year-old daughter Rayana were ready to fly home when they were told they were breaking a federal law.

“They will arrest you; I’m telling you that right now,” a flight attendant said to Rose.

Rose recorded as flight attendants threatened to arrest him while his 25-month-old Rayana was in his arms.

The ordeal started when Rayana wanted to sit in his lap on the flight from Atlanta to Orlando, even though he purchased a seat for the toddler.

“Spirit allowed for me to fly with her in my lap,” he said.

But on the return, Frontier staff had a different reaction.

The flight attendant told him Rayana had to sit in her seat.

“She’s a small kid; she’s nervous. I explained to the flight attendant that this is only our first time traveling and she’s a little bit nervous,” Rose said.

When Rose couldn’t get the toddler back in her seat, it escalated.

“It’s wrong for you to do that, I’m just trying to comfort her,” he said to the attendant.

The flight was taxiing, but returned to the gate after the confrontation.

The father and daughter were then forced off of the plane.

“It is an FAA requirement that all passengers over the age of 24 months must be buckled into their own seat for takeoff and landing. The parent refused to comply and therefore was asked to exit the aircraft with the child.”

Rose then bought another flight from Delta, where he says Rayana sat with him the entire time.

He’s acknowledged that there is a policy, but was hoping Frontier would be flexible like the others.

“I did not think it needed to be that far. I mean, arrest for what? For a kid crying?” he said.

The kid was barely one month over the age limit. There was absolutely no way for anyone on that plane to know that the kid wasn't 24 months instead of 25 months (eye roll). I understand rules, but there was definitely room for leniency in this situation. I've seen it done a million times on lots of flights that I've been on, & the rest of us on the plane are happy to not hear a screaming kid. This was just nit picky on the flight attendants part.

if the toddler was anxious and distressed, forcing her to stay in a seat will not work. Have more empathy. How do you know the child is spoiled?! SMH!

Those flight attendants must be very good to know the difference between a 24 month vs 25 month old child. I'll assume they didn't know the policy themselves.

ATLANTA — Flight delays and cancellations are expected as Hurricane Ian barrels toward Florida. Channel 2′s Bryan Mims went to Hartsfield-Jackson Atlanta International Airport on Tuesday, where he talked to people who drove up from Florida to Clayton County to catch a flight out of the storm’s path.
ATLANTA, GA・11 HOURS AGO
WSB Channel 2 Atlanta

ATLANTA — Atlanta police are investigating a shooting that left one person shot near Moury Ave. [DOWNLOAD: Free WSB-TV News app for alerts as news breaks]. Police responded to the Villages at Carver apartment complex around 9 p.m. after reports of a person being shot. Hearings begin on Georgia...
ATLANTA, GA・5 HOURS AGO
WSB Channel 2 Atlanta

ATLANTA — She’s a notorious jewel thief who stole millions of dollars’ worth of bling around the world. Nicknamed “Diamond Doris” — Doris Payne, 91 — is the focus of documentaries and books detailing her life as a jewel thief spanning cities across the world, especially right here in Atlanta.
ATLANTA, GA・1 DAY AGO
WSB Channel 2 Atlanta

ATLANTA — Atlanta police are investigating a shooting that occurred in Bankhead where a man and woman were shot, Capt. Christian Hunt said. According to Hunt, the woman told police two men were shooting at one another and she ran. [DOWNLOAD: Free WSB-TV News app for alerts as news...
ATLANTA, GA・1 DAY AGO
WSB Channel 2 Atlanta

ATLANTA — A man who police say assaulted a woman inside a bathroom at the Fulton County courthouse has been arrested. [DOWNLOAD: Free WSB-TV News app for alerts as news breaks]. Lester Walker was taken into custody Monday evening after a senior investigator with the Fulton County District Attorney’s...
FULTON COUNTY, GA・9 HOURS AGO
WSB Channel 2 Atlanta

FULTON COUNTY, Ga. — A local police lieutenant is out of a job after several officers accused her of causing a hostile work environment. The officers said she was stealing money and drinking on the job, among other claims. Now, the city of South Fulton has asked an outside police agency to investigate the matter.
SMYRNA, GA・1 DAY AGO

ATLANTA — Channel 2 Action News has learned there is a statewide shortage of medical examiners that is having a direct impact on local families. After a loved one dies, ﻿very often a medical examiner may have to help to determine how they died. If there are not enough MEs, that could mean a grieving family has to wait to bury their loved one.
GEORGIA STATE・3 HOURS AGO
WSB Channel 2 Atlanta

FORSYTH, Ga. — The Monroe County Sheriff’s Office is searching for an inmate who they say stole a city work truck and escaped from a city work detail. [DOWNLOAD: Free WSB-TV News app for alerts as news breaks]. A BOLO (be on the lookout) has been issued for...
FORSYTH, GA・1 DAY AGO
WSB Channel 2 Atlanta

GWINNETT COUNTY, Ga. — A Snellville family of seven is thankful that their neighbor was alert after their home caught fire early Monday morning. Gwinnett County firefighters were called to a home on Hidden Forest Drive just before 4 a.m. where they found the house fully engulfed in flames.
SNELLVILLE, GA・13 HOURS AGO
WSB Channel 2 Atlanta

BARTOW COUNTY, Ga — A mayor of a small Georgia city died in a motocross accident on Saturday morning, according to officials. Perry Bell, the mayor of White, Ga, died while competing in an event at the Lazy River Motocross outside of Dalton, according to interim Mayor Gary Crisp.
WHITE, GA・2 DAYS AGO

Clayton man was trying to rescue trapped family when he was hit and killed, loved ones say

ATLANTA — After his mother died in a violent attack, a metro Atlanta man was surprised to find a lien by Grady hospital filed in her name for more than $670,000 in hospital bills for her treatment. He learned the hospital never submitted the bill to Medicare or supplemental insurance.
FULTON COUNTY, GA・1 DAY AGO
WSB Channel 2 Atlanta

ADP: One shot after unknown SUV pulls next to victim and starts shooting

ATLANTA — One person was shot after Atlanta Police said an unknown SUV pulled up next to the victim and open gunshots. [DOWNLOAD: Free WSB-TV News app for alerts as news breaks]. On Sunday around 5:15 p.m. near 887 Ralph D. Abernathy Blvd. police located one person with a...
ATLANTA, GA・2 DAYS AGO
WSB Channel 2 Atlanta

PAULDING COUNTY, Ga. — The mother of two brothers killed in a Paulding County house fire called her sons her “pride and joy” and thanked the community for helping to raise the money to lay them to rest. [DOWNLOAD: Free WSB-TV News app for alerts as news...
PAULDING COUNTY, GA・1 DAY AGO
WSB Channel 2 Atlanta

Man convicted of terrorizing Asian families in Gwinnett, DeKalb, breaking into their homes

GWINNETT COUNTY, Ga. — A Gwinnett County jury has convicted a man of breaking into the homes of several Asian restaurant owners and employees between March and June 2019. Prosecutors say Emmanuel Rakestraw and at least three others followed their victims from Asian restaurants to their homes in Gwinnett and DeKalb counties before either attacking them or breaking into their homes later.
GWINNETT COUNTY, GA・1 DAY AGO
WSB Channel 2 Atlanta

Cobb teen goes to jail after going over 130 mph in a 55 mph zone, police say

COBB COUNTY, Ga. — A Powder Springs teen lands himself behind bars after speeding and reckless driving. Powder Springs officers were working the area of CH James Pkwy just before 3 a.m. on Sunday when two cars were racing at high-speeds. [DOWNLOAD: Free WSB-TV News app for alerts as...
POWDER SPRINGS, GA・1 DAY AGO