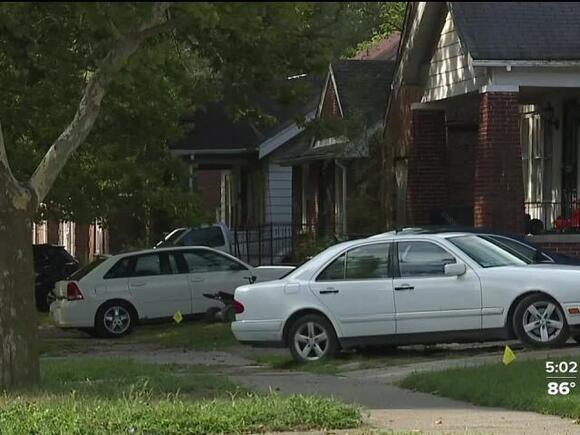 Gun violence continues across Detroit. This includes the two mass shootings that took place on Saturday.

One of them happened on the 19600 block of Andover Street. Seven people were playing a dice game around 10:18 p.m. According to a neighbor, that’s when a shooter came from behind a house and started firing.

A neighbor who witnessed the shooting said around 70 rounds were fired.

The sounds of gunfire rang out for seven minutes.

Sadly, a 35-year-old male was declared deceased at the scene.

Meanwhile, one victim is in critical condition. The other victims are expected to make a full recovery. But the police are still looking for the suspect.

Earlier in the day, the Detroit Police Department also responded to another mass shooting at the 13000 block of Saratoga .

Around 10:45 a.m., officers responded to shots fired at a house.

"They arrived at the scene, one victim was outside shot. They heard multiple people inside screaming, they forced entry into what is a known vacant narcotics location and discovered four other people shot," Detroit Police Department Deputy Chief Tiffany Stewart said.

One was pronounced dead on the scene while others are expected to make a full recovery.

DPD says a male suspect from Macomb County is in custody in connection to the shooting but still are urging people to call 1-800-SPEAK-UP if they have any information about of the two incidents.

Last week, Detroit Police Department Chief James White spoke about how his department is stepping up the fight against gun violence.

"All felony weapon arrest will be sent to the U.S. Attorney’s Office. For felon in-possession charges and those charges carry up to 10 years in prison and those federal charges," White said.

A proud Detroiter, Mary says its disheartening to see the city bleed but also feels the community needs to step up and speak up.

"I really believe it will take all of us to be a part of reducing the gun violence in our city. We can't just sit on the sidelines with family and friends and talk about it and point fingers at the police department and the city government," Sheffield said.

Shery has also launched a City Council Task Force on gun violence. It's in the initial phase. And soon, the team will unveil initiatives and programs to curb violent crimes across the city.

For Rose Anderson, not a day goes by where she doesn’t think of her son Kelvin Wheeler Jr., who was a father and a minister killed in July of 2020 on Detroit’s west side. He was just 34 years old...
DETROIT, MI・3 DAYS AGO
WXYZ Detroit - 7 Action News

“I don’t know why it’s happening in this community specifically, but there’s a lot of pharmacies here (in the Dearborn area)," Haidar reasoned.
DEARBORN, MI・2 DAYS AGO
WXYZ Detroit - 7 Action News

Police in Southfield are investigating after a pregnancy resource center was vandalized last week, adding that they believe the incident could be connected to a national abortion rights group.
SOUTHFIELD, MI・3 DAYS AGO

Police: EB I-96 at West Grand Blvd. reopens after incident with suicidal person

Detroit police have confirmed the closure of eastbound I-96 at West Grand Blvd. due to a suicidal person.
DETROIT, MI・1 DAY AGO
WXYZ Detroit - 7 Action News

A 19-year-old man is recovering after he was attacked by a woman carrying a “machete-style weapon” in Mt. Clemens.
MOUNT CLEMENS, MI・3 DAYS AGO
WXYZ Detroit - 7 Action News

Police: Man dies after being struck by Amtrak Train in Birmingham

Birmingham police confirmed to 7 Action News that a man died after being hit by a train there today.
BIRMINGHAM, MI・1 DAY AGO
WXYZ Detroit - 7 Action News

Saving lives in Detroit is at the center of a strong debate over a cutting-edge tool designed to fight crime. However, opponents say expanding ShotSpotter technology is costly and unproven.
DETROIT, MI・2 DAYS AGO

October is Breast Cancer Awareness Month, and events marking the fight against breast cancer bring thousands of women and men together in solidarity with survivors.
DETROIT, MI・13 HOURS AGO
WXYZ Detroit - 7 Action News

Cars & Coffee Detroit to be held on Saturday, September 24th

Cars, Coffee & The Motown Sound will feature over 60 classic cars and the chance for Motown fans and car lovers to connect over their love of cars and Motown stars.
DETROIT, MI・2 DAYS AGO
WXYZ Detroit - 7 Action News

A Woodhaven couple is without a home this morning after their condo burned to the ground. The consuming fire damaged surrounding homes in the area as well.
WOODHAVEN, MI・3 DAYS AGO

A Woodhaven couple is staying in a hotel after their condo burned to the ground Tuesday. The fire was so large it damaged multiple homes in the neighborhood.
WOODHAVEN, MI・3 DAYS AGO
WXYZ Detroit - 7 Action News

On Sunday, September 25, Spotlight on the News will interview Dr. Donald Taylor, the new president of the University of Detroit Mercy.
DETROIT, MI・2 DAYS AGO
WXYZ Detroit - 7 Action News

Gubernatorial candidate Tudor Dixon has drawn criticism for a comment she made during a campaign rally in Troy on Friday.
MICHIGAN STATE・3 DAYS AGO
WXYZ Detroit - 7 Action News

After decades of decline, Highland Park fights for a future

Highland Park was once one of America's wealthiest cities. Today, its residents are left to fend for themselves.
HIGHLAND PARK, MI・4 DAYS AGO
WXYZ Detroit - 7 Action News

'Such a blessing': Pontiac nonprofit gathers coats and toys for kids

A massive donation effort is underway to help kids receive warm clothes and toys in time for the holiday season.
PONTIAC, MI・2 HOURS AGO