MoonDoggie LIVERee named the final chapter of the Buckeye Trail 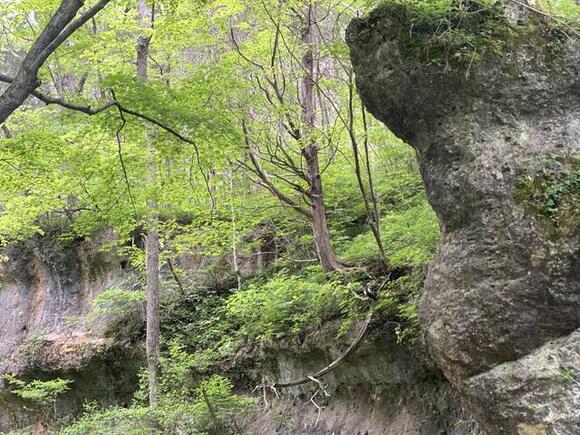 There is a 1,444-mile hiking trail that loops around the state of Ohio. The trail is appropriately named the Buckeye Trail – Go Buckeyes! Recently The Buckeye Trail Association named MoonDoggie LIVERee in Manchester, Ohio, as its final chapter location (well, final for now anyway). The LIVERee is not on the trail, but the owner, Nikki Gerber, will take care of the publicity and upkeep of that part of the trail. Gerber wants folks to “follow the magic,” She believes this final chapter of the trail holds enchantment and wonder. The biodiversity of this habitat keeps Gerber inspired, and she longs for others to appreciate what she has discovered.

Gerber doesn’t think that Hocking Hills has anything on Adams County. She hopes to promote the final chapter effectively and encourage places and people along the trail to participate. Gerber plans on visiting businesses along the trail to facilitate support. She stated, “I’d also like to connect the trails like the Adams County Mural Trail.”

The final chapter is still looking for a title, and Gerber loves the name “The Other Side of the Rabbit Hole.” When someone says they are going down the rabbit hole, it is a metaphor for being transported into a wonderful (or troubling) surreal situation. Wonderful and surreal are accurate descriptors for the unspoiled beauty and biodiversity of Adams County. Gerber says, “You can’t find the magic if you don’t follow it.” It could be an adventure to follow her down the rabbit hole and see what was on the other side. “If you don’t know where you are going, any road can take you there,” even a never-ending trail in Ohio.

By Sherry Larson People’s Defender It was a lovely Monday morning on September 1
WEST UNION, OH・1 DAY AGO
People's Defender

By Mark Carpenter People’s Defender Drama reigned in the second and final round
MANCHESTER, OH・2 DAYS AGO

We are Number One

We are number one. When we hear this phrase, it is usually followed by feelings of elation – of victory. This time there is n
ADAMS COUNTY, OH・3 DAYS AGO
People's Defender

Chandler, Boedeker reappointed to SSCC Board of Trustees

By Sherry Larson People’s Defender On the afternoon of Wednesday, September 14 a
PEEBLES, OH・6 DAYS AGO
People's Defender