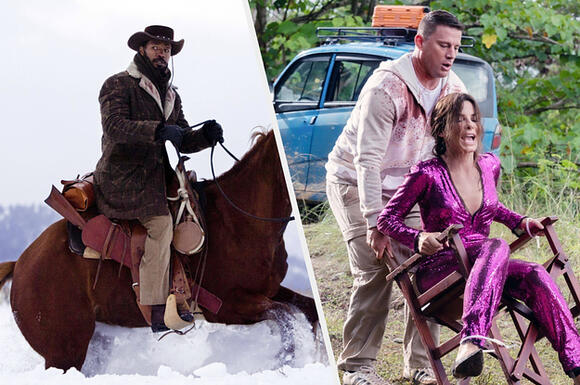 Last week, Netflix announced that they were in development with a sequel and a spin-off for The Gray Man , their latest in a line of ultra-high-budget, star-studded action projects following Red Notice and the upcoming Glass Onion: A Knives Out Mystery .

Whether or not The Gray Man eventually becomes a modern action classic remains to be seen, but with the sequel hype being met with more curiosity than excitement, this writer was inspired to put together 19 action movies that are more deserving of a sequel (and might not need $200 million to do so)...

5. The Quick and the Dead

15 Weird Behind-The-Scenes Movie Facts I Bet You've Never Heard Before (Or Maybe You Have, IDK, I Don't Know Your Life)

Christopher Nolan sure did plant a whole lot of corn for Interstellar!
MOVIES・2 DAYS AGO
BuzzFeed

I'm not even joking when I say that Jerry Trainor deserves an Emmy for iCarly.
TV SHOWS・1 DAY AGO
BuzzFeed

27 Movie Monologues That Are So Expertly Acted, They May Just Be The Best Of All Time

WandaVision and Daredevil are the elite shows of the MCU.
TV SERIES・2 HOURS AGO

The new Hocus Pocus is finally here, so let's see what lil' Max Dennison is up to today. Spoiler: He's 46 now.
MOVIES・9 HOURS AGO
BuzzFeed

Jennette opened up about her relationship with her mother in her new book I'm Glad My Mom Died.
FAMILY RELATIONSHIPS・1 DAY AGO
BuzzFeed

The "Harry Potter" Movies Honestly Aren't All That Magical Because Let's Face It: Every Character Is Pretty Ordinary

The Gryffindor kiddos had personal mementos, like framed pictures of their parents and flags of their favorite sports teams, on their bedside tables — just like the rest of us.
MOVIES・11 HOURS AGO

A Digital Artist Used AI To Show Us What Celebrities Who Died Young Would Look Like Today, And It's Surprisingly Emotional

I wasn't prepared to see Kurt Cobain as a middle-aged man.
CELEBRITIES・6 HOURS AGO
BuzzFeed

It's out now, and yet the drama surrounding the twisty Olivia Wilde–directed thriller just won't stop.
MOVIES・2 DAYS AGO
BuzzFeed

33 TV Shows That People Once Loved, But Eventually Had To Break Up With

" Lucifer should have ended with Season 4. The season was ridiculously good; there was so much character growth and each episode advanced the storyline — it was awesome and ended on such a powerful note for Lucifer and Chloe. But then for the next two seasons, the writers did NOTHING with that."
TV SERIES・11 HOURS AGO

Netflix's "Dahmer" Is Getting Criticized By People, Including The Family Of One Of His Victims, And Here's Why

The family of one of Jeffrey Dahmer's victims is calling out the new Ryan Murphy–produced Netflix series for "making money off of this tragedy."
TV & VIDEOS・8 HOURS AGO
BuzzFeed

"If you look at the Instagram version of her life, she’s got it all. And she killed herself. Now, to me, that’s the most important thing. It’s not the rest. It’s not the moments of strength."
MOVIES・6 HOURS AGO
BuzzFeed

Abuelos and Abuelas say the darndest and most accurate things sometimes.
FAMILY RELATIONSHIPS・1 DAY AGO
BuzzFeed

The Reason Marvel Chose Not To Recast Chadwick Boseman In "Black Panther: Wakanda Forever" Had To Do With Something Stan Lee Once Said

Chadwick Boseman passed away in August 2020 after a battle with colon cancer.
MOVIES・2 DAYS AGO
BuzzFeed

"It's been 10 YEARS and Criston is still screaming, crying, throwing up, whenever someone mentions Rhaenyra."
TV SERIES・2 DAYS AGO
BuzzFeed

31 TV Scenes That Are Absolutely Heartbreaking, But Don't Involve A Character Dying

The moment on Grey's Anatomy when all the female doctors lined the hallway for a patient still gives me chills.
TV SERIES・5 HOURS AGO
BuzzFeed

From The Set Of “Do Revenge”: How Maya Hawke's Blonde Wig Was Created, How Camila Mendes' Hair Stayed Sleek In The Miami Heat, And More On-Set Secrets

Because Maya Hawke was filming 'Stranger Things' at the same time, her character's hair and makeup had a very different approach.
CELEBRITIES・1 DAY AGO
BuzzFeed

The last five seasons of Riverdale are typing...
TV SERIES・10 HOURS AGO