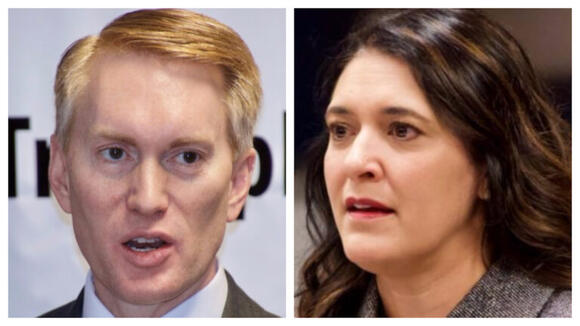 Conservative lawmakers are engaged in a tearful and untruthful jeremiad this week, rending their garments over passage of the Inflation Reduction Act, landmark legislation that is already reducing inflation forecasts for the next three fiscal years.

Provisions of the Inflation Reduction Act include: lowering of Medicare prescription costs, a $2,000 per year cap on out-of-pocket expenses for Medicare recipients, a $500 average reduction per household for energy costs, a 40% reduction of 2005-level carbon emissions by 2030, access to the Affordable Care Act for an additional 13 million Americans and an ACA premium reduction of $800 per year.

Oklahoma’s Republican congressional delegation is particularly rueful, because the new law’s provisions, which will benefit the majority of state residents, are funded through a minimum 15% tax on billion-dollar corporations, increased funding for the Internal Revenue Service to ferret out cheats and loophole seekers, a 1% tax on stock buybacks, and an increased tax on individuals making $400,000 or more per year.

According to the 2020 U.S. Census, Oklahoma’s median household income is $53,840, and Oklahoma’s representatives and senators are lying to rank-and-file Oklahomans about how the provisions of the Inflation Reduction Act will be funded. On Aug. 7, U.S. Sen. James Lankford retweeted a lie from his prevaricating equal in North Dakota, U.S. Sen. Kevin Cramer, saying the law “will increase taxes by $16.7 billion in 2023 on people earning less than $200,000 a year.”

Not surprisingly, this number was cooked up by the Heritage Foundation and its fake news source, Daily Signal, and U.S. Rep. Stephanie Bice was hurriedly tweeting out this nonsense the day after the bill passed.

Lankford followed this up with his own tweet, one nearer and far dearer to his necrotic heart. “Democrats would rather push unfair penalties on oil & gas companies to further their own progressive climate-change agenda than lower energy costs for Americans.”

For people who actually follow national news, Lankford’s claim is darkly funny. In 2017, former President Donald Trump’s Tax Cut and Jobs Act dramatically cut the effective tax rate for corporations, and oil and gas benefitted the most from Trump and his Republican allies’ largesse. One provision specific to oil and gas allowed such companies to defer payments on 50% of federal income tax. As a result, the 20 largest O&G companies paid 11.7% of their pretax earnings, which is nearly 24% below non O&G corporations.

Implicit in Lankford’s tweet is a threat that oil and gas companies, taxed at a fairer rate, will pass on their IRS bills to consumers, who have been gouged this summer by opportunistic pricing from these same companies.

Much of what was called “inflation” over the summer was the direct result of skyrocketing energy prices, which in turn trickled down to consumers through the cost of everyday purchases — it cost more to distribute household goods because of high energy prices. Republicans blamed President Joe Biden for the energy prices, which are never set by the president, regardless of which party occupies the White House.

If anything, the recent price gouging by petroleum producers should inspire more people to embrace renewable energy sources. Even in Oklahoma, a place where the economy is closely tied to oil exploration and production, there is an opportunity to create new jobs and build industries around cleaner energy. Petroleum is a finite source — it will run out someday — but anyone who has suffered through this infernal Oklahoma summer knows that wind and sun is perpetual in this state.

Lankford and the rest of Oklahoma’s arch-conservative delegation continue to show themselves as the foremost spokespeople for dead and dying ideas. Under the Inflation Reduction Act’s energy and health provisions, more Americans might not choke on those ideas.

To the editor: Blade editorial distracts from real divider

Again The Blade bares its core in the disturbing editorial on President Biden. It seems the word salad of this particular editorial is slamming President Biden regarding loan forgiveness for college students. Let’s face it. The root of that whole issue is greed and the rise in tuition rates to the point that payment for the majority of students is impossible. Rather, you should be concerned with the threat to our democracy and the political divide in this country, for which former President Donald Trump is personally responsible. Never has there been a president who has repeatedly broken his oath of office to defend the Constitution.
POTUS・18 MINUTES AGO