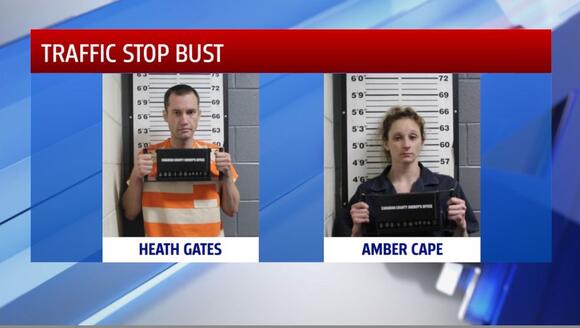 Two people are now behind bars as a result of the bust.

OKCPD: Man kills his 3 young children, then himself

After crossing the center line off Main Street and Highway 81 in the middle of Union City, both Heath Gates and Amber Cape found themselves with an officers’ flashing lights in their rearview.

Chief Adam Taylor, with the Union City Police Department, said after identifying Gates, they found out he was no stranger to run-ins with law enforcement.

“We realized that he had some outstanding warrants out of Oklahoma County,” Taylor said.

Gates was wanted for domestic assault and battery by strangulation with a dangerous weapon, as well as kidnapping and felon in possession of a firearm. They took Gates into custody where Taylor said he admitted to some meth and a firearm being in the car.

However, when officers searched it, they found a lot more.

“It just shows that nothing’s ever routine,” Taylor said. “You never know what you’re going to find on a traffic stop.”

Oklahoma Highway Patrol’s Bomb Squad unit was called in to get the grenades. Taylor said over the last several years, this is just one example of the multiple they’ve seen.

“We have quite a bit of drug trafficking on 81. We’re consistently seizing large amounts of narcotics on the highway almost weekly,” Taylor said. “Methamphetamine, we’ve had large marijuana busts from illegal grow operations. This is the first that we’ve seen grenades obviously.”

Both Gates and Cape were booked in the Canadian County Jail on multiple charges.

OKLAHOMA CITY (KFOR) – Oklahoma City Police are on the scene of a shooting involving a police officer. The incident happened near NW 18th and Tulsa Ave. Officers were responding to a 911 call of an armed man threatening suicide said OKCPD public information officer Gary Knight. The shooting...
OKLAHOMA CITY, OK・5 HOURS AGO
KFOR

An Oklahoma City man was arrested Thursday and charged with the murders of four people dating back almost a decade.
OKLAHOMA CITY, OK・1 DAY AGO
KFOR

With the recent national attention on school shootings, the Oklahoma County Sheriff’s Office is working to train the entire Sheriff's Office in knowing the ins and outs of every single school within Oklahoma county.
OKLAHOMA COUNTY, OK・19 HOURS AGO
KFOR

The Purcell Police Department tells KFOR a city utility customer had a dispute about whether his utilities were on or off. It then escalated into a physical confrontation with one of the city employees inside city hall.
PURCELL, OK・2 DAYS AGO
KFOR

A man who was convicted of killing one of his roommates has been sentenced.
OKLAHOMA CITY, OK・2 DAYS AGO
KFOR

Days after KFOR aired a story about a family in Edmond who lost $17,000 in tools after they were stolen from their truck, several Oklahomans called our station asking what they could do to help.
EDMOND, OK・1 DAY AGO
KFOR

According to the Oklahoma Highway Patrol, an 11-year-old has passed away as a result of a vehicle accident in Blaine County on Saturday.
BLAINE COUNTY, OK・1 DAY AGO

As the community mourns the loss of an Oklahoma City police officer, a local organization is working to support her family.
OKLAHOMA CITY, OK・2 DAYS AGO
KFOR

A devastating fire wiped out a home near East Maple and Highway 24 two weeks ago and the family lost nearly everything.
WASHINGTON, OK・1 DAY AGO
KFOR

Motorcyclist killed in crash with semi-truck

Officials say a motorcyclist is dead following a crash with a semi-truck on a busy Oklahoma interstate.
OKLAHOMA CITY, OK・2 DAYS AGO
KFOR

The lives of two Oklahoma firefighters will be honored by the Oklahoma State Firefighters Association.
OKLAHOMA CITY, OK・2 DAYS AGO

In her 10 months of life, little Eris has undergone a dozen surgeries and exceeded doctors expectations.
OKLAHOMA STATE・1 DAY AGO
KFOR

A metro tenant breathes a sigh of relief, after he says a massive maintenance request fell on deaf ears for months.
OKLAHOMA CITY, OK・2 DAYS AGO
KFOR

A TikTok-famous donut and ice cream restaurant is preparing to set up shop in Oklahoma.
OKLAHOMA CITY, OK・2 DAYS AGO
KFOR

A family-oriented event that celebrates the western history of the famous Chisholm Trail is coming to Yukon.
YUKON, OK・2 DAYS AGO

In Oklahoma, the long-awaited relief from a notably hot summer is finally around the corner. Fall is beginning to swirl in the air as the leaves are beginning to slowly change. As it always does, Autumn will usher in the holiday season before we know it. With the holiday season comes more gatherings, meals, and outings than just about any other time of the year. What better time of year than the holidays to come together with one another? Holiday happenings, while joyful, can also trigger stress and anxiety, especially for those struggling with hearing loss. Many can manage when listening environments are not demanding but can feel overwhelmed and even isolated when there is an excess of background noise and too many voices present. In listening environments such as these, words may jumble together and make conversations particularly difficult to follow, leaving those struggling with hearing loss feeling as if they are in a perpetual game of mental “Wheel of Fortune.” Thankfully, there is hope for situations such as these with the successful treatment of hearing loss.
OKLAHOMA CITY, OK・2 DAYS AGO
KFOR

Chad and Emily Reynolds are happy every day they get to walk around in a home that developer G.A. Nichols built in 1919.
OKLAHOMA CITY, OK・2 DAYS AGO