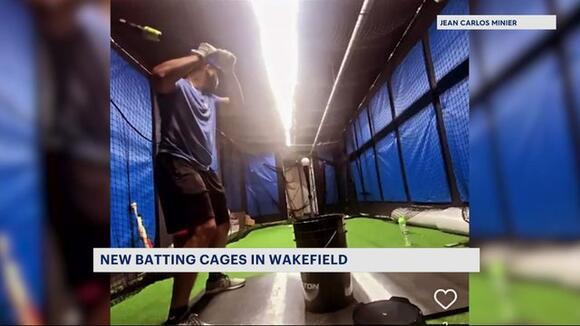 Bronx native Jean Carlos Minier says his love for baseball started at an early age and now he's spreading that passion to the youth in the Bronx community.

Barrel Up Baseball Player Development is a program Minier says he started four years ago. He says he wants to share his knowledge for those looking to take the game seriously.

Minier was nearly signed to a Major League Baseball team when he was just 16, and he says although that didn't work out, his work had to continue somehow.

The tournament, backed by NYCFC and several of the foreign consulates in Manhattan, raised money to go toward the youth soccer programs so they can play and learn the sport for free.
NEW YORK CITY, NY・12 HOURS AGO
News 12

Brady McCarthy is a superhero by bringing awareness to the importance of inclusion with his book and a movie.
CHAPPAQUA, NY・1 DAY AGO
News 12

Foodtown’s ‘Benny The Butcher’ fighting for his life battling cancer

“Benny The Butcher”, whose real name is Benny Caruso, was diagnosed with Glioblastomas the day after his son’s graduation.
BROOKLYN, NY・1 DAY AGO
News 12

Judge was held hitless with two walks as the Pinstripes defeated the Orioles 8-0 at Yankee Stadium.
BRONX, NY・12 HOURS AGO

He was called the "Jersey Jumper." It is fair to say that he was America's first daredevil.
PATERSON, NJ・1 DAY AGO
News 12

'It's just heart-wrenching for everybody.' Community remembers Huntington paramedic killed in Queens

An FDNY paramedic from Huntington was brutally killed in an unprovoked attack in Queens Thursday afternoon, police say.
HUNTINGTON, NY・1 DAY AGO
News 12

Local businesses, mental health and financial organizations teamed up for The Catalyst Experience on Sunday in Brooklyn.
BROOKLYN, NY・11 HOURS AGO
News 12

Graffiti artist and teacher Tony Cruz awarded 10 art scholarships to students with disabilities along with a free graffiti workshop on Saturday.
BRONX, NY・8 HOURS AGO
News 12

Saturday's event has been canceled due to the rain, but all activities will be held on Sunday as scheduled.
BRIDGEPORT, CT・1 DAY AGO
News 12

She was known worldwide as the "First Lady of Song," but Ella Fitzgerald's roots are in Yonkers. On Thursday, she had a school named after her.
YONKERS, NY・2 DAYS AGO

Bake to Delight in Essex County was founded by Aaron Li, along with his mother Jenny and cousin Angela.
ESSEX COUNTY, NJ・19 HOURS AGO
News 12

Bridgeport was awarded a $30,000 grant from the National Fitness Campaign to build a new fitness court in an attempt to inspire health and wellness for residents.
BRIDGEPORT, CT・1 DAY AGO
News 12

Saturday was opening of the David Rockefeller Creative Arts Center at Pocantico, a creative arts hub which was once an Orangery.
WESTCHESTER COUNTY, NY・9 HOURS AGO
News 12

They say the suspect tried to leave the store without paying for any of the items he had with him.
BROOKLYN, NY・19 HOURS AGO