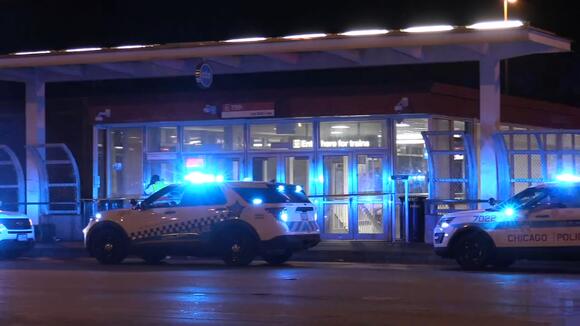 Chicago police have released surveillance video of two suspects in Saturday's deadly shooting on a CTA Red Line train. A 29-year-old man was on the Red Line at 79th Street in the city's Chatham neighborhood at about 2:00 a.m. Saturday when another man fired shots, police said. The medical examiner's office later identified him as Diunte Moon, the father of an 8-year-old girl. Moon was taken to the hospital with gunshot wounds to his chest and abdomen. He was transported to the University of Chicago Medical Center, where he was pronounced dead, police said.

There is no one in custody and Area Two detectives are still searching for the suspects. One suspect was last seen wearing a red hoodie and jeans, police said. The other was last seen in a black jacket and jeans. Police asked anyone with information to call 312-747-8271. CPD Supt. David Brown and CTA President Dorval Carter announced additional CTA security at a press conference Saturday afternoon.

"It is unacceptable and will not be tolerated," Brown said of CTA violence. "No resident should think twice about their safety on any part of the CTA or in our neighborhoods." Brown said the department will deploy more officers to the CTA starting Sunday. He declined to say how many officers will be deployed. Brown said that the department has added additional officers to monitor the transit system over the past year. "It's a significant number," Brown said. "We're also committed to adding even more." SEE ALSO | Chicago police add new CTA train patrols; K-9 units to return Carter said the CTA is planning to bring back K9 security guard teams, adding that the transit authority will release more details about their return within the next week. The K9 units were last used on the transit system in 2019. "This was a senseless act of violence that has no place in the city and especially not in the CTA," Carter said. So far this year, the CTA has added 250 unarmed security guards, but red line users remain ambivalent about their efficacy as violent crime across the board continue to increase. On July 22, a man was stabbed as he fought back during an attempted robbery at North and Clybourn , while on July 25th, a 15-year-old who police say was part of a group attempting to rob someone onboard a red line train near 63rd street , was killed when the would be target pulled out a knife and stabbed him. "They need armed security," said Red Line User Jason Hansbrough. "They need to have armed security on every platform." CTA President Dorval Carter said he hears users frustrations. "I want to assure you that we are doing everything the we can to stem these egregious acts of violence that occur on CTA properties," Carter said.

Gosh no fear of being seen no 😷 mask wearing 😱 I don't care attitude. They should be in custody quick. Thank you killers! 👍🏼

They live by the sword they will definitely die by the sword. May the father's soul rest peacefully and I pray his daughter is held close in the arms of Jesus Christ.

no fear cus they know Kim Fox will have repeat felons back on the street by 10 am the next day.

Police said one of the suspects had a knife. They punched and kicked the victim, stole his bike and then threw the bike on the tracks, where it was hit by an oncoming train.
CHICAGO, IL・3 HOURS AGO
ABC 7 Chicago

The woman who recorded video of the incident said she went searching for help at the train station, but no one was around.
CHICAGO, IL・4 HOURS AGO
ABC 7 Chicago

"When I saw that, I actually put myself in her shoes, and rushed quickly, in case he got her in the vehicle, I wanted to block the van, so he couldn't get away."
CHICAGO, IL・3 HOURS AGO
ABC 7 Chicago

Chicago shooting: Man found shot in head, killed inside vehicle in Back of the Yards, police say

A man was found shot to death inside a vehicle on the South Side, Chicago police said.
CHICAGO, IL・12 HOURS AGO
ABC 7 Chicago

"I contacted the two officers who helped me previously and said, 'you're never gonna believe this, but my car was stolen again.'"
CHICAGO, IL・19 HOURS AGO

The question of how someone could breach security at the Chicago Police Department's Homan Square facility is complicated by the importance of the facility to CPD's citywide operation.
CHICAGO, IL・14 HOURS AGO
ABC 7 Chicago

A man and woman were killed after their car crashed into a building in the Brighton Park neighborhood Sunday night, Chicago police said.
CHICAGO, IL・1 DAY AGO

Two people were seriously injured after a fire in a four-story apartment building in the Brainerd neighborhood Tuesday morning, the Chicago Fire Department said.
CHICAGO, IL・2 HOURS AGO
ABC 7 Chicago

"In my 28 years, I haven't seen a case that has hit as close to home for myself and so many others in this department," then-CPD Supt. Eddie Johnson said at the time.
CHICAGO, IL・20 MINUTES AGO
ABC 7 Chicago

The family of the 3-year-old boy who was allegedly pushed into Lake Michigan Monday said that he passed away Sunday morning.
CHICAGO, IL・22 HOURS AGO
ABC 7 Chicago

Aurora police are investigating a shooting that has left one person dead and another in critical condition.
2 DAYS AGO

The FBI has released surveillance photos of the suspect in a bank robbery inside an Uptown Jewel Osco last week.
CHICAGO, IL・13 HOURS AGO
ABC 7 Chicago

A man was fatally stabbed during an argument on the city's Northwest Side, Chicago police said.
CHICAGO, IL・3 DAYS AGO
ABC 7 Chicago

The Major Accidents unit is investigating after a woman was killed and four others were hurt in a DuSable Lake Shore Drive crash, police said.
SOUTH HOLLAND, IL・2 DAYS AGO
ABC 7 Chicago

Two men from Joliet were killed after what police are calling a targeted shooting at a bar in Grundy County Saturday.
GRUNDY COUNTY, IL・2 DAYS AGO