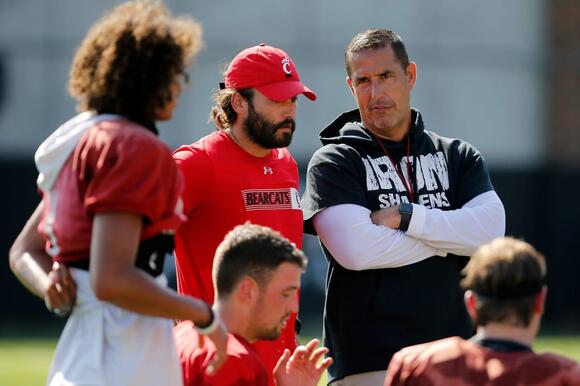 Fickell, Mike Tressel and the QBs discussed the opening days of fall camp.

"There could be a vote," Tressel said about the battle. "I bet it would be split right down the middle amongst the coaching staff. It's sort of impressive right now."

Neither QB has separated from the other about a week into camp as both continue to show signs they can start for a Top-25 team . The two are rooming together, a quirk in this process that's fostering a deeper bond in their friendship.

"We're in bed early, lights off, watching TikTok, showing each other funny videos," Ben Bryant said about the room situation. "It's really chill in there. We have a good time, joke around, and it's not weird at all. We're friends."

On the field, I couldn't tell much of a difference from practice on Saturday. Both QBs have strengths, both made mistakes, and head coach Luke Fickell made it clear on Sunday what one big factor in the choice will be.

"Decision-making is always the thing," Fickell said. "We keep talking about how we are a young team. Well, we got a lot of older guys who have been here a long time, who are great leaders. They just haven't had the experiences on the field. The decision-making at the quarterback position is very important."

Prater echoed that sentiment in his comments on another huge process in his football career.

"It just revs everything up," Prater said about going from a backup to a QB battle. "With Desmond (Ridder), you knew he was the guy, this was his program. The big thing for me is just trying step into that leadership role he had—being vocal, being out there and competing every day."

The coaches will continue ramping up the team drills as camp progresses. Right now, it's clear the defense is still ahead of the offense, especially one that's using a pair of QBs with opposite skill sets.

The painting is blurry, but that focus will sharpen each new day at Higher Ground.

"Let It Fly" Takeaways: Episode One

Patrick Mahomes has a gift. It's hard to make fellow NFL players look foolish. The Kansas City Chiefs quarterback does it routinely. In an anticipated matchup with the Tampa Bay Buccaneers and Tom Brady on Sunday night, Mahomes had two ridiculous plays in the first half. The first came when...
KANSAS CITY, MO・32 MINUTES AGO
All Bearcats

I filled in for Alex Frank on the final show of the week.
CINCINNATI, OH・2 DAYS AGO