Can Jake Guentzel Hit the Century Mark for the Penguins? 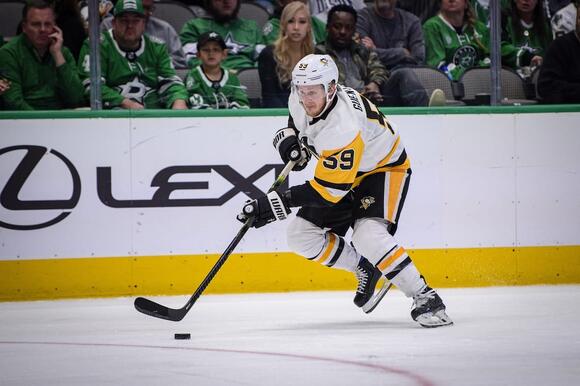 Most of the attention given to the Pittsburgh Penguins falls on the shoulders of their stars, Evgeni Malkin, Kris Letang, and Sidney Crosby. Because of that, Jake Guentzel has been able to fly under the radar as one of the best left wings in the NHL.

Guentzel has been the top left wing on the Penguins since entering the league in 2017 and cemented his status as a premier goal scorer last season. The 27-year-old winger scored 40 goals for the second time in his career and split the team lead in points with Sidney Crosby (84).

When looking at the best left wings in hockey, Jake Guentzel's name usually falls in the second tier, along with players like Kyle Connor, Timo Meier, and Elias Pettersson.

However, his ranking is diminished by many due to Guentzel playing on a line with Sidney Crosby. Guentzel's reliance on Crosby as his center is greatly exaggerated, as he has proven time and time again to be a force in creating offense.

One thing the 27-year-old hasn't accomplished yet is a 100-point season. Heading into the seventh year of his career, Guentzel's next two seasons offer the best chance for him to reach that coveted century mark.

Not only will he be playing with Crosby and one of Rakell or Rust, but his adjustment to being the net front on the power play took positive steps last season and figures to continue to improve. Jake Guentzel is the Penguin's best kept secret, but one big season could change that in 2022-23.

Make sure you bookmark Inside the Penguins for the latest news, exclusive interviews, breakdowns and so much more!

Rickard Rakell is the Key to Unlocking Penguins Power Play

Projections for Each Penguins Defenseman

The Pittsburgh Penguins cut 17 players to reduce their roster size to 28.
PITTSBURGH, PA・16 HOURS AGO
Inside The Penguins

Radim Zohonra has been impressive during Pittsburgh Penguins training camp, but he might still find his way to the AHL.
PITTSBURGH, PA・11 HOURS AGO
Inside The Penguins

The Pittsburgh Penguins reduced the size of their roster to 45 players.
PITTSBURGH, PA・1 DAY AGO