Mt. Orab PD hands out more than 350 freezer pops during ‘Operation Freeze Out’ 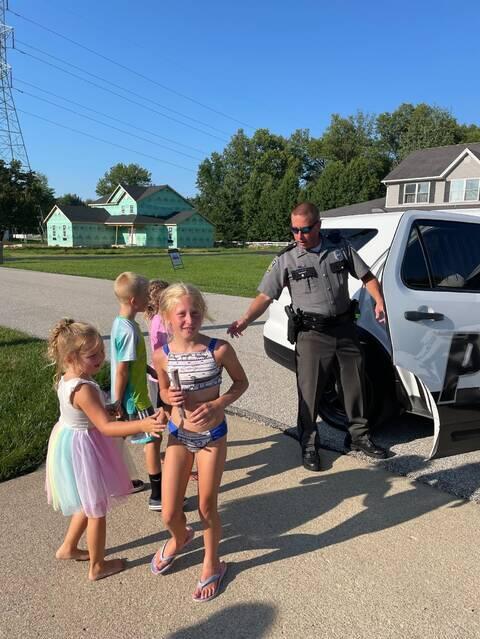 “Operation Freeze Out” was a huge success for the Mt. Orab Police Department for the second year in a row. The event took place on July 21 from 6-8:00 p.m. throughout the streets of Mt. Orab. To get the word around, Operation Freeze Out was announced a couple of days prior on Facebook. Officers divvied themselves up to cover all sections of Mt. Orab, some bringing members of their family to join in on the fun. They were tasked with the compelling mission of handing out flavorful freezer pops to the community.

To attract attention, the officers played the classic ice cream truck music over the PA systems in their vehicles. The tactic was effective; however, it amusingly left kids and adults looking around for an ice cream truck. All were met with a pleasant surprise as the police car slowed to a stop and officers offered popsicles. Not only did the popsicles receive attention from kids, but also adults. Who doesn’t love a cool treat on a hot summer day?

Nearing the end of the operation, the officers reconvened at the Western Brown football field. Peewee Football practice was being held during Operation Freeze Out; the officers did not want the kids to miss out on the frozen treats! There were between 100 and 150 kids at the practice who were delighted by the special surprise. It was the perfect way to cool down from a fun, exhausting practice. The Police Department handed out over 375 Freezer-Pops in Mt. Orab!

To wrap up the pleasant event, the officers shared stories with one another while dumping out the ice in the coolers. Seeing the joyous, thrilled smiles of the kids and other community members was the most heartwarming of the experience. Nothing compares to the pleasure of bringing another happiness. Operation Freeze Out gave police officers a chance to connect with the community in an entirely different way. Even the simplest of things can have a widespread, uplifting impact on those around.

George Edward Sharp, 43, of Mt. Orab, was sentenced to an indefinite term of a minimum of six years and a maximum of nine years in the Ohio De
MOUNT ORAB, OH・6 DAYS AGO
Brown County Press