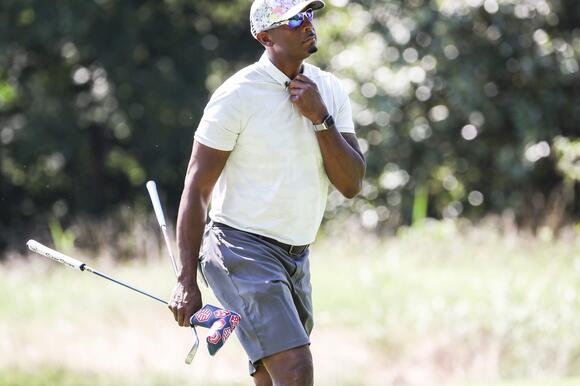 The annual Danny Thomas Celebrity-Am tournament is bringing in a stacked list of national and local celebrities for Thursday's event at Spring Creek Ranch Golf Course in Collierville.

The event will start at 9 a.m. St. Jude 's patients will serve as pin caddies.

PGA TOUR: What to know about the FedEx-St. Jude Championship PGA Tour tournament in Memphis

James Wiseman knows Penny Hardaway. The Golden State Warriors center played for the Memphis basketball coach for one season at East High School. Then, Hardaway successfully recruited Wiseman − the consensus No. 1 prospect in the country in 2019 − as the centerpiece of his first top-ranked signing class. Even though Wiseman...
MEMPHIS, TN・2 DAYS AGO
Page Six

Dallas Cowboys quarterback Dak Prescott and Natalie Buffett have broken up after two years of dating, Page Six can exclusively reveal. Multiple sources confirm the longtime couple actually split around March 2022 but have kept it close to the vest. We’re also told Prescott has been casually dating. Reps for the former couple didn’t immediately return Page Six’s request for comment. The athlete, 29, and Buffett, 25, began dating sometime in 2020 based on social media photos, though it’s unclear exactly when they became official. She posted their first picture together in honor of his 27th birthday, captioning the outdoorsy shot at the...
2 DAYS AGO
WFAN Sports Radio

BT rips Hall of Fame after Scott Rolen's induction: 'It's a joke'

Brandon Tierney can’t believe Scott Rolen is in the Baseball Hall of Fame, while the likes of Pete Rose, Don Mattingly, and Thurman Munson are not.
1 DAY AGO
Athlon Sports

The NFL world today is fixated on Tom Brady and Aaron Rodgers.  Questions continue to follow the future Hall-of-Famers regarding their future. Is retirement on the table? What about a change of scenery? In the case of Brady, a report emerged Tuesday indicating Brady may play in 2023... just ...
TAMPA, FL・2 DAYS AGO
Deadline

EXCLUSIVE: Colin Kaepernick has signed with CAA for representation. The former NFL star holds the all-time NFL record for most rushing yards in a game by a quarterback. In 2016, he took a knee during “The Star Spangled Banner” to bring attention to systemic oppressions against Black and Brown people, and since then, has founded and helped to fund three organizations: Know Your Rights Camp, Ra Vision Media, and Kaepernick Publishing, which advance the liberation of Black and Brown people through storytelling, systems change, and political education. Related Story Anna Faris Signs With CAA Related Story Marilyn Manson Settles 'Game Of Thrones' Actress Esmé Bianco's...
23 HOURS AGO
KBOS B95

SAN FRANCISCO — Ziaire Williams sat in the corner of the locker room, with a white towel draped over his head as he looked down at the floor after having one of the worst performances of his young NBA career. "Aye Z, we kicking it tonight, bruh," Desmond Bane yelled across the room to Williams, who was shaking his head with the towel still covering his face. "Pick your head up." ...
MEMPHIS, TN・1 DAY AGO
The Commercial Appeal

SAN FRANCISCO, Calif. — It's safe to say that there is a healthy level of mutual respect between the Memphis Grizzlies and Golden State Warriors. When Steve Kerr was asked in December 2021 about the Grizzlies being a rival of the Warriors, he denied the notion and mentioned that a playoff series and more things would need to happen. A little more than a year later — after a playoff series and Christmas Day meeting —...
MEMPHIS, TN・2 DAYS AGO
The Commercial Appeal

Stephen Curry didn't see the end of the Golden State Warriors' 122-120 win over the Memphis Grizzlies Wednesday, as the All-Star guard was ejected with 1:14 left in the fourth quarter at Chase Center. Curry threw his mouthpiece after being upset with teammate Jordan Poole for not passing him the ball and rushing a 3-point shot after an offensive rebound. The mouthpiece went into the crowd and the referee nearby quickly issued a technical foul and tossed...
MEMPHIS, TN・1 DAY AGO
The Commercial Appeal

'He was tired of hearing it': Penny Hardaway gets first tech as Memphis basketball coach

Penny Hardaway strolled into the postgame news conference after Thursday's 99-84 win over SMU having just officially notched career victory No. 100. The fifth-year Memphis basketball coach proudly wore a baseball cap, given to him by his players, with "100" embroidered on it. But before Hardaway ever even sat down behind the microphone, he made a proud declaration to the assembled media related to something else entirely. ...
MEMPHIS, TN・15 HOURS AGO
AZCentral | The Arizona Republic

Jason Derulo and the Black Keys will headline the NFL TikTok Tailgate before Super Bowl 2023 on Sunday, Feb. 12. For the third year, the NFL has partnered with the TikTok social media platform to present the pregame celebration. This year it will be live from State Farm Stadium in Glendale, Arizona.
GLENDALE, AZ・13 MINUTES AGO
The Commercial Appeal

They were already melting down, but there was one possession in particular that encapsulated everything that isn’t going right for these Memphis Grizzlies. They still led the Golden State Warriors with less than three minutes to go Wednesday night and Ja Morant had the ball with Klay Thompson guarding him. It was closing time in San Francisco again. Time to see what these young Grizzlies had learned since their playoff run last season ended with too...
MEMPHIS, TN・1 DAY AGO
The Commercial Appeal

Add another highlight for Ja Morant as the Memphis Grizzlies guard showed off his athleticism on another acrobatic finish Wednesday. With time winding down in the first half against the Golden State Warriors, Morant drove to the basket and windmilled the ball around Warriors' Kevon Looney for a scooping, up-and-under layup. It gave the Grizzlies a 54-53 lead heading into halftime at Chase Center in San Francisco.
MEMPHIS, TN・1 DAY AGO
The Commercial Appeal

The Memphis Grizzlies' road trip hasn't been pleasant. Now it gets worse with center Steven Adams out for an extended period of time. The Grizzlies announced Tuesday that Adams is expected to miss 3-5 weeks due to a PCL sprain in his right knee. The injury was suffered on the last play of Sunday's 112-110 loss to the Phoenix Suns. ...
MEMPHIS, TN・2 DAYS AGO