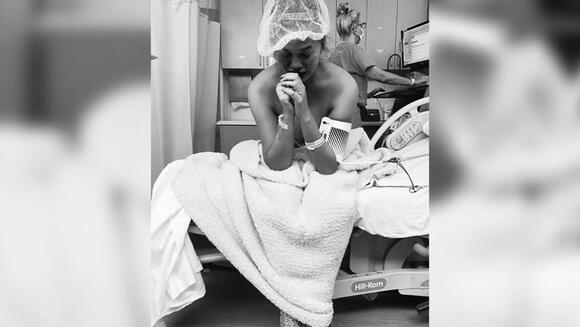 Chrissy Teigen is hitting back at social media trolls criticising her appearance, just days after the model announced she is pregnant.

Teigen, 36, shared a smiling picture of herself with her son Miles to Instagram on 7 August. In the sweet image, the pair are seen enjoying a boat ride as the cookbook author cuddles her four-year-old son. She captioned the post: “Keeping up with this one somehow”.

However, what social media users seemed to comment on more was Teigen’s appearance in the recent snap. But in true Chrissy Teigen fashion, she called out the critics who claimed she is always “changing” her looks.

“Don’t even recognise her,” wrote one critic. Teigen, who pinned the troll’s comment to the top of her post, replied: “I have had these teeth for like 10 years”.

Another social media troll commented: “You’re beautiful, why do you keep changing your face? I didn’t recognise you in this pic.”

Some fans came to Teigen’s defense, with one user writing, “She literally looks the same. Wtf is wrong with everyone’s eyes in these comments. She just has her makeup done, obviously.”

Teigen responded that the only thing she had done differently with her appearance is doing her own makeup that day. “What’s funny is I usually do full glam or nothing at all and this time I took 10 mins to do it myself and I never am again lol,” she wrote.

The model basically summed up her thoughts on all the criticism when she commented, “u guys are somethin.”

Teigen announced on 3 August that she is expecting another child with husband John Legend, two years after she suffered the loss of her son, Jack, at 20 weeks pregnant. To celebrate the special occasion, Teigen posted a selfie of her growing baby bump to Instagram.

“The last few years have been a blur of emotions to say the least, but joy has filled our home and hearts again,” she captioned the post. “One billion shots later (in the leg lately, as you can see!) we have another on the way. Every appointment I’ve said to myself, ‘Ok if it’s healthy today I’ll announce’ but then I breathe a sigh of relief to hear a heartbeat and decide I’m just too nervous still.”

“I don’t think I’ll ever walk out of an appointment with more excitement than nerves but so far, everything is perfect and beautiful and I’m feeling hopeful and amazing. Ok phew it’s been very hard keeping this in for so long!”

Following the announcement, Grammy-winner Legend shared his own sweet reaction to the pregnancy news on social media. The 43-year-old singer posted a screenshot of Teigen’s baby bump selfie to his Instagram page, with the short but sweet caption of three red heart emojis.

The couple, who were married in 2013, are also parents to their six-year-old daughter, Luna.

Chrissy Teigen’s maternity style is super stylish and the mother-of-two proved that when she headed to the movies with her family in LA on Oct. 2. The 36-year-old put her baby bump on display when she wore a tiny black bralette with a pair of super high-waisted black leggings and a button-down shirt.
CELEBRITIES・16 MINUTES AGO
Reality Tea

I’m sure we have all heard the adage “when you point the finger at someone, three fingers are pointing back at you.” But has Lisa Rinna? The Real Housewives of Beverly Hills villain is back at it on social media, this time coming for castmate Crystal Kung Minkoff. Remember when Rinna told us she wouldn’t […] The post Lisa Rinna Calls Out Crystal Kung Minkoff For Allegedly Omitting Details About Kathy Hilton Drama In Aspen appeared first on Reality Tea.
BEVERLY HILLS, CA・16 MINUTES AGO
The Independent

Jameela Jamil has condemned the decision to honour Karl Lagerfeld with the theme for the 2023 Met Gala.Last week, Vogue announced that the theme for the annual event would be: “Karl Lagerfeld: A Line of Beauty,” with the outlet noting that the accompanying exhibit would “examine the life - and creative legacy - of the late designer, who shaped the face of fashion for more than half a century”.However, The Good Place star, 36, publicly criticised Vogue’s choice in a post shared to Instagram on Saturday, where she shared a black-and-white portrait of the late designer and wrote: “Nope”.Jamil...
DESIGNERS & COLLECTIONS・1 HOUR AGO
The Independent

Barack Obama and wife Michelle Obama have shared sweet tributes to each other on social media in honour of their 30th wedding anniversary.The 44th president of the United States celebrated his anniversary on Monday by posting a photo with his wife on the beach and another of her on their wedding day. His Instagram post also included an image of the phrase “Barack + Michelle,” with a heart around it, written in the sand.In the caption, Barack praised Michelle and playfully addressed how gracefully she’s aged, in comparison to him.“Miche, After 30 years, I’m not sure why you look...
LOTTERY・52 MINUTES AGO

Man, I Honestly Feel Sorry For Each And Every One Of These People Who Had The Worst Month Ever

My friends, this right here is the very definition of some rough stuff.
ENTERTAINMENT・3 MINUTES AGO
HollywoodLife

Dream, the famous Minecraft YouTuber with over 30 million subscribers, decided to show his real face to the world on October 2. Dream previously used a white smiley face figure to cover his face, until his big reveal in the video that’s gotten over 19 million views. Dream sat backwards in a chair and then covered his face with a blanket before he showed his identity to the world. “Hi. Feels so awkward. My name is Clay. Otherwise known as Dream online,” the 23-year-old brunette said to the camera.
BEHIND VIRAL VIDEOS・15 MINUTES AGO
HuffPost

The 25-year-old walked onto the runway while topless as three people sprayed her with a weblike substance.
BEAUTY & FASHION・31 MINUTES AGO