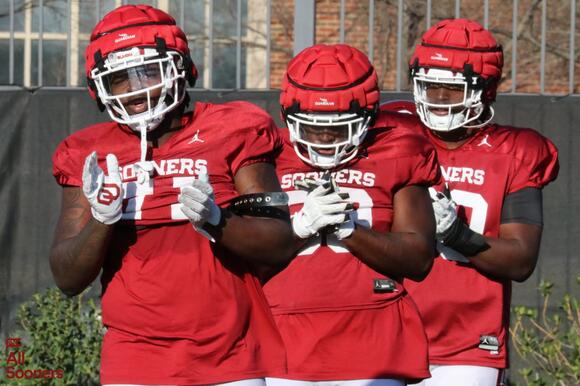 A dip was expected in OU's first year under first-time head coach Brent Venables, but the Sooners haven't been ranked this low to start a season since before Lincoln Riley.

After six consecutive years of starting the college football season at No. 8 or higher, Oklahoma took a dip in this year’s USA Today AFCA Coaches Poll.

The Sooners come in at No. 9 in this year’s preseason poll, their lowest ranking to start a season since 2015, when Bob Stoops hired Lincoln Riley as offensive coordinator and OU opened at No. 19.

This year’s change at the top from Riley to Brent Venables — coupled with the fact that no offensive or defensive players were picked to the preseason All-Big 12 team — is an indicator of what other coaches think about the Sooners this year. OU returns just four full-time starters on defense and seven starters or former starters on offense.

The Associated Press preseason Top 25 will be released Aug. 15.

The Sooner quarterback was knocked out of the game after he absorbed a targeting penalty from TCU linebacker Jamoi Hodge.
FORT WORTH, TX・16 HOURS AGO
AllSooners

No Answers for Oklahoma, Brent Venables as TCU Blows Out the Sooners

Injuries, including a bad one to Dillon Gabriel, missed tackles and defensive busts pile up as the Horned Frogs hand the Sooners their worst conference defeat in eight years.
FORT WORTH, TX・14 HOURS AGO
AllSooners

Oklahoma-TCU GameDay: Under the Radar

The Sooners' QB has been good, but said this week he's "desperate" to be better and to continue leading and pushing his teammates to improve against TCU and beyond.
NORMAN, OK・2 DAYS AGO
AllSooners

Watch Oklahoma guard Grant Sherfield meet with the media on Thursday, Sept. 29 as the Sooners prepare for the start of the 2022-23 season.
NORMAN, OK・2 DAYS AGO
AllSooners

How does Brent Venables' team respond to his first career defeat? Sooner Nation will find out Saturday in Fort Worth.
NORMAN, OK・1 DAY AGO
AllSooners

How Close is Oklahoma to Playing Physical Football? 'Not Very,' Brent Venables Says

TCU took the fight to the Sooners on Saturday, and the OU coach admits he can't be any less or more disappointed than he is.
FORT WORTH, TX・11 HOURS AGO

TCU Horned Frogs: By the Numbers

The No. 18-ranked Oklahoma Sooners head to Ft. Worth looking to bounce back after suffering a setback in the conference opener.
NORMAN, OK・1 DAY AGO
AllSooners

On Oklahoma's 55-24 loss to the TCU Horned Frogs on Saturday afternoon in Fort Worth, TX.
FORT WORTH, TX・6 HOURS AGO