Rickard Rakell is the Key to Unlocking Penguins Power Play 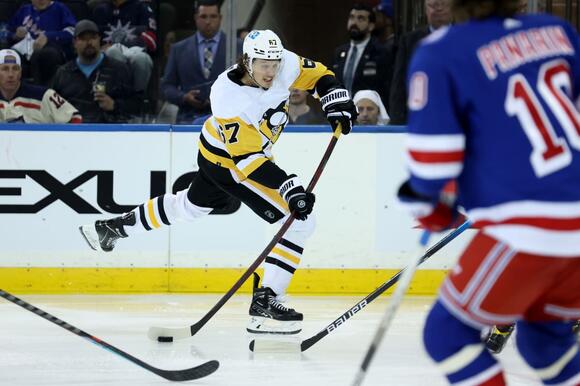 The Pittsburgh Penguins solution to improving their power play could be Rickard Rakell.

In the Sidney Crosby and Evgeni Malkin era, the Pittsburgh Penguins have been known for a lot of things: winning championships, scoring titles, MVP awards, and the list goes on. However, their power play has failed to be a strength.

Despite having three Hall of Famers, their special teams have struggled since the departure of Phil Kessel. The Penguins are hopeful they can turn it around this season, and the key to doing so may be newcomer Rickard Rakell.

For the past two seasons, the Penguins have deployed a first power play unit of Sidney Crosby, Evgeni Malkin, Jake Guentzel, Bryan Rust, and Kris Letang. On paper, they are one of the most formidable groups assembled. They were ranked 19th in the league, converting just above a 20 percent rate. The top power plays in the NHL, Toronto and St. Louis, converted at a 27 and 27.3 percent rate. Simply put, the Penguin's power play has underachieved.

When the Penguins struggle, Coach Mike Sullivan is unafraid to change it up. He broke up his first line to jumpstart Evgeni Malkin upon his return to the lineup. He's tinkered with the bottom six line combinations and defensive pairings. But when it comes to the power play, Sullivan's unwavering belief in the same five players may be costing them.

Enter Rickard Rakell. Since he arrived in Pittsburgh, his brief stint has been exciting and productive. He scored 13 points in 19 regular season games, showing an ability to play with either of the Penguins' elite centers. With two 30-goal seasons on his resume, his scoring touch is well known and respected around the league. And while his shot could be a helpful asset for this unit, his other qualities are what make Rakell best suited to help this power play.

One of Rakell's best qualities on the ice is his playmaking ability. He has a knack for getting into the soft areas of the ice and making smart plays. Take a look at one of Rakell's goal from back in April of this past sea son.

The defender respects Rakell's shooting ability, sliding to take away a low shot. Rakell smartly fakes the shot attempt and cuts to the crease, where he tucks in the puck behind the Detroit Red Wings goaltender. This kind of heads up, good decision-making happens every moment he is on the ice.

These qualities also happen to be areas the Penguins struggle mightily with the man advantage. The Penguins have a bad habit of forcing an extra pass and not having enough motion during their power play. With the addition of Rakell, they would have a player who makes crisp passes and constantly moves in the offensive zone.

Rickard Rakell also brings another aspect to the Pittsburgh Penguins power play: a fresh look. Having played his career in Anaheim, Rakell brings a determination and drive that only playing for a losing team can invoke. The Penguin's power play has lost that hunger on their special teams and needs it back desperately. Inserting Rakell can help restore that dogged pursuit. And while that also means removing another talented player, inserting Rakell could prove too great of an opportunity to pass up.

The Penguins need their power play to improve drastically next season. With the age of their roster, the Penguins need to pounce on the opportunities they are given. It will help them greatly on perhaps their final quest to chase Lord Stanley's Cup.

Make sure you bookmark Inside the Penguins for the latest news, exclusive interviews, breakdowns and so much more!

Projections for Each Penguins Defenseman

Penguins Preseason Primer: What and Who to Watch For

The 2022-23 Pittsburgh Penguins season is in view with the preseason about to kick off.
PITTSBURGH, PA・1 DAY AGO
Inside The Penguins

The NHL is closing in on a new season and the Pittsburgh Penguins have kicked off their training camp and Preseason.
PITTSBURGH, PA・7 HOURS AGO
Inside The Penguins

Penguins in No Rush to Extend Tristan Jarry

Pittsburgh Penguins and Tristan Jarry are taking their time to work out a contract extension.
PITTSBURGH, PA・1 DAY AGO
Inside The Penguins

The Pittsburgh Penguins have trimmed their training camp roster.
PITTSBURGH, PA・5 HOURS AGO

Penguins Have Room for Improvement After Preseason Openers vs. Blue Jackets

Both the Pittsburgh Penguins and Columbus Blue Jackets take a win as the NHL preseason kicks off.
PITTSBURGH, PA・8 HOURS AGO
Inside The Penguins

Penguins Forward Options as They Look for Change

Mike Sullivan has opened up opportunities for changes with the Pittsburgh Penguins forward core.
PITTSBURGH, PA・1 DAY AGO