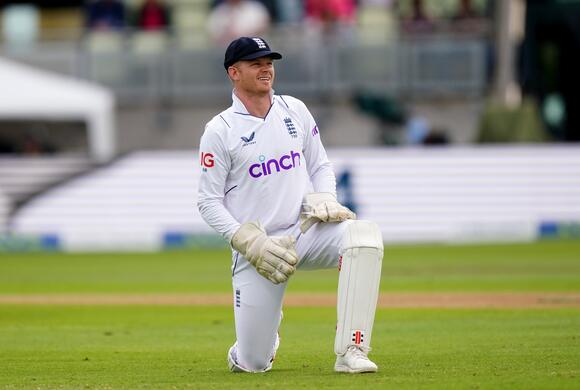 Sam Billings believes captaining the England Lions against South Africa offers his best chance of earning a recall to the Test squad.

The England Lions squad, who have all left their respective Hundred and Royal London one-day cup squads, gathered in Canterbury ahead of the start of a four-day game against South Africa on Tuesday.

Harry Brook and Will Jacks were among the 13-man squad, which will be captained by Billings, to face the tourists, who got the better of England in both the Twenty20 and the one-day international series earlier in the summer.

Paul Collingwood will take charge of the side for the match, which takes place ahead of the first Test at Lord’s starting on 17 August.

Billings believes the immediate shift to red-ball cricket, after the Kent wicketkeeper captained the Oval Invincibles during their victory over Welsh Fire on Sunday, is a challenge, but one the players are used to.

“It is a challenge. But it is what it is really,” the 31-year-old told the PA news agency. “As players we want to give ourselves the best chance of playing for England, it’s as simple as that.

“Whatever the schedule is, it is what it is but, for me, I want to press my claims to try and get back in that Test squad.

“I had a taste of it and this seemed like the best option for me and my cricket moving forward, so it was a pretty easy decision.

“It is challenging but, like I said, it is something that you’ve just kind of got to find a way to manoeuvre around and adapt to.”

Billings believes a number of players have points to prove, with Ollie Robinson , Keaton Jennings and Craig Overton among those hoping to earn an England recall.

“It’s an opportunity, of course, for individuals to pursue their ambitions,” he said.

“It definitely is the best way in a schedule where there’s not much red-ball cricket around the Test series, so it is the perfect opportunity to do so.

“So a lot of people this week have got points to prove and opportunities to kind of take.”

When asked about Robinson, who has not featured for the national side since January and has had to contend with a back injury, but was named in England’s 14-man squad for the Test, Billings believes he is fully fit.

“He seems as he always is. He bowled brilliantly obviously in that Championship game a couple of weeks ago, and we know the class he has and the skill level he possesses,” he said.

“So, if he’s fit and firing, he is a huge asset to any team, and he also provides that edge. So, it’s nice to get the ball in the back spaces and, again, he’s played a lot of cricket now.

“So, as a senior bowler in this side, there’s definitely someone I can lean on to ultimately get the best out of.”

South Africa could be without Kagiso Rabada for the tour match, with Dean Elgar unwilling to state whether the fast bowler would be fit for the first Test after he missed the final T20 against England through injury.

“Obviously that is one of our top priorities that we have at the moment. Look, he has bowled since we’ve started our camp in Canterbury,” Elgar said.

“Obviously going through the workload I think that’s maybe the biggest concern; whether he can carry himself throughout a Test match with the intensity and volume of overs in a day’s play.

“For now he’s doing all the right things, I can’t say yes or no as yet because there are eight, nine days out before we play the first Test but it is high on our list to get him fit.”

Peter Hatzoglou and quick Matt Kelly will come into the frame for next weekend's decider which could attract 50,000 fans
50 MINUTES AGO
The Independent

Fulham were given an FA Cup scare by Sunderland of the Championship as the Wearsiders played out an impressive 1-1 draw against the Premier League side at Craven Cottage.Winger Jack Clarke looked to have teed up the shock of the fourth round when he netted after just six minutes for the visitors, who were the better side for much of the game in west London as Marco Silva’s team struggled.Tom Cairney scored in the 61st minute to level for Fulham, before a stoppage-time goal from 15-year-old Sunderland substitute Chris Rigg was ruled out for offside to spare the hosts’ blushes.Leeds...
13 HOURS AGO
The Independent

Brighton vs Liverpool live stream: How to watch FA Cup fixture online and on TV today

Liverpool travel to Brighton in the FA Cup fourth round, hoping to avoid a repeat of their shambolic 3-0 Premier League defeat to the Seagulls earlier this month.The FA Cup holders required a replay to defeat Wolves in the previous round, with the 1-0 win at Molineux the only win Jurgen Klopp’s side have managed this calendar year.Brighton are above Liverpool in the Premier League table and Roberto De Zerbi’s side will be motivated to go on a cup run following their defeat to Charlton in the League Cup fifth round.Liverpool defeated Chelsea to win the FA Cup last...
59 MINUTES AGO
The Independent

Liverpool manager Jurgen Klopp insists he has not become a bad coach overnight but will not think about his legacy at the club until he has retired.Inconsistent results this season have left his side ninth in the Premier League table, 10 points adrift of fourth-placed Manchester United with a match in hand, having already relinquished their hold on the Carabao Cup.But last season they were two games away from winning an unprecedented quadruple and Klopp is keen to put things in perspective.“I knew it would be difficult, absolutely. Last year was super-intense, much longer than we could have expected because...
8 HOURS AGO
The Independent

Roberto De Zerbi challenged Solly March to build on his scintillating recent form and establish himself as an attack-minded, goalscoring winger.The 28-year-old has netted three times in Brighton’s last three Premier League games, including a brace in the 3-0 win against Liverpool earlier in January to take his tally for the season to a career-best four goals.March has been one of the Premier League’s most improved players since De Zerbi took charge in September.The Italian has used him in a more attacking role than was typical under his predecessor Graham Potter, and ahead of Sunday’s rematch with the Reds in...
8 HOURS AGO
The Independent

Tottenham Hotspur’s Son Heung-min returned to form with two goals in his side’s 3-0 defeat of second-tier Preston North End in the FA Cup fourth round and Casemiro also grabbed a brace in Manchester United’s 3-1 win over Reading on Saturday.Fellow Premier League sides Leicester City, Leeds United and Southampton also reached round five on a shock-less day.Top flight Fulham were held to a 1-1 home draw by second-tier Sunderland at Craven Cottage.South Korean Son has endured a lean season but made the difference with two superb goals after the break as the visitors moved comfortably through to the...
8 HOURS AGO