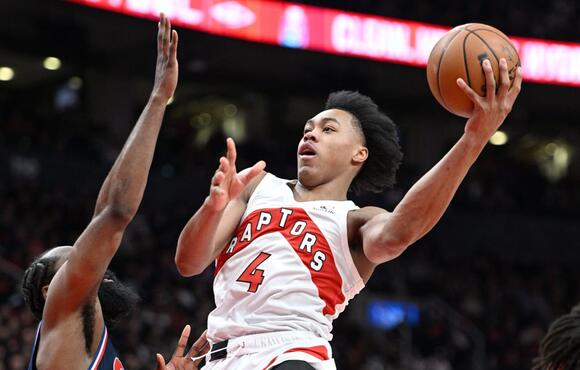 The former ‘Nole is receiving a lot of praise from two greats.

Since its creation in 1993, the Toronto Raptors have produced three NBA Rookie of the Year winners, with the latest being forward Scottie Barnes.

In his lone season at Florida State, Barnes' energy seemed contiguous and helped spark the Seminoles in several games. Lowry said he noticed that trait in Barnes immediately.

Lowry's path didn't cross with Barnes in Toronto, but his experience with the organization and its members have him confident in Barnes' future.

"[Barnes] has great vets, Fred [VanVleet], Pascal [Siakam], he has great management in Masai [Ujiri]," Lowry said. "He has great backing, you know he has a great fan base. The kid is gonna be special."

Carter helped present the Rookie of The Year award to Barnes back in April and also had positive remarks about the Raptors and Barnes.

"They have this shining young star in Scottie Barnes," Carter said. "You watched earlier, it's like, "Hmm, man this kid got a chance.' Then, all of the sudden at the end of the year, I felt like it was understood. I mean, yeah, it was some competition but it was understood that this guy's gonna be the real deal, he's gonna be the next."

Barnes helped lead Toronto to a 48-34 record and earn the No. 5 seed in the Eastern Conference. He averaged 15.3 points, 7.5 rebounds, 3.5 assists and over one steal per game.

The former Seminole also managed 13 double-doubles in 74 games per StatMuse .

Barnes and the Raptors return to action Oct. 2 against the Utah Jazz as part of the NBA Canada Series presented by Bell.

The full episode of Lowry on The VC Show can be found on the NBA on ESPN Youtube page .

What's next for the Florida State Seminoles? Join thousands for FREE to not miss out on any breaking news or recruiting latest by clicking this link or texting our number (850) 616-8661!

The Celtics employee with whom Ime Udoka had an affair helped make all his travel arrangements ... and that job sometimes included organizing travel for his fiancee, Nia Long. Sources connected to the couple and the NBA franchise tell TMZ ... one of the staffer's duties included planning Udoka's team-related travel, and we're told she was also involved in booking travel for Nia to come to Boston or to road games.
BOSTON, MA・1 DAY AGO
Sports Illustrated

The Celtics are the NBA championship favorites at SI Sportsbook, slightly ahead of last year’s champion Warriors.
NBA・16 MINUTES AGO
FastBreak on FanNation

On Monday, Mike Singer of the Denver Post reports that the Denver Nuggets have signed Grant Golden.
DENVER, CO・23 MINUTES AGO
Sports Illustrated

The Seminoles are putting the country and recruits on notice.
TALLAHASSEE, FL・1 DAY AGO
NoleGameday

The Seminoles are closely monitoring the storm.
WINSTON-SALEM, NC・12 MINUTES AGO
NoleGameday

Check out what the Seminoles will be wearing against the Eagles.
TALLAHASSEE, FL・1 DAY AGO

A decision has been made at quarterback.
TALLAHASSEE, FL・2 DAYS AGO
NoleGameday

Benson earned the honor after running through the Eagles all night.
TALLAHASSEE, FL・1 DAY AGO
NoleGameday

FSU returns a kickoff for first time since the 2014 National Championship.
TALLAHASSEE, FL・1 DAY AGO
NoleGameday

Florida State vs. Boston College: Snap Counts and Final Stats for the Seminoles

Who played, and how often, for the Seminoles against the Eagles?
TALLAHASSEE, FL・13 HOURS AGO

The Seminoles make an appearance in the top-25 following a 4-0 start.
TALLAHASSEE, FL・1 DAY AGO
NoleGameday

The Seminoles finish the month of September undefeated after running over the Eagles.
TALLAHASSEE, FL・1 DAY AGO
NoleGameday

A dive into the Florida State commitment's skillset.
TALLAHASSEE, FL・1 DAY AGO
NoleGameday

The Seminoles are slightly favored over the Demon Deacons.
TALLAHASSEE, FL・23 HOURS AGO

Two possibilities for kickoff time and television for the Seminoles and Wolfpack next week.
TALLAHASSEE, FL・2 HOURS AGO