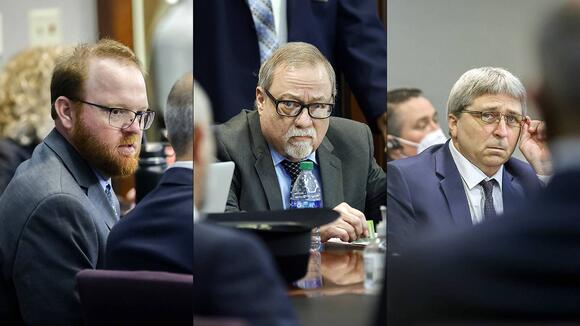 A judge on Monday sentenced the first two of three men convicted of federal hate crime charges connected to the February 2020 murder of Ahmaud Arbery.

Jurors in February found father and son Greg and Travis McMichael and their neighbor, William “Roddie” Bryan, guilty of charges including interference with rights and attempted kidnapping due to Arbery’s race. Arbery, 25, was Black. The McMichaels and Bryan are white.

Their convictions came months after they were convicted on murder charges in state court.

Update 3:02 p.m. EDT Aug. 8: A sentencing hearing for William “Roddie” Bryan has begun at a federal courthouse in Georgia.

Bryan’s attorney, J. Pete Theodocion, asked in a sentencing memo that his client get a sentence loser than life in prison, arguing that Bryan should get a sentence lower than those handed down to the McMichaels.

“The evidence showed Bryan acting out of ignorance not hatred, and without the near expectation of potential violence as the McMichaels,” he said. “When the McMichaels pulled off in their truck armed with firearms, they signed up for a possible shootout. Roddie Bryan did no such thing and acted with no such disregard for life.”

Wood denied a request from Greg McMichael’s attorney to keep him in federal custody until at least the conclusion of a federal investigation into conditions at Georgia state prisons. Earlier, she had denied a similar request from Travis McMichael’s attorney, saying that she did not have the authority to make him serve his federal sentence before serving out his state sentence.

Under longstanding principle, the first jurisdiction that convicts a person has primary jurisdiction over them. Prosecutors argued that Wood does not have the ability to override the principle and that such a move would amount to special treatment for Greg McMichael.

Arbery’s family members on Monday asked Wood to sentence Greg McMichael to the maximum allowed under the law.

Speaking before his sentencing, Greg McMichael apologized to his son, Travis McMichael, and his wife, and told Ahmaud’s family that he “never wanted any of this to happen.”

“There was no malice in my heart or in my son’s heart that day,” he said. “I pray that God’s peace will come to the Arbery family and this entire community.”

Greg McMichael’s attorney, A.J. Balbo, emphasized that his client is a 66-year-old man with health issues who served in the military and in law enforcement and asked for leniency.

“Any sentence this court metes out today will likely be a life sentence for Mr. McMichael,” he said.

In a sentencing memorandum filed in court, Greg McMichael’s attorneys asked Wood to sentence their client to a maximum of 20 years in prison and to allow him to stay in federal custody amid an ongoing federal probe of conditions in Georgia prisons.

Earlier, Wood sentenced Travis McMichael to life in prison plus 10 years after he was found guilty of federal hate crimes in the February 2020 murder of Arbery. She denied a request from Travis McMichael’s attorney that aimed to keep the younger McMichael in federal custody due to threats made against his life in state prison.

The judge denied a request from Travis McMichael’s attorney to allow her client to serve his time in federal, rather than state prison.

“The court has neither the authority nor the inclination to override the rules that apply,” Wood said. “It’s not the court’s role to override how that will play out.”

Travis McMichael has 14 days to appeal his sentence.

Arbery’s family earlier asked Wood to sentence Travis McMichael to the maximum and to order him to first serve the sentence handed down to him in state prison.

“My son was shot not one time, not two times, but three times, and your honor I feel every shot that was fired every day,” Arbery’s mother, Wanda Cooper-Jones, said in court as she urged Wood to sentence Travis McMichael to the maximum sentence possible. “When I read in the newspaper that Travis said that he fears for his life – how did he think Ahmaud, how does he think that my son felt when he was first approached when he was being chased that sunny, sunny afternoon?”

Travis McMichael’s attorney, Amy Lee Copeland, asked that her client be kept in federal custody, citing hundreds of threats made against him. She acknowledged the irony of a man convicted of carrying out a vigilante attack fearing vigilante justice himself, but emphasized that, under the law, Travis McMichael should not face what amounts to a “back-door death penalty.”

Prosecutors argued that the court could not override the state court’s sentence to allow Travis McMichael to serve his time in federal rather than state custody, pointing to a longstanding principle that the first jurisdiction that arrests, tries, convicts and sentences a person has primary jurisdiction over a defendant.

Original report: Travis McMichael will be the first to learn his sentence at a hearing scheduled to begin at 10 a.m.

In court records filed last week, an attorney for the younger McMichael asked that her client be kept in federal custody to serve his sentence rather than being transferred to the Georgia Department of Corrections, as would be typical because he was first convicted and sentenced on charges in state court. Attorney Amy Lee Copeland pointed to threats made against Travis McMichael, the fact that DOC officials have determined the threats to be unverified and an ongoing federal investigation into conditions in Georgia prisons.

“McMichael has received threats. Hundreds of threats. He quit counting in January 2022, at around 800 threats,” Copeland wrote in a sentencing memorandum. “The threats have included statements that his image has been circulated through the state prison system on contraband cell phones, that people are ‘waiting for him,’ that he should not go into the yard, and that correctional officers have promised a willingness (whether for pay or for free) to keep certain doors unlocked and backs turned to allow inmates to harm him.”

She said her client is concerned that “he will promptly be killed upon delivery to the state prison system for service of that sentence.”

In January, the McMichaels indicated that they planned to plead guilty to federal hate crime charges after reaching an agreement with prosecutors that would have seen them serve the first 30 years of their sentences in federal prison, WSB-TV reported. However, Judge Lisa Wood rejected the deal after Arbery’s family members spoke out against the agreement in court, and the McMichaels subsequently withdrew their guilty pleas.

Authorities brought charges against the defendants months after Arbery’s death amid public outcry sparked by graphic footage of the shooting that later appeared online. In September, a grand jury indicted former Glynn County District Attorney Jackie Johnson on charges related to the handling of the case.

In one photo, Johnny Lauder’s 86-year-old mother is in her Florida home, submerged nearly to her shoulders in black murky water, staring straight at the camera, mouth open. In another, she lies just above the waterline on a table, wrapped in sheets to keep warm. In yet another, she's being pushed through the water in a wheelchair, her rescue nearly complete.
FLORIDA STATE・15 HOURS AGO