The Canby Herald is the community’s best source for local news, local readers count on. Every day it deliver stories about local people, events and what’s happening at city hall and in local schools.​ 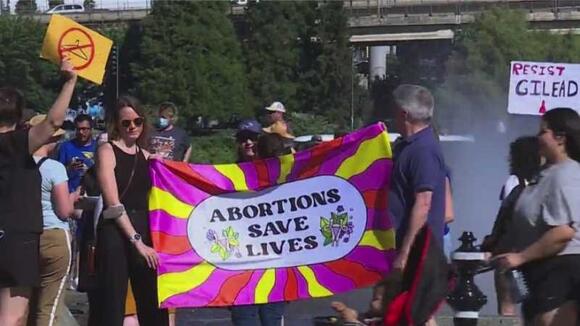 Surprised by last week's Kansas abortion vote? You shouldn't be, based on a new data uncovered by Oregon Values and Beliefs Center.

In a survey conducted by the Oregon Values and Beliefs Center, 1,572 Oregon residents aged 18 and over were asked a variety of abortion-related questions following the U.S. Supreme Court's ruling to overturn the historic Roe v. Wade decision.

Most significantly, 62% of Oregonians would vote to reinstate Roe v. Wade if given the opportunity, while 22% would vote to keep it overturned.

Secondly, 72% of Oregonians believe abortion in all or most circumstances should be legal, while 23% statewide said abortion should be illegal.

There is about an 18% difference between rural and urban residents on the topic of abortion, showing how support for legal abortions remains strong across Oregon. 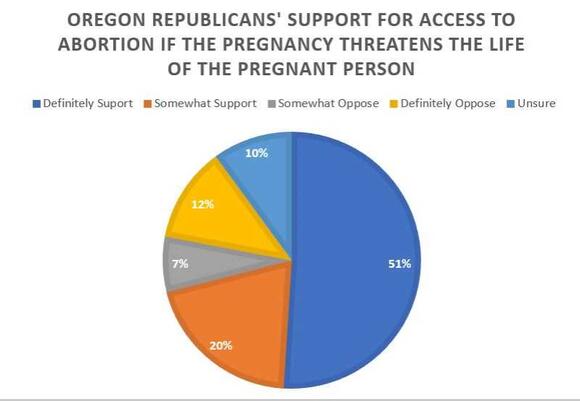 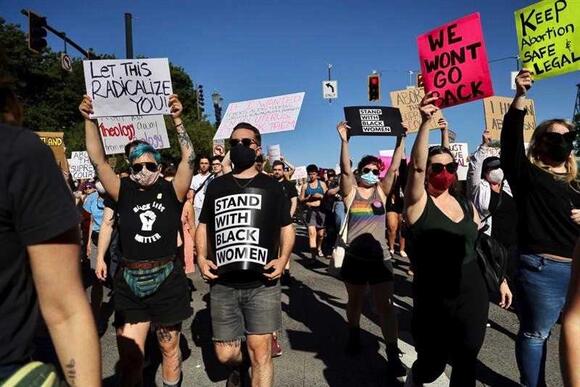 Recent election results in Kansas to oppose a total abortion ban are mirrored in Oregon's rural, Republican areas. Very rural Oregonians and Republican Oregonians overwhelming oppose a total ban on abortion, with 71% of Republicans supporting abortion access for people whose lives would be threatened by the pregnancy.

Strong opposition to a total ban among Oregon's independent and non-affiliated voters (82%) may explain something about how abortion is playing out in Oregon's three-way gubernatorial race so far. Republican Christine Drazan is downplaying abortion, and non-affiliated gubernatorial candidate Betsy Johnson is preventing any daylight between her and Tina Kotek on this issue. 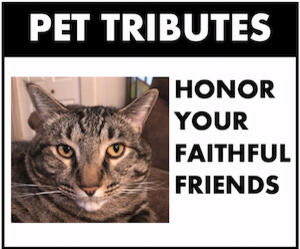 While much of Clackamas County is deemed suburban, neighboring communities such as Estacada, Eagle Creek, Beavercreek and Sandy are described as rural. 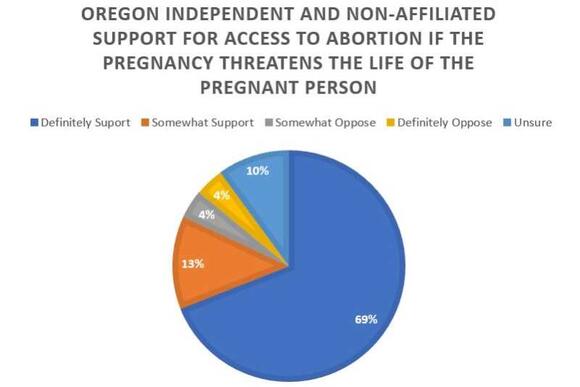 According to the survey, 79% of Oregonians living in urban areas are more likely to says abortion should be legal in all or most cases. This compares to the 61% of rural Oregonians who believe the same.

"Abortion is a health issue, not a political one," said Marla Edge, a woman who lives in suburban Clackamas County. "Women should be able to determine what is best for them."

The survey did not provide regional data about all Oregon counties, but did include direct quotes from a few Clackamas County residents.

"Choice is just that, women (with the advice of anyone whose opinion and/or knowledge they trust) have autonomous control over their own bodies, not the state and certainly not a religious faction imposing its beliefs on the rest of us," wrote Scott Hays, a male suburban Clackamas County resident. "Women who do not believe in abortion or who do not think it is the right thing for them to do are free to make that choice."

The survey also reflected differing voices on the topic of abortion rights.

"The only time I cannot support someone's right to abortion is when they use it as a form of birth control," said Lynn Spuhler, a man from rural Clackamas County. "I know women who have had three or more abortions. Abortion should be limited to one or two."

The survey was conducted online among Oregonians 18 and older from professionally maintained online panels. The polling group said its surveys are within the statistically valid margin of error.

The nonprofit is building a large research panel of Oregonians to ensure that all voices are represented in discussions of public policy in a valid and statistically reliable way.

Selected panelists earn points for their participation, which can be redeemed for cash or donated to a charity. To learn more, visit oregonvbc.org/about-the-panel.

Some exchanges hinted at personal feuds from when all three candidates served in the Oregon Legislature.The three top candidates for governor engaged in a sharp, rapid-fire debate in Bend on Tuesday, dipping into their campaign talking points during 90 minutes of rehashing old feuds while promising new beginnings. Unaffiliated candidate Betsy Johnson, Democrat Tina Kotek and Republican Christine Drazan offered different recollections of their shared time together in the Legislature. Kotek was House Speaker before resigning to run for governor. Drazan was the leader of the minority-party Republicans in the House before also stepping down to run. Johnson was a...
BEND, OR・5 DAYS AGO
Canby Herald

Senator Bill Kennemer is honored for his work by the National Federation of Independent Business.Oregon Sen. Bill Kennemer was honored for his dedication to small business around the state during a Sept. 26 ceremony in Canby. Kennemer was selected by NFIB's Oregon Leadership Council to receive a Guardians of Small Business award statue, recognizing his 100% voting record and his commitment to Oregon's Main Street entrepreneurs. "While a number of state legislators have earned the right to be called a Guardian of Small Business, Sen. Bill Kennemer deserves special recognition," said Anthony Smith, Oregon state director for...
OREGON STATE・4 DAYS AGO
Canby Herald

Your state's military personnel want you to know that those loud jet noises are here to help.Two fully armed F-15 C fighter jets sit 24/7 at Northeast Portland's National Guard Base waiting for their call to action. "The horn goes off, and in minutes, I jump into an airplane and I'm airborne," said Oregon Air National Guard Col. Aaron Mathena, who looks like he was chosen for the role of commanding officer by a Hollywood casting director but who speaks with the authority and poise his uniforms suggests. The 142nd has a mission to remain deployable worldwide. Or, according to...
OREGON STATE・6 DAYS AGO
Canby Herald

Director Richard Whitman abruptly resigned three months early citing personal reasons.SALEM — The Oregon Department of Environmental Quality is undergoing a change of leadership quicker than anticipated. Leah Feldon, DEQ deputy director since 2016, was appointed interim director of the agency at a meeting of the Environmental Quality Commission on Friday, Sept. 23, following the abrupt resignation of Director Richard Whitman. Whitman had committed to retiring at the end of 2022, but instead resigned three months early, citing "personal reasons" in an email to EQC Chairwoman Kathleen George. Feldon's first official day as interim director will be Friday, Sept. 30....
OREGON STATE・7 DAYS AGO

Oregon's flying military force members serve cities throughout the state with their volunteerism.Being local is "One of our strengths, one of our benefits, part of our charm as I like to say," said Oregon Air National Guard Col. Aaron Mathena. "As Col. (Todd A.) Hofford, our wing commander is fond of saying, we are the hometown air force." Being a guardsman, I have responsibilities monthly and annually but when I'm not under those responsibilities," Mathena said. "I support my local community, I support the community that I'm in, or I pursue my overseas job that may be paying the bills...
OREGON STATE・6 DAYS AGO
Canby Herald

Oregon is the only state without a Gold Star Family Memorial that honors those killed in the line of duty.Across the country, Gold Star Families Memorial Monuments honor members of the military who died in the line of duty. The tributes give relatives a space to grieve and reflect on their losses. They are located in cemeteries in every state — except Oregon. Now a project is underway to place one of the memorials in the Willamette National Cemetery in east Portland. It is led by local resident Nancy Menagh, president emeritus of Gold Star Wives of America. "The monument...
OREGON STATE・13 DAYS AGO
Canby Herald

Storm clouds on the horizon for Oregon housing industry

Flu vaccines are currently available at pharmacies and health care centers throughout the state.After more than two years of record lows, influenza — the flu — is making a comeback in Oregon, state researchers say. The latest COVID-19 report from Oregon Health & Science University, released on Friday, Sept. 16, showed the omicron variant of the virus remained active but controlled. But it's likely that the drop-off in masking and social distancing as the pandemic has moved into a less virulent stage has allowed for a resurgence of influenza. That combined with what's likely lower levels of vaccinations for the...
OREGON STATE・17 DAYS AGO

Bonamici: 'We have to buck history' with women in U.S. House

Three open-seat contests could result in a record four in Oregon's eight-member congressional delegation. U.S. Rep. Suzanne Bonamici hopes to have some female colleagues in Oregon's congressional delegation as a result of the Nov. 8 election. While the Democrat from Beaverton is expected to win a sixth full term in the 1st District of northwest Oregon, Democratic women are nominees for three Oregon open seats that could determine which party wins a majority in the U.S. House. Democrats now hold a majority by a handful of seats — but with a few exceptions, the party that holds the presidency generally...
OREGON STATE・22 DAYS AGO
Canby Herald

Power shutoffs, smoky skies: Is this the new normal?

Climate change is creating longer, drier fire seasons with more high wind dangers.Residents and businesses in the hills of Southwest and Northwest Portland are used to losing power during the winter. Ice and snow encased tree branches frequently fall and break power lines. But what happened the weekend of Sept. 10-11 was unprecedented. Portland General Electric voluntarily cut off power to those living and working in the city's wooded westside upper heights, even as temperatures were expected to soar to the high 90s over the weekend. The proactive outages eventually spread to 17 areas and affected more that 38,000...
PORTLAND, OR・20 DAYS AGO
Canby Herald

Helt endorsed in BOLI race by two candidates for governor

The labor commissioner position is officially nonpartisan but has drawn split endorsements.The officially nonpartisan race for commissioner of the Bureau of Labor and Industries — known by its acronym as "the BOLI" — has split along partisan lines. Former Rep. Cheri Helt, R-Bend, was endorsed this week by two candidates for governor. Former House Minority Leader Christine Drazan, R-Canby, the Republican nominee, announced she was backing Helt. Helt was also endorsed by former state Sen. Betsy Johnson, the Columbia County Democrat who resigned from the party and the Legislature to run as a non-affiliated candidate for governor....
OREGON STATE・25 DAYS AGO
Canby Herald

Portland Fire and Rescue contains a 2-alarm brush fire along I-205 around noon.Officials in the Willamette Valley are continuing to warn about fire asks because of continuing hot weather and steady winds. Portland firefighters battle a 2-alarm brush fire along I-205 near the Multi-Use Path, Gateway Green and the I-84 exit. There was no immediately word of the cause of the future, that was brought under control around noon on Saturday, Sept. 10. It could have easily spread without the quick response. Portland General Electric and Pacific Power began cutting power in high-risk areas early Friday to reduce fire risks....
PORTLAND, OR・23 DAYS AGO

Portland Fire and Rescue contains a 2-alarm brush fire along I-205 around noon.Officials in the Willamette Valley are continuing to warn about fire asks because of continuing hot weather and steady winds. Portland firefighters battled a 2-alarm brush fire along I-205 near the Multi-Use Path, Gateway Green and the I-84 exit Saturday, Sept. 10. There was no immediate word of the cause of the blaze, which was brought under control around noon. Portland General Electric and Pacific Power began cutting power in high-risk areas early Friday, Sept. 9, to reduce fire risks. PGE added five more areas late...
PORTLAND, OR・23 DAYS AGO

The Canby Herald is the community’s best source for local news, local readers count on. Every day it deliver stories about local people, events and what’s happening at city hall and in local schools.​