A FanNation channel dedicated to coverage of the Washington Commanders 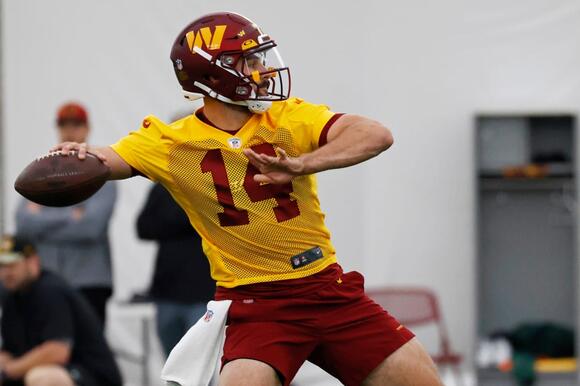 Howell was drafted in the fifth round of the NFL Draft this year.

The fifth-round rookie quarterback from North Carolina says that he doesn't feel like there's much of a change from college to the NFL.

"Yeah, I wouldn't say there's a major step," Howell said. "Obviously, we haven't started getting into games and game prep yet. I'm sure that the preparation is probably a little bit more in the NFL. But practice wise, I think just preparing for practice a little bit more."

Perhaps the best thing to happen to the Commanders rookie quarterback was sliding into Day 3 of the 2022 NFL Draft, even if it may not seem like it up front.

Now, Howell will get a chance to establish his NFL legs before being thrust into the spotlight; or such is the hope of Commanders fans everywhere.

Which is even better given the amount of learning required to fully execute offensive coordinator Scott Turner’s playbook.

"Yeah, I think it's all about reps," Howell said. "Just getting reps and trying to maximize every single rep that I have out there. And even when I'm not in, taking mental reps. I try to get a mental rep on every single play that we run in practice. So, I think it's only gonna come with reps and these preseason games.”

Instead of worrying about saving a fledgling franchise, we’re looking for Howell to simply get more comfortable with some mechanics he never had to execute at North Carolina, and show some flashes of why he was once considered a first-round lock.

Even though Howell likely won't play much once the regular season gets underway, he provides a ton of upside and optimism for the team's future at the position.

Maybe once plays in the preseason opener this weekend, he'll take that major step.

Maybe he needs a few defenses to land him on his butt. No problem with someone being confident, but disrespect for those who have preceded you deserves a good thrashing.

Commanders Facing Several Challenges vs. Eagles; Can Washington Overcome It?

Carson Wentz is leading the Washington Commanders against his former team this weekend. The Philadelphia Eagles are ready to go to 3-0 on the leadership of Jalen Hurts and A.J. Brown.
PHILADELPHIA, PA・2 DAYS AGO
Commander Country

Washington Commanders center Chase Roullier was placed on Injured Reserve this week after suffering a knee injury. So who will snap balls to Carson Wentz this weekend against the Philadelphia Eagles?
WASHINGTON, DC・1 DAY AGO
Commander Country

The Washington Commanders were one of many teams to pass on Amon-Ra St. Brown during the 2021 NFL Draft. And the Detroit Lions receiver made them regret it last weekend.
WASHINGTON, DC・2 DAYS AGO
Commander Country

The Washington Commanders are dealing with several injuries on the defensive line. Changes will have to be made against the Philadelphia Eagles on Sunday.
WASHINGTON, DC・1 DAY AGO

BALTIMORE -- The Baltimore Ravens have promoted wide receiver Raleigh Webb and linebacker Brandon Copeland from the team's practice squad.The Ravens made the announcement Saturday evening on the team's Twitter account.Copeland, 31, is a Carroll County native. He signed with the Raven's practice squad a few days ago.Head coach John Harbaugh said during a press conference on Sept. 21 that Copeland was "one who kind of sort of got away."Copeland spent last season with the Atlanta Falcons, playing 16 games, three of them starts, and recording 39 combined tackles, two quarterback hits and four tackles for loss.In his six-year career, Copeland played for the Detroit Lions, New York Jets and New England Patriots before joining Atlanta in 2021.A native of Sykesville, Copeland starred at the Gilman School before going on to play with the Penn Quakers at the college level.The Ravens signed Copeland as an undrafted free agent in 2013 and placed him on the practice squad coming out of training camp, but he was released in September and caught on with the Tennessee Titans.
BALTIMORE, MD・5 MINUTES AGO
Wildcats Today

A mixture of explosive offense and sluggish defense led to a 31-23 victory over Northern Illinois for the No. 8 Kentucky Wildcats on Saturday night in Lexington.  "Just overall a sluggish game," head coach Mark Stoops said after the win. "Good to get it behind us. We know it's a good football ...
LEXINGTON, KY・46 MINUTES AGO
VolunteerCountry

Highland Park (Ala.) defensive lineman Keldric Faulk was high on Tennessee before committing to Florida State in July, and while still firm in his commitment to the Seminoles, Faulk took another look at the Vols as they hosted No.20 Florida in a 38-33 thriller.  "I came up here with my little ...
KNOXVILLE, TN・45 MINUTES AGO
Commander Country

Washington will face Philadelphia in its first division matchup of the season.
PHILADELPHIA, PA・16 HOURS AGO

A FanNation channel dedicated to coverage of the Washington Commanders