The rebooted Beavis and Butt-Head love ASMR and TikTok. We should probably be worried 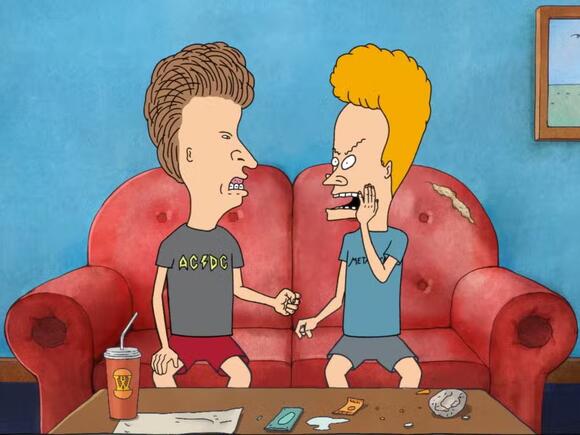 Nirvana had just dropped In Utero , the blistering third studio album that would turn out to be their last. A movie as wholesome and preposterous as Mrs Doubtfire was absolutely crushing it in cinemas. And people were dressed, well, honestly, exactly how they’re dressed right now: crop tops, torn denim and platform shoes in matchy-matchy colour combos. But perhaps nothing captures 1993 more evocatively than the launch of MTV ’s Beavis and Butt-head , a show with the nihilistic urge to prove that sitcoms need not centre on charismatic leading men to be successful. They barely even need jokes.

Launched a few years after The Simpsons , Beavis and Butt-head was one of the defining cartoons of the time, even as mothers across the US and UK forbid their kids from watching it. It was ruder than The Simpsons and also more senseless. Plus there was the matter of their obnoxious laugh, an unappealing guttural noise that was their automatic response to everything and nothing.

I suppose I should say “is” their automatic response. Yes, the beloved and abhorred animated duo Beavis and Butt-head have joined the ranks of characters rescued from the dark waters of TV history and rebooted because, well, that’s what we do now. In the new 12 episode series from Paramount +, the boys – dumb, unpleasant and teenaged as they ever were – wear the same band T-shirts (AC/DC and Metallica) and sit on the same tatty sofa hurling insults at the TV, now upgraded to a flatscreen.

It’s the world around Beavis and Butt-head that’s changed. They used to be amateur rock video pundits, but since we saw them last – there was another brief revival of the Mike Judge hit in 2011, plus two films – their cultural remit has expanded to include college acceptance videos (cringe), prison TikTok (strangely informative) and ASMR content from YouTube star Gibi (more later).

I didn’t watch the show often during its original seven-season run on MTV. My mother, who found cartoons made for adults unsettling, was among those who banned it – a lame choice that aged badly (sorry, mom). Along with The Simpsons and MTV’s sci-fi cartoon Aeon Flux , Beavis and Butt-head was part of an early wave of animated sitcoms that were mature enough to air in the prime-time block. The prolific Judge would go on to make King of the Hill , which premiered the same year as Family Guy and South Park . Before there was the heart-pinching pathos of Bojack Horseman or the acerbic wit of Archer , there were these two idiots talking – futilely – about how much they’d like to score with some “chicks”.

Judging by the first two episodes of the new series, I’m tempted to say Beavis and Butt-head were ahead of their time. They were internet trolls before the internet was available for public use. They were frustrated virgins before the invention of incels. They were the OG shitposters of real-life analogue conversation.

Never is this more clear than in the series’ interstices – the odd breaks between and within the two longer sketches that make up the bulk of a Beavis and Butt-head episode. In the most telling instalment to air so far, the pair sit down in Beavis’s living room to watch an ASMR video.

For the uninitiated, ASMR stands for autonomic sensory meridian response, and it refers to the pleasurable tingling sensation people can experience when they hear soft sounds like tapping, scratching and whispered plosives. The boys watch a video by a real-life ASMR artist called Gibi, who has more than 4 million subscribers on YouTube. In the decidedly unsexy clip, Gibi runs her painted nails down a plastic hairbrush and opens a chipboard box of children’s markers over and over again. To give you a sense of ASMR’s popularity, this one video – out of the 946 Gibi’s posted – runs 30 minutes long and has 1.3 million views. Beavis and Butt-head are instantly seduced by her actions. Their voices grow softer as they reflexively mirror Gibi’s. Their gratingly obnoxious laughter is downgraded to abrasive. Of course, Beavis ruins the moment by mentioning his “boner”. 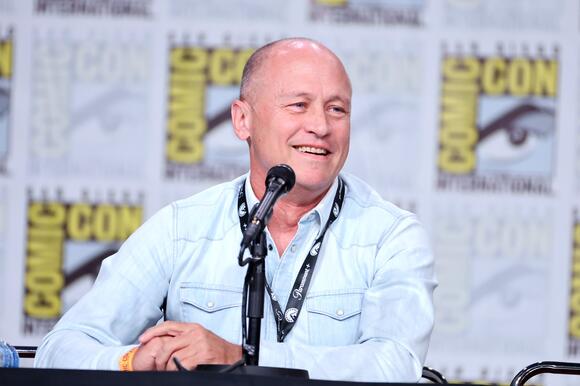 But it stands out because Beavis and Butt-head usually hate what they watch, from soppy country music videos to tacky clips of kids learning they got into Harvard. As a viewer, it generally feels OK to hate what Beavis and Butt-head hate. But what does it mean that this is the part of contemporary culture these two idiots like?

The original Beavis and Butt-head was (sometimes) lauded as intelligent satire, even if moms didn’t get it. To be fair, it was also called “crude”, “ugly”, “self-destructive” and “socially pernicious” – criticisms I doubt we’ll see repeated. Because when Beavis and Butt-head were hurling insults at Korn videos in the mid-90s, they seemed like ineffectual little punks. Who cares what they like? Certainly not the MTV programming exec deciding what band to put in rotation. But culture is directly democratic now: we vote with our clicks. Online, two virginal losers with dubious hygiene matter as much as anyone else.

For better or worse, the milieu in which we’re revisiting Beavis and Butt-head demands we pay more attention to the idle thoughts of teenage boys. Teenagers grew up on the internet, and now they make the internet. They decide what’s cool on TikTok, and if they spend half an hour watching a pretty stranger run her fingernails across plastic markers like she’s playing a barely audible harp, then that’s what we’ll get more of.

Who cares what Beavis and Butt-head like? In 2022, the answer is everybody .

Sylvester Stallone and his wife Jennifer Flavin are reportedly back together, one month after the former model filed for divorce from her husband of 25 years. On Friday, Page Six reported that a representative for the 76-year-old actor said that he and Flavin have rekindled their relationship and were very “happy”.
CELEBRITIES・1 DAY AGO
The Independent

Charlize Theron explains why she turned down relationship during pandemic: ‘I just feel so out of practice’

Charlize Theron has spoken candidly about her hesitations when it comes to romantic relationships, with the actor revealing that she feels “so out of practise”.The Snow White and the Huntsman star, 47, opened up about her dating life, and the relationship she nearly entered during the pandemic, in a new interview with Harper’s Bazaar.According to Theron, who said she is currently single, she met someone during the pandemic who was interested in “doing this thing with me”.However, the actor said she ultimately turned down the opportunity with the unnamed individual because she wasn’t sure if she wanted to be...
CELEBRITIES・2 DAYS AGO
shefinds

Kelly Clarkson Lit Up The Stage In A Low-Cut Black Dress—She Looks Incredible!

Kelly Clarkson made a stunning appearance at the 74th annual Emmy Awards in Los Angeles last week, rocking a glamorous, classic LBD! The “Since U Been Gone” hitmaker, 40, rocked a low-cut, floor-length, long-sleeved black gown by Gucci with pleated detailing and an overall draping, goddess-like fit. The Kelly Clarkson Show host attended the Microsoft Theater event and presented Zendaya with her historical ‘Outstanding Lead Actress in a Drama Series’ with a smile, as her shimmering accessories shined in the stage lights.
LOS ANGELES, CA・1 DAY AGO
The Independent

TV host Billy Bush has sparked backlash after describing tensions among Prince Harry, Meghan Markle and other members of the royal family as “delicious” during a segment about Queen Elizabeth II’s funeral.The former CBS host, who is now the host of Extra, made the comments while speaking to Gayle King during a segment filmed in London on Monday, the day of the Queen’s state funeral.After discussing the attendance of the Prince and Princess of Wales’ two eldest children at the funeral, Bush turned his attention to the Duke and Duchess of Sussex, and the “drama” he claims is associated...
CELEBRITIES・2 DAYS AGO

Todd Bridges, who famously played Willis on "Diff'rent Strokes," has tied the knot for a second time ... this time with a low-key Bev Hills ceremony. Sources at the wedding tell TMZ ... Todd married a woman named Bettijo on Wednesday at Greystone Mansion & Gardens, and it was an intimate and exclusive affair for those closest to the bride and groom.
BEVERLY HILLS, CA・1 DAY AGO
The Independent

Bill Turnbull was a popular presenter and broadcaster who appeared regularly on BBC radio and television over the last four decades.Turnbull, who has died aged 66, was a familiar and friendly face to viewers of BBC Breakfast, the morning news and current affairs programme he presented for 15 years with colleagues such as Sian Williams.William Turnbull was born in Guildford, Surrey, in 1956, to William, a barrister, and Honor, a teacher. He was educated at Eton, and at the University of Edinburgh, where he studied politics. It was at university that he got his first taste of journalism, editing the...
CELEBRITIES・5 HOURS AGO
The Independent

Olivia Wilde and Florence Pugh did not have a “screaming match” on the set of Don’t Worry Darling, according to the film’s crew.The psychological thriller, which was released on Friday (23 September), has been plagued with reports of behind-the-scenes drama, in particularly regarding an alleged feud between director Wilde and star Pugh.A recent report by Vulture, citing an anonymous source who spent a significant amount of time on set, alleged that the pair even once got into a verbal altercation on set.According to the source, news of the hostility got back to studio executives, with Warner Bros’s Toby Emmerich...
MOVIES・8 HOURS AGO
The Independent

The Crown will return to our screens this autumn as a new cast step into the shoes of Queen Elizabeth II and the royal family.Netflix’s historical drama has seen a resurgence in interest around the world following the death of the monarch earlier this month.During the streamer’s fan event Tudum on Saturday (24 September), Netflix announced that season five of The Crown would be arriving on Wednesday 9 November.Imelda Staunton will be taking over from Olivia Colman as the Queen, with Jonathan Pryce playing her late husband Prince Philip.Australian actor Elizabeth Debicki is playing Princess Diana, while Dominic West...
TV & VIDEOS・11 HOURS AGO

Strictly 2022: Shirley Ballas gets ‘muddled up’ in scoring blunder during first live show

Shirley Ballas found herself in “a bit of a muddle” during the first Strictly Come Dancing live show.The new series kicked off on Saturday (24 September) as all 15 couples danced together for the first time.You can find out about all the couples competing on Strictly 2022 here.Second to dance were Kiss FM DJ Tyler West and his professional partner Dianne Buswell, who performed the American Smooth to “Falling” by Harry Styles.The couple received a mixed reception from the judges, but were praised by head judge Ballas, who said that West “just put [Buswell] in the most beautiful space”...
TV SHOWS・9 HOURS AGO