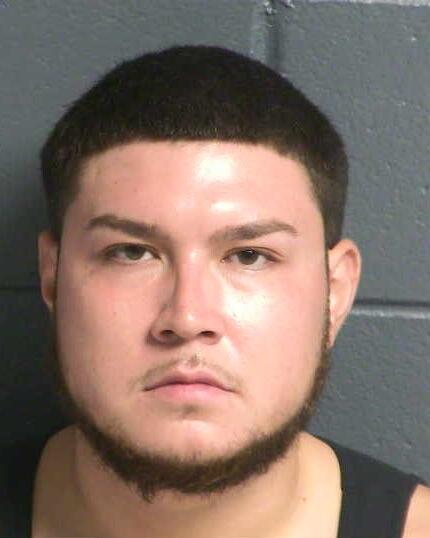 LAS CRUCES, New Mexico -- Officials with the Las Cruces Police Department said the man involved in Friday's road rage shooting incident has been identified. The shooting resulted in a 3-year-old girl getting struck by gunfire.

On Friday, the occupants of a dark blue Honda Civic got into a road rage altercation with the driver of a black pickup truck. The shooting happened near the intersection of Amador Avenue and Valley Drive.

Jimenez is suspected of pointing a firearm and shooting at least one round at the pickup truck.

Gunfire struck a 3-year-old child who was a backseat passenger. She was airlifted to UMC in El Paso.

The victim continues to recover from her injuries.

Jimenez is charged with one count of shooting at or from a motor vehicle causing great bodily injury, three counts of aggravated assault with a deadly weapon and one count of tampering with evidence.

Officials also learned the identity of the driver of the Honda Civic during the incident, but no charges have been filed against the driver.

Jimenez also acknowledged his involvement in the shooting.

When you feel slighted on the highway slow down 5 miles BELOW the speed limit and cool your jets. It ain’t that serious….driving is not a competition unless it’s done on a closed track

Once you catch the suspect , you run his ID information and upon inquiry through dispatch it’ll tell you if your suspect is a felon or not. So that’s a given right off the bat in NM. * He probably turned himself in because his vehicle was plastered all over social media with plate info. I Just Pray for the 3 year old little girl and hope she makes a successful and speedy recovery! God Bless our City!!!!

We need to know if he is a felon with a gun, who purchased the gun, stolen, give the facts on the gun.

EL PASO, Texas -- The El Paso Fire Department responded to a fire at 4:31 am in central El Paso. It happened at the 5700 block of Alameda not far from the Fox Plaza Shopping Center. Nine Units are currently at the scene as well as Police. The fire has already been put out. The The post Fire Investigation in Central El Paso appeared first on KVIA.
EL PASO, TX・1 DAY AGO
KVIA ABC-7

LAS CRUCES, New Mexico -- A transitional housing program for individuals seeking services in the community is underway in a residential neighborhood just down the street from Hermosa Heights Elementary School. Angels With Broken Wings is a nonprofit organization that will provide housing for up to nine men who are motivated to change. The peer-run The post Las Cruces transitional housing program to help individuals seeking services in the community appeared first on KVIA.
LAS CRUCES, NM・21 HOURS AGO
KVIA ABC-7

EL PASO, Texas --A family is searching for answers after the tragic loss of one of their own. 28-year-old Manuel Sanchez Jr. lived with his parents and his youngest sister, who has Down syndrome. Sanchez also had a form of high functioning Down syndrome, living a very normal life. They had just moved to El The post Family living a nightmare after son was murdered and burned in the desert appeared first on KVIA.
9 DAYS AGO
KVIA ABC-7

Why does cold air make your tire pressure go low?

EL PASO, Texas -- As the weather goes from hot to cold, the air molecules begin to slow and move closer together in cold weather. Cold air is denser; it takes up less space in objects like a car tire. For every 10-degree drop in air temperature, the pressure in a car tire will fall The post Why does cold air make your tire pressure go low? appeared first on KVIA.
EL PASO, TX・1 DAY AGO
KVIA ABC-7

PICACHO HILLS, New Mexico - Robert Yacone is accused of shooting and murdering his wife, Kimberly Yacone. The shooting happened at their home in Picacho Hills Sunday. During the son's call to 911, you hear the stepson saying she is losing lots of blood and is dead. You hear him say she is bleeding from The post 911 call shows the shock a stepson felt when he found his step-mom shot dead appeared first on KVIA.
LAS CRUCES, NM・14 DAYS AGO

EL PASO, Texas -- A memorable night for the borderland as Pitbull's concert made a stop in El Paso. Eager fans waited in line ahead of Pitbull's return to the 915. 'I'm watching Pitbull. Just gonna be right front. It's gonna be fun," said Diana Rios, a Pitbull fan. One fan waited months for this moment.  "We've The post El Paso fans flock to the Don Haskins for Pitbull concert appeared first on KVIA.
EL PASO, TX・3 DAYS AGO
KVIA ABC-7

LAS CRUCES, New Mexico -- A person has been taken into custody following an incident near Booker T. Washington Elementary School. Police responded this morning before 7 a.m. The school was on lockdown due to a barricaded person within 50 yards of the school playground. There were no injuries reported. This is a developing news The post Person taken into custody after incident near Booker T. Washington Elementary appeared first on KVIA.
LAS CRUCES, NM・14 DAYS AGO
KVIA ABC-7

EL PASO, Texas -- Three people were arrested in Juarez Wednesday for possession of about 12,000 fentanyl pills, two firearms, and methamphetamine. They intended to smuggle and sell the items in the U.S., that's according the Juarez Municipal Government. Officials say a 2008 Toyota Tundra truck with New Mexico license plates was pulled over in Batalla de Chamizal and The post 3 People arrested for trying to cross Fentanyl appeared first on KVIA.
EL PASO, TX・14 DAYS AGO
KVIA ABC-7

LAS CRUCES, New Mexico --One person is dead after a shooting in Las Cruces. It happened Sunday night at around 8:00 p.m. at the 6500 block of Vista del Oro. Police say that one man from inside the home called 911. When crews arrived, one female was found dead at the scene. Officials say that The post Deadly shooting in Las Cruces appeared first on KVIA.
LAS CRUCES, NM・17 DAYS AGO

EL PASO, Texas - The final touches are being put on two 7-foot swords, that will soon be on display at Hank's High School, home of the Knights. The swords are a gift to the school from former state Rep. Joe Pickett. After stepping down from politics due to a cancer diagnosis in 2019, he The post A Local high school is receiving a gift fit for a knight appeared first on KVIA.
EL PASO, TX・9 DAYS AGO
KVIA ABC-7

Crash shuts down I-10 east just outside Deming

UPDATE: The New Mexico Department of Transportation reports that I-10 east is now open following a crash. The crash was described as a multiple CMV crash. DEMING, New Mexico -- I-10 eastbound lanes are closed due to a crash just east of Deming. Motorists are asked to reduce speed and use extreme caution. Motorists should The post Crash shuts down I-10 east just outside Deming appeared first on KVIA.
DEMING, NM・14 DAYS AGO
KVIA ABC-7

EL PASO, Texas– The Stand with Estela Casas Cancer Foundation kicks off its inaugural 5k run at Ascarate Park Saturday morning. The 5k took place on the first day of National Breast Cancer Awareness Month on Oct. 1 and runs from 8 am until 12 pm. In addition of the 5k race, the event will The post Stand with Estela Casas 5K run takes place Saturday appeared first on KVIA.
EL PASO, TX・5 DAYS AGO
KVIA ABC-7

EL PASO, Texas– Happening Sunday a bronze statue of Mexican President Benito Juárez will be unveiled at Chamizal National Memorial in South-Central El Paso. The project is a way to celebrate the rich history of Paso Del Norte. To do this there are plans to create 12 sculptures of historical figures that had an impact The post Unveiling Ceremony of Benito Juarez Statue takes place Sunday appeared first on KVIA.
EL PASO, TX・11 DAYS AGO
KVIA ABC-7

JUAREZ, Chihuahua -- The El Paso County Animal Welfare Department is developing a low-cost pet wellness clinic in Horizon city. The facility is set to be used to offer low-cost spaying and neutering, microchipping, flea and tick preventative and dewormer services to pets across the county. This clinic will be turned into the home of The post El Paso County set to create an educational pathway for Juarez veterinary students appeared first on KVIA.
EL PASO COUNTY, TX・15 DAYS AGO
KVIA ABC-7