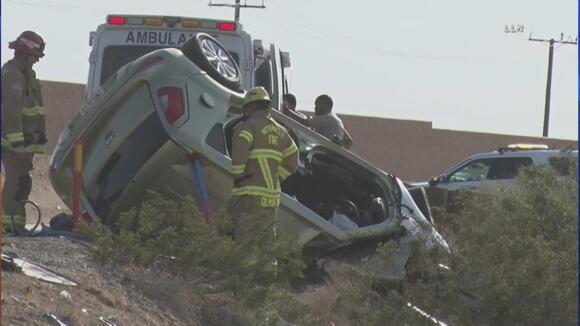 A 25-year-old Victorville man is dead after a four-car crash in Victorville that resulted in two vehicles catching fire on Sunday afternoon.

The crash occurred at about 5 p.m. on Air Expressway near Nevada Avenue, according to a release from the San Bernardino County Sheriff’s Department .

The man who died was driving a 2007 Toyota Corolla and tried to pass another vehicle by going into oncoming traffic, but instead “collided head on with a Chevrolet Silverado followed by a Kia Soul,” the Sheriff’s Department said.

“The Corolla and the Silverado immediately engulfed into flames. The impact caused the Soul to roll multiple times and struck a Volkswagen Jetta,” the release added.

The 25-year-old man “suffered major injuries” and was declared dead at the scene. His identity is being withheld until his family is notified.

Anyone who witnessed the crash is asked to call Deputy Tyler Whitcomb or Sgt. Nicholas Clark at 760-241-2911.

Man killed by law enforcement after pinning deputy with his car in Rancho Cucamonga: SBSD

A Santa Monica man was shot and killed by San Bernardino County Sheriff’s Department deputies Saturday evening after he allegedly pinned a deputy with his car and then tried to attack him with a knife. It happened around 7:15 p.m. on the 11800 block of Foothill Boulevard in Rancho Cucamonga. Deputies were in the area […]
RANCHO CUCAMONGA, CA・1 DAY AGO
KTLA

An out-of-control Prius stopped just feet away from a bedroom after it crashed through a brick wall in Pomona Sunday night. The incident was reported near the intersection of Orange Grove Avenue and Fairplex Drive at 11:46 p.m., a Pomona Police Department spokesperson confirmed. Arriving officers found a hole in a brick wall that surrounded […]
POMONA, CA・4 HOURS AGO
KTLA

An Amber Alert has been issued after a man wanted on suspicion of killing a woman in a domestic violence shooting allegedly abducted his 15-year-old daughter. The shooting was reported about 7:35 a.m. near the intersection of Mallory Street and Cypress Avenue. The scene is near Cypress Elementary School, which was temporarily locked down amid […]
FONTANA, CA・6 HOURS AGO
KTLA

Three juvenile boys have been arrested for allegedly robbing a person at gunpoint and stealing their jewelry. It happened Friday evening around 7 p.m. at a home on the 600 block of Poo’ish Drive in San Jacinto. According to the Riverside County Sheriff’s Department, the three suspects were seen walking away from the scene of […]
SAN JACINTO, CA・2 DAYS AGO

Hazmat teams with the Riverside County Fire Department were working to clear an unknown, caustic substance at a container recycling center in Jurupa Valley Friday morning.   Calls for a medical emergency came in around 10:15 a.m. at the center on the 2200 block of Via Cerro. When first responders arrived, they found one person […]
JURUPA VALLEY, CA・3 DAYS AGO
KTLA

A Riverside man has pleaded guilty on Wednesday to breaching the U.S. Capitol during the January 6 riots in 2021. The suspect, 45-year-old Andrew Alan Hernandez, is facing felony charges after pleading guilty to aiding and abetting in the obstruction of an official proceeding. He could face up to 20 years in prison with additional […]
RIVERSIDE, CA・3 DAYS AGO
KTLA

Pumpkin spice lattes, Halloween décor and the hopes of slightly cooler weather can only mean one thing; the fall season has started in California. While some break out their fall wardrobe and pumpkin-scented candles in August, there is one seasonal tradition Californians have to wait a bit longer to indulge in –  picking the perfect […]
CALIFORNIA STATE・3 DAYS AGO
KTLA

Hayley Hasselhoff is the daughter of, “Baywatch’s” David Hasselhoff and like her father, she is making big strides in this world. Hasselhoff wears many hats in her life such as being a body-positive beauty model to being a mental health advocate and a podcast host. Now the model is swapping out her many hats for […]
PASADENA, CA・4 HOURS AGO