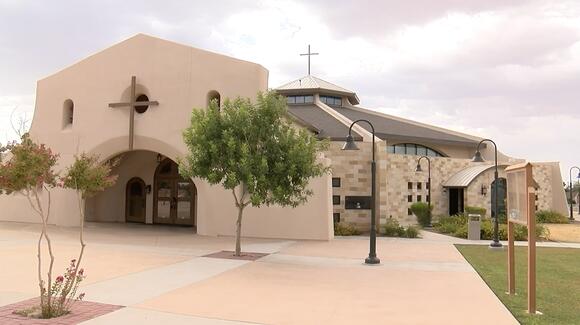 According to officials with the Catholic Diocese of El Paso, an altercation broke out between two people outside the church building outside of the sanctuary.

Police said a weapon was displayed.

The call came in as an aggravated assault around 11:30 a.m.

Diocese officials confirmed the no threats were made to church congregants and mass was not interrupted.

The Diocese continues to cooperate with the El Paso Police Department in their investigation.

EL PASO, Texas -- The El Paso Fire Department responded to a fire at 4:31 am in central El Paso. It happened at the 5700 block of Alameda not far from the Fox Plaza Shopping Center. Nine Units are currently at the scene as well as Police. The fire has already been put out. The The post Fire Investigation in Central El Paso appeared first on KVIA.
EL PASO, TX・1 DAY AGO
KVIA ABC-7

LAS CRUCES, New Mexico -- A transitional housing program for individuals seeking services in the community is underway in a residential neighborhood just down the street from Hermosa Heights Elementary School. Angels With Broken Wings is a nonprofit organization that will provide housing for up to nine men who are motivated to change. The peer-run The post Las Cruces transitional housing program to help individuals seeking services in the community appeared first on KVIA.
LAS CRUCES, NM・21 HOURS AGO
KVIA ABC-7

LAS CRUCES, New Mexico -- Las Cruces police are responding to a SWAT call near Solano and Colorado. Police say it's in relation to a family domestic disturbance. A man has barricaded himself in a home. Police say they are trying to establish communication with the man and encourage him to come out peacefully. This The post SWAT call in Las Cruces; man barricaded in home appeared first on KVIA.
LAS CRUCES, NM・7 DAYS AGO

While many areas in Florida remain inaccessible due to Hurricane Ian’s storm surge, flood waters are slowly receding in others. Neighborhoods that were previously cut off are finally able to receive service. The Salvation Army teams on the ground in Florida are using Polaris off-road vehicles this week to distribute meals in neighborhoods still not The post The Salvation Army Hurricane Ian Efforts appeared first on KVIA.
FLORIDA STATE・2 DAYS AGO
KVIA ABC-7

EL PASO, Texas -- A memorable night for the borderland as Pitbull's concert made a stop in El Paso. Eager fans waited in line ahead of Pitbull's return to the 915. 'I'm watching Pitbull. Just gonna be right front. It's gonna be fun," said Diana Rios, a Pitbull fan. One fan waited months for this moment.  "We've The post El Paso fans flock to the Don Haskins for Pitbull concert appeared first on KVIA.
EL PASO, TX・3 DAYS AGO
KVIA ABC-7

EL PASO, Texas -- U.S. Border Patrol agents are helping in an investigation related to a shooting. According to the Border Patrol, agents from the Sierra Blanca checkpoint received a call from the Hudspeth County Sheriff's Office Tuesday night around 9:17 p.m. The Border Patrol says they were asked to help them locate a female The post Woman shot in Hudspeth County appeared first on KVIA.
HUDSPETH COUNTY, TX・8 DAYS AGO

UPDATE: Two migrants were shot, and one person was killed Tuesday night in Hudspeth County, according to Sheriff Arvin West. No arrests have been made. According to the FBI, they do not believe there is a current threat or pending threat to public safety. EL PASO, Texas -- U.S. Border Patrol agents are helping in The post Two migrants shot in Hudspeth County, one person killed appeared first on KVIA.
HUDSPETH COUNTY, TX・8 DAYS AGO
KVIA ABC-7

EL PASO, Texas– The Stand with Estela Casas Cancer Foundation kicks off its inaugural 5k run at Ascarate Park Saturday morning. The 5k took place on the first day of National Breast Cancer Awareness Month on Oct. 1 and runs from 8 am until 12 pm. In addition of the 5k race, the event will The post Stand with Estela Casas 5K run takes place Saturday appeared first on KVIA.
EL PASO, TX・5 DAYS AGO
KVIA ABC-7

Why does cold air make your tire pressure go low?

EL PASO, Texas -- As the weather goes from hot to cold, the air molecules begin to slow and move closer together in cold weather. Cold air is denser; it takes up less space in objects like a car tire. For every 10-degree drop in air temperature, the pressure in a car tire will fall The post Why does cold air make your tire pressure go low? appeared first on KVIA.
EL PASO, TX・1 DAY AGO

EL PASO, Texas– Happening Sunday a bronze statue of Mexican President Benito Juárez will be unveiled at Chamizal National Memorial in South-Central El Paso. The project is a way to celebrate the rich history of Paso Del Norte. To do this there are plans to create 12 sculptures of historical figures that had an impact The post Unveiling Ceremony of Benito Juarez Statue takes place Sunday appeared first on KVIA.
EL PASO, TX・11 DAYS AGO
KVIA ABC-7

EL PASO, Texas - The final touches are being put on two 7-foot swords, that will soon be on display at Hank's High School, home of the Knights. The swords are a gift to the school from former state Rep. Joe Pickett. After stepping down from politics due to a cancer diagnosis in 2019, he The post A Local high school is receiving a gift fit for a knight appeared first on KVIA.
EL PASO, TX・9 DAYS AGO
KVIA ABC-7

Las Palmas Del Sol Healthcare is hosting a Nurses hiring event. The event will be at start at 4 pm to 7 pm at Southwest University Park Stadium. Individuals will be eligible for up to $25,000 in a sign-on bonus depending on their title and specialty.Interviews will be conducted at the event, and candidates are The post Job Fairs Happening Today appeared first on KVIA.
EL PASO, TX・2 DAYS AGO

EL PASO, Texas -- Three people were arrested in Juarez Wednesday for possession of about 12,000 fentanyl pills, two firearms, and methamphetamine. They intended to smuggle and sell the items in the U.S., that's according the Juarez Municipal Government. Officials say a 2008 Toyota Tundra truck with New Mexico license plates was pulled over in Batalla de Chamizal and The post 3 People arrested for trying to cross Fentanyl appeared first on KVIA.
EL PASO, TX・14 DAYS AGO
KVIA ABC-7

PICACHO HILLS, New Mexico - Robert Yacone is accused of shooting and murdering his wife, Kimberly Yacone. The shooting happened at their home in Picacho Hills Sunday. During the son's call to 911, you hear the stepson saying she is losing lots of blood and is dead. You hear him say she is bleeding from The post 911 call shows the shock a stepson felt when he found his step-mom shot dead appeared first on KVIA.
LAS CRUCES, NM・14 DAYS AGO
KVIA ABC-7

LAS CRUCES, New Mexico -- A person has been taken into custody following an incident near Booker T. Washington Elementary School. Police responded this morning before 7 a.m. The school was on lockdown due to a barricaded person within 50 yards of the school playground. There were no injuries reported. This is a developing news The post Person taken into custody after incident near Booker T. Washington Elementary appeared first on KVIA.
LAS CRUCES, NM・14 DAYS AGO
KVIA ABC-7