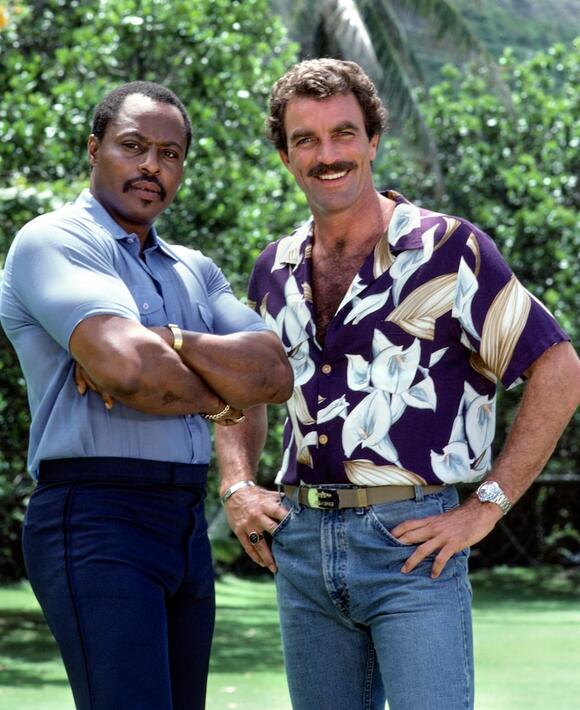 Actor Roger E. Mosley, who starred on all eight seasons of "Magnum, P.I." with Tom Selleck, died Sunday at 83.

The cause was injuries received in a car crash in Lynwood, California, on Thursday. Following the accident, THR reports Mosley had been transported to Cedars-Sinai Medical Center in L.A.

Born December 18, 1938, he was raised in Watts, California. A high school wrestler, he was studying acting under Raymond St. Jacques at the Mafundi Institute there when he challenged a visiting producer on the subject of sacrifice. Mosley's audacity led to a studio visit.

But it was his forgotten film "Terminal Island" (1973) that proved most important to Mosley's career — his co-star, Tom Selleck, was later signed to shoot a pilot called "Magnum, P.I.," and producers were looking for a man of color to play the character T.C. Selleck recommended Mosley, who never expected a series pickup.

Mosley took the representation his role offered seriously, fighting for T.C. to be well-off, well-read, and averse to partying. In a 1982 Ebony magazine interview, he explained his character didn't drug or drink because, "That's not what I want Black kids to see."

His final work was a two-episode arc on the new "Magnum P.I.," though he did not revive T.C., instead playing a new part.

Mosley is survived by his wife of nearly 60 years, Toni, his son Brandonn, his daugher Ch-a, one grandson, and many nieces and nephews.

On Facebook, his daughter memorialized him with: "Roger E. Mosley, my father, your friend, your 'coach Mosley' your 'TC' from Magnum P.I., passed away at 1:17am. He was surrounded by family as he transcended peacefully. We could never mourn such an amazing man. He would HATE any crying done in his name. It is time to celebrate the legacy he left for us all. I love you daddy. You loved me too. My heart is heavy but I am strong. I will care for mommy, your love of almost 60 years. You raised me well and she is in good hands. Rest easy."

You got your winds now bro! Thanks for keeping me entertained and out of trouble as a kid RIP TC those were the good days back then with good tv shows🙏🏿🙏🏿🙏🏿🙏🏿🙏🏿😇😇😍😇👍🏿😃

my Condolences to his family 🙏Mr. Mosley was a very Great actorhe's truly going to be missedS.I.P.

Abba YHVH in the name of Yeshua may the RUACH HAKODESH COMFORT HIS FAMILY. Mr Mosley was a great actor I think he made the show. . I pray he's at peace.

The Rock Says ‘Angels of Mercy’ Watched Over Mom During L.A. Car Crash

Dwayne “The Rock” Johnson is thanking the lord after his mother Ata Johnson, 74, survived a car accident in L.A. The actor took to Instagram to show a photo of her damaged red Cadillac, writing, “Thank you God 🙏🏾 she’s ok.”. He continued, “Angels...
LOS ANGELES, CA・1 DAY AGO
extratv

Months after singer Irene Cara’s death at age 63, new details have been released. According to medical documents, obtained by TMZ, Cara’s official cause of death was arteriosclerotic and hypertensive cardiovascular disease. The docs also revealed that Irene was diabetic. In November, her publicist Judith A. Moose broke...
FLORIDA STATE・2 DAYS AGO
extratv

Cindy Williams, the actress known for her performances on "Laverne & Shirley" and in the film "American Graffiti," died Wednesday at 75 after "a brief illness," "Extra" has confirmed. A statement from her children reads, "The passing of our kind, hilarious mother, Cindy Williams, has brought us insurmountable sadness that...
CALIFORNIA STATE・5 DAYS AGO
extratv

“Extra” caught up with Kyle Richards at the 2023 Red Dress Collection in NYC, where she reacted to rumors that she uses Ozempic for weight loss. Kyle called the gossip “frustrating,” saying, “I cannot stand people saying that because people that know me know that I’m up every day at like 5, 6 a.m. at the latest… I’m in the gym for two hours. I really put a lot of effort into my diet and exercise and taking care of myself, so when people like to think I took the easy way out, it’s frustrating."
NEW YORK CITY, NY・3 DAYS AGO