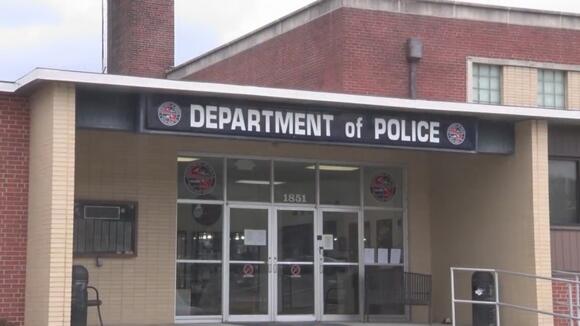 TAZEWELL COUNTY, VA (WVNS) — Officers with the Richlands Police Department responded to a call at Richlands High School on Saturday, August 6, 2022, at 7:22 p.m.

One man was asked to leave Ernie Hicks stadium, as staff reportedly said the man was intoxicated. They also noticed he had a gun with him while inside the stadium.

Witnesses said he fled the scene and then crashed his vehicle. Residents near the crash said he then fled the scene. Due to the fact he had a gun on school grounds, officials asked attendees, players, and coaches to shelter in place unitl the situation was dealt with.

Cochran was charged with Possession of a Firearm on School Property, Carrying a Handgun in Public While Intoxicated, Driving Under the Influence, and a Hit and Run of Unattended Property.

He was taken to Tazewell County Regional Jail.

There was also a passenger in the vehicle with Cochran, who was charged with underage possession of alcohol by consumption.

RALEIGH COUNTY, WV (WVNS)– The daughter of a 46-year-old Wyoming County man who died at Southern Regional Jail recently said she wants U.S. Senator Joe Manchin to order a federal investigation of administrative oversight and practices at the jail. The woman’s father, Alvis Shrewsbury is the fifth person who is known to have died at […]
WYOMING COUNTY, WV・6 DAYS AGO

BECKLEY, WV (WVNS) — The Beckley Travel Plaza on I-77 is closed following a fire. According to David Wriston, Fire Chief of the Bradley Prosperity Volunteer Fire Department, the fire started as a grease fire in Burger King. Employees called 911 and evacuated. Wriston said the fire was contained within 30 minutes. Bradley Prosperity Volunteer […]
BECKLEY, WV・4 DAYS AGO
WVNS

BECKLEY, WV (WVNS) – An early morning fire happened at the Beckley Travel Plaza on the Turnpike today, Friday, September 23, 2022. A reported grease fire at a fast-food restaurant closed the Beckley Travel Plaza on the West Virginia Turnpike earlier this morning. The fire was ruled entirely accidental by firefighters and was turned over […]
BECKLEY, WV・4 DAYS AGO
WVNS

Students at one Mercer County school use DUI Simulator

BLUEFIELD, WV (WVNS)– Students at Bluefield High School learned about driving impaired with a DUI Simulator. It was sent by the state’s alcohol beverage control authority. Ernest Gilliard, the driver’s education teacher says this lesson needs to be taught now rather than later. “The earlier you teach it then the more effective it would be. […]
BLUEFIELD, WV・6 DAYS AGO
WVNS

PINEVILLE, WV (WVNS) — According to Norfolk & Southern Railroad, WV Route 16 in Wyoming County will be closed in the near future for railroad crossing maintenance. On Saturday, October 8, 2022, Route 16 will be closed to all travelers from 8 a.m. to 6 p.m. Maintenance and repairs are scheduled to be done on […]
WYOMING COUNTY, WV・4 DAYS AGO

RALEIGH COUNTY, WV (WVNS) — West Virginia’s regional jail system has one of the highest inmate death rates in the nation, with Reuters reporting for every 1,000 inmates, there are 2.23 deaths – the highest among 44 states in the study. The national average is 1.46. More than half of the deaths happen before the […]
WYOMING COUNTY, WV・4 DAYS AGO
WVNS

BLUEFIELD, VA (WVNS)–A new place for physical therapy opened on Thursday, September 22, 2022, in Tazewell County. H2 Health in Bluefield is the ideal place to get your body back to normal. They specialize in physical therapy and speech therapy for all ages. Traci Roberts, the Regional Director of Operations for H2 Health said they […]
TAZEWELL COUNTY, VA・5 DAYS AGO
WVNS

CHARLESTON, WV (WOWK) – A Wyoming County man has been indicted for allegedly failing to pay over employment taxes, according to the United States Department of Justice. According to the DOJ, a federal grand jury indicted Christopher J. Smyth, of Pineville, on charges of four counts of “willful failure to pay over employment taxes” and […]
WYOMING COUNTY, WV・5 DAYS AGO
WVNS

BECKLEY, WV (WVNS) — The streets of Beckley are a bit cleaner due to the efforts of one local organization. Raleigh County Adult Education spent several hours picking up trash along Harper Road as part of the group’s Adopt a Highway initiative. Raleigh and Summers County first partnered with Adopt A-Highway back in 2021 to […]
BECKLEY, WV・3 DAYS AGO
WVNS

SUMMERS COUNTY, WV (WVNS) – Veterans gathered at Bluestone State Park on Saturday, September 24, 2022, to honor a Summers County marine who was killed in action in 1983. It was a beautiful day for a Ruck. That’s what marines call a hike, named for the heavy rucksack they carry on their backs. On the […]
SUMMERS COUNTY, WV・3 DAYS AGO
WVNS

BRAMWELL, WV (WVNS)– Montcalm High School is one of many recipients of a $25,000 check from State Farm. School officials, political officials, and Mercer County Schools administration joined in on the occasion as they accepted the check from the State Farm representatives. Teachers Amanda Reed and Sarah Kronden talked a little bit about what this […]
MONTCALM, WV・7 HOURS AGO
WVNS

LEWISBURG, WV (WVNS) – One local city is getting its own signature beer, but you can only get it for a limited time. The city of Hinton partnered up with the Greenbrier Valley Brewing Company, for a very special collaboration ahead of this year’s Railroad Days. Rail Ale will be a special release from GVBC, […]
HINTON, WV・1 DAY AGO
WVNS

BECKLEY, WV (WVNS) — Seafood lovers will not have to wait long for dinner at Beckley Crossing. The owner of an upcoming restaurant, Fish Frenzy, said he currently serves seafood at Alfredo’s, his Italian restaurant in Rainelle, every Friday. The seafood night draws a crowd from around the region, added owner Said Elazaley. Elazaley said […]
BECKLEY, WV・4 DAYS AGO
WVNS

SHADY SPRING, WV (WVNS) – The Shady Spring library in Raleigh County is the sight of a new environmental project. A ribbon-cutting ceremony was held Saturday, September 24, 2022, for the rededication of a protected wetlands area behind the library. Wetlands are a crucial part of the ecosystem that helps to purify storm runoff water, […]
SHADY SPRING, WV・3 DAYS AGO
WVNS

PRINCETON, WV (WVNS) – Mercer Street in Princeton was shut down on Saturday, September 24, 2022, as the city came together to celebrate Autumnfest. The street was filled with crafts, culture, commerce, and community as the city celebrated the beginning of the fall season. The Mercer County Animal Shelter was one of the groups set […]
PRINCETON, WV・3 DAYS AGO
WVNS

BECKLEY, WV (WVNS) — September is National Senior Center Month. To celebrate, the Raleigh County Commission on Aging held an open house to let seniors learn about the opportunities available to them. The open house featured tours of the facility, along with live music, a guest speaker, and a line dance demonstration. Terri Tilley, director […]
RALEIGH COUNTY, WV・3 DAYS AGO