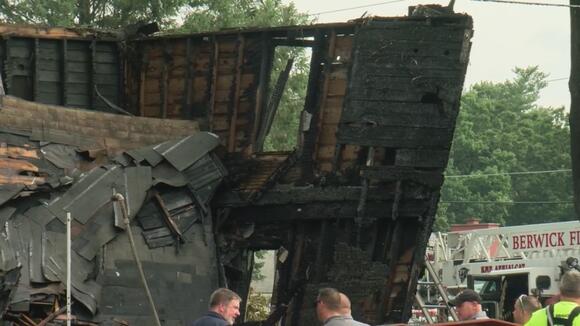 NESCOPECK, LUZERNE COUNTY (WBRE/WYOU) — The Luzerne County Coroner’s Office has sent out a press release stating the cause of death for the five remaining victims of the fatal Nescopeck house fire .

On Friday, around 2:30 a.m. a firey blaze tore through a home on First Street, leaving 10 decedents in its wake. Eyewitness News reported on Saturday that of the 10 deceased, the coroner determined smoke inhalation as the cause of death for three adult females, one adult male, and a 7-year-old girl.

Officials say during the extinguishing of the house fire the remains of 10 individuals were found within the structure of the housefire and were moved to the Luzerne County Coroner’s Office.

According to the press release, Forensic Pathologist Dr. Charles Siebert conducted five autopsies on Sunday on the remaining victims, two male adults, a female adult, and two male children, and determined the cause of death also to be smoke inhalation.

As the press release reads, positive identification of those autopsied is pending review of medical records, dental records, and DNA if required. Although the identities of the deceased are consistent with those reported missing in the house fire.

A GoFundMe page has been set up by the Mayor of Nescopeck’s daughter to help the family.

Donations can also be brought to the Nescopeck Volunteer Fire Company, located at 325 Warren Street, Nescopeck, PA 18635. If you have questions, contact the fire company at (570) 752-5461.

SCRANTON, LACKAWANNA COUNTY (WBRE/WYOU) — Scranton Firefighters are investigating a deadly fire in the city. Crews were called to the scene on North Main Avenue just after 4 pm on Saturday. Scranton Fire Officials confirm one person died in the fire.  Another person was injured but refused treatment.  Several people who lived in the house […]
SCRANTON, PA・7 HOURS AGO
WBRE

SWIFTWATER, MONROE COUNTY (WBRE/WYOU) — Pocono Township Police Department report that the suspect from Friday’s robbery of the Keystone Community Bank in Monroe County is the same suspect from Friday’s robbery of the FNCB Bank in Plains Township.   According to police, the suspect entered the Keystone Community Bank at 11:43 a.m. Friday.   The […]
MONROE COUNTY, PA・11 HOURS AGO
WBRE

Beaver Meadows man defrauded of over $10,000

BEAVER MEADOWS, CARBON COUNTY (WBRE/WYOU) — According to Pennsylvania State Police, a 60-year-old man from Beaver Meadows reported $10,800.00 stolen from his bank account. PSP say the man walked into the station to report a theft by wire fraud on September 15. Police have no active suspects at this time. This is an ongoing investigation.
BEAVER MEADOWS, PA・1 DAY AGO

Editor’s Note: Eyewitness News has updated this story to include the current status of investigations surrounding this incident. PLAINS TOWNSHIP, LUZERNE COUNTY (WBRE/WYOU) — Police say they are searching for a person involved in a robbery at the FNCB Bank in Plains Township. The robbery occurred around 9:15 a.m. Friday at the FNCB Bank on State […]
PLAINS TOWNSHIP, PA・1 DAY AGO
WBRE

Woman sentenced for role in foiled hit on detectives

SCRANTON, LACKAWANNA COUNTY (WBRE/WYOU)— The Lackawanna County District Attorney tells Eyewitness News a man who pled guilty to killing a toddler in Scranton was sentenced to up to 60 years in state prison Friday evening. District Attorney Mark Powell said the judge sentenced Christopher Mele, 35, to a minimum of 30 years and a maximum […]
SCRANTON, PA・1 DAY AGO
WBRE

Woman faces charges for leaving dogs in a hot trailer

NEW MILFORD TOWNSHIP, SUSQUEHANNA COUNTY (WBRE/WYOU) — Police are charging a woman after they say she locked her dogs in a hot trailer with no food or water. According to Pennsylvania State Police, on September 8 around 4:30 p.m. troopers responded to State Route 11 in New Milford Township, Susquehanna County for a report of dogs […]
SUSQUEHANNA COUNTY, PA・2 DAYS AGO

SCRANTON, LACKAWANNA COUNTY (WBRE/WYOU) — District Attorney Mark Powell confirms with Eyewitness News all three teens involved in the fatal stabbing, of an 18-year-old will be charged as adults. According to D.A. Powell, District Justice Sean McGraw ruled there was sufficient evidence to place all charges against Amir Williams, 16, Nahsyeis Williams, 16, and Sheldon Datilus, […]
SCRANTON, PA・1 DAY AGO
WBRE

PINE TOWNSHIP, COLUMBIA COUNTY (WBRE/WYOU) — State police are investigating a report that a father was giving his 7-year-old marijuana to calm him. According to Pennsylvania State Police, it was reported to investigators that between July 1, 2021, and September 1, 2021, a 7-year-old boy was being provided marijuana by his father. PSP says the father […]
COLUMBIA COUNTY, PA・2 DAYS AGO
WBRE

EYEWITNESS NEWS (WBRE/WYOU ) — Sunday marks 40 years since George Banks murdered 13 people in Luzerne County. Banks was convicted of shooting and killing seven children, five of his own, and six adults. At the time, it was one of the largest mass murders in the history of the United States and remains the […]
LUZERNE COUNTY, PA・1 DAY AGO

Robbery suspect taken down by patron in gas station

WILKES-BARRE, LUZERNE COUNTY (WBRE/WYOU)— Officials say a man attempting to rob a gas station in Luzerne County was taken down by a witness on September 21. Police said they were dispatched to the 100 block of Academy Street for a robbery with a male suspect pinned down on the floor by customers around 11:15 p.m. […]
LUZERNE COUNTY, PA・2 DAYS AGO
WBRE

WILLIAMSPORT, LYCOMING COUNTY — According to U.S. Attorney Gerald M. Karam, a Philadelphia man was indicted by a federal grand jury for drug trafficking charges. Karam said that 27-year-old Demitri Carroll was charged with one count of conspiracy to distribute drugs and nine counts of possession with intent to distribute drugs in Clinton and Lycoming […]
LYCOMING COUNTY, PA・1 DAY AGO
WBRE

SCRANTON, LACKAWANNA COUNTY (WBRE/WYOU) — Officials say a man has been indicted Wednesday by a federal grand jury for distributing multiple drugs including heroin in Luzerne County. According to U.S. Attorney Gerard M. Karam, Dario George, 31, of Nanticoke, distributed fentanyl, heroin, and cocaine between November 23, 2021, and May 19, 2022, in Luzerne County. George […]
LUZERNE COUNTY, PA・3 DAYS AGO
WBRE

Police search for bank robbery suspect in the Poconos

SWIFTWATER, MONROE COUNTY (WBRE/WYOU) — Police are actively searching for a suspect involved in a bank robbery in Swiftwater. The robbery happened around 12:00 p.m. Friday at First Keystone Community Bank on Route 611 in Swiftwater. Police tell Eyewitness News the suspect fled the scene on foot in the direction of Pocono Brewery. Officers are currently […]
SWIFTWATER, PA・1 DAY AGO

SOUTH ABINGTON TOWNSHIP, LACKAWANNA COUNTY (WBRE/WYOU) — Police say a man is being charged with DUI after a high-speed chase with officers ends in a crash. According to the South Abington Township Police Department, on Tuesday around 1:00 a.m. in the 100 block of Northern Boulevard, an officer attempted to pull over a car that was […]
SOUTH ABINGTON TOWNSHIP, PA・1 DAY AGO
WBRE

Two accused of possessing meth while driving with children

NEW MILFORD TOWNSHIP, SUSQUEHANNA COUNTY (WBRE/WYOU) — Police arrested two people after they say a traffic stop found them in possession of meth while driving with two children. According to Pennsylvania State Police, on September 9 around 6:40 p.m. troopers pulled over a car for traffic violations. Troopers say the occupants of the car, Carrie Phetmoungkhoune, […]
LUZERNE COUNTY, PA・3 DAYS AGO
WBRE

SPRING BROOK TOWNSHIP, LACKAWANNA COUNTY (WBRE/WYOU) — After being called to investigate two separate incidents at the same home, Pennsylvania State Police arrested and charged a female after they say she was smoking marijuana around multiple uniformed officers. According to PSP, on Wednesday, just before 3:30 p.m. troopers were sent to the 70 block of […]
SPRING BROOK TOWNSHIP, PA・3 DAYS AGO
WBRE

SCRANTON, LACKAWANNA COUNTY (WBRE/WYOU) — According to U.S. Attorney Gerald M. Karam, a man from New York has been sentenced to 20 months imprisonment for allegedly possessing firearms and ammunition as a felon. Karam says that police in Susquehanna County allegedly stopped the vehicle of Walik Skeete, 46, of New York, for vehicle code violations. […]
SCRANTON, PA・3 DAYS AGO