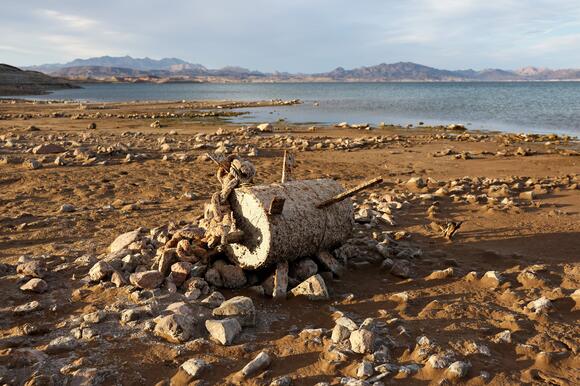 More human remains were discovered on the edge of Lake Mead, marking the fourth such find since May as the lake's shoreline recedes from drought.

Rangers received a call Saturday morning reporting "human skeletal remains" at Swim Beach in Lake Mead's Boulder Basin, according to the National Park Service . Authorities set a perimeter around the remains and retrieved them with assistance from a Las Vegas Metropolitan Police dive team.

The Clark County Medical Examiner’s Office is attempting to determine when and how the person died as investigators review missing persons records.

A BODY IN A BARREL, GHOST TOWNS, A CRASHED B-29: What other secrets are buried in Lake Mead?

Multiple sets of human remains, dozens of sunken boats , trash and baby strollers have been found on the edge of the lake this summer as water levels sit at their lowest since the reservoir was first filled.

On May 1, a barrel containing human remains that police said was probably dumped in the 1970s or 1980s was found near Hemenway Harbor, and more remains were discovered on the shoreline by paddleboarders a week later. Partial human remains were found in the Boulder Beach area July 25 .

Police suggested that more remains and other items may be found as the water level recedes.

Lake Mead, the nation's largest built reservoir surface, has dropped more than 170 feet since the reservoir was full in 1983 because of drought and heavy water usage by nearby states. The lake was created by blocking the Colorado River with the Hoover Dam, and though it has been full several times, its water level has receded for years.

Large swaths of the West are experiencing moderate to exceptional drought, including California, Nevada, Utah, Arizona and New Mexico, according to data from the National Drought Mitigation Center .

Scientists have warned that drought intensification is a result of global warming, mainly from rising levels of carbon dioxide and other greenhouse gases in the atmosphere.

The U.S. House of Representatives passed the Wildfire Response and Drought Resilience Act last month, which would authorize funding for drought relief efforts on the Colorado River.

The killers thought they were Scott free. Now that remains are found they're wondering if they left evidence behind. Start looking over your shoulders 👀

Im sure you could find a lot of bodies out in the desert as well.

Bureau of Reclamation to hold back water in Lake Powell

SALT LAKE CITY (ABC4) — The U.S. Bureau of Reclamation will reduce water releases from the Glen Canyon Dam starting today to help protect water levels at Lake Powell, the country’s second-largest artificial reservoir in the country, until the spring runoff. The monthly adjustments, which run from December 2022 to April 2023, will hold back […]
SALT LAKE CITY, UT・11 MINUTES AGO
USA TODAY

Many nursing homes are poorly staffed. How do they get away with it?

An Arizona-based federal judge has ordered sanctions against the legal team assembled by gubernatorial candidate Kari Lake (R) and another plaintiff in a failed lawsuit against winning opponent Katie Hobbs (D) and other defendants from two Arizona county government boards. The attorneys being sanctioned are not directly named in Thursday’s...
ARIZONA STATE・22 HOURS AGO
USA TODAY

Why are homes allowed to be built in lava zones? Mauna Loa eruption has Hawaii residents wondering

Retired priest Otis Young, 71, formerly of St. Peter Catholic Church in Covington, La., has been identified as a victim in a double homicide Nov. 28.
COVINGTON, LA・1 DAY AGO
USA TODAY

Mobile home roofs peek over the soundwall on Fulton Rd. photo credit: Credit: GoogleMaps Residents of most mobile home parks in Santa Rosa will likely see smaller rent increases than expected after the city council opted to forestall a pending inflation-linked jump set for January.     Set to rise nearly 6 percent, the rent increase at regulated mobile home parks was trimmed to 4 percent.    At the suggestion of council member Natalie Rogers, the formula was also changed for future increases. While still linked to annual changes in the region's consumer price index, future increases would be limited to seventy...
SANTA ROSA, CA・1 MINUTE AGO
USA TODAY

A panel of the Democratic National Committee demoted Iowa and New Hampshire in a vote in which both states were the only ones opposed to the new plan.
IOWA STATE・12 HOURS AGO
USA TODAY

The University of Idaho is holding vigils Wednesday for four students who were stabbed near the campus on Nov. 13. Fear and uncertainty lingers.
MOSCOW, ID・2 DAYS AGO