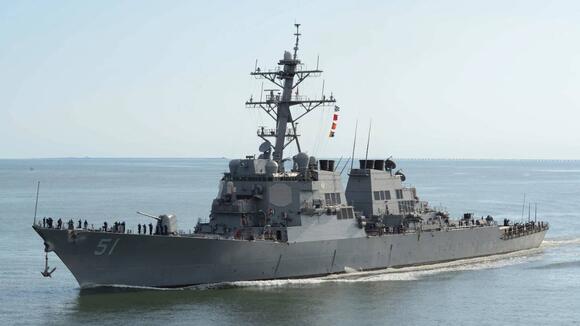 HENDERSON COUNTY, N.C. — The U.S. Navy says that a North Carolina native assigned to a guided missile destroyer was lost overboard and presumed dead in the Baltic Sea.

Seaman Recruit David L. Spearman went overboard Monday from the USS Arleigh Burke, according to a news release. A search effort near Helsinki, Finland, was called off earlier in the week.

The Navy said that he had reported to the ship in April after training in Illinois.

“This bright, young man made an oversized, positive impact on Arleigh Burke. My entire crew’s thoughts and prayers are with Seaman Recruit Spearman’s family and friends. We offer our most sincere condolences for their loss,” said Cmdr. Pete Flynn, the ship’s commanding officer.

WLOS-TV reports that Spearman was a 19-year-old from Etowah in western North Carolina’s Henderson County.

The family told the TV station that several generations of his family had served in the Navy.

The Navy didn’t release further details about what happened.

(WATCH BELOW: Bus carrying Fort Bragg troops crashes on the way to Hornets game in Charlotte)

That is TRULY, SERIOUSLY SAD AND BAD NEWS ALTOGETHER. My thoughts and prayers from FAMILY 2 this SAILOR'S #SAILINHEAVENMYBROTHER

Florida deaths rise to 47 amid struggle to recover from Ian

FORT MYERS, Fla. — (AP) — Rescuers evacuated stunned survivors on a large barrier island cut off by Hurricane Ian and Florida's death toll climbed sharply, as hundreds of thousands of people were still sweltering without power days after the monster storm rampaged from the state's southwestern coast up to the Carolinas.
FLORIDA STATE・14 HOURS AGO
WSOC Charlotte

BARTOW, Fla. — As residents grapple with the aftermath of Hurricane Ian’s destructive winds and flooding, at least one Central Florida man is taking advantage of the river that has suddenly appeared outside his front door. The Peace River has overflowed in Polk County, but Eric Cornell of...
BARTOW, FL・4 HOURS AGO
WSOC Charlotte

Dozens dead from Ian, one of strongest, costliest US storms

PAWLEYS ISLAND, S.C. — (AP) — Rescuers searched for survivors among the ruins of Florida's flooded homes from Hurricane Ian while authorities in South Carolina began assessing damage from its strike there as the remnants of one of the strongest and costliest hurricanes to ever hit the U.S. continued to push north.
FLORIDA STATE・1 DAY AGO
WSOC Charlotte

Ian shows the risks and costs of living on barrier islands

SANIBEL ISLAND, Fla. — (AP) — When Hurricane Ian struck Florida's Gulf Coast, it washed out the bottom level of David Muench's home on the barrier island of Sanibel along with several cars, a Harley-Davidson and a boat. His parents' house was among those destroyed by the storm...
SANIBEL, FL・1 DAY AGO

President Joe Biden will travel to Puerto Rico and Florida this week to view the damage caused by a pair of destructive hurricanes, the White House announced late Saturday. Biden will fly to Puerto Rico on Monday to tour the damage caused by Hurricane Fiona, and then will head to Florida to view the destruction left in the wake of Hurricane Ian, The Washington Post reported. First lady Jill Biden will accompany the president for both visits, the newspaper reported.
FLORIDA STATE・7 HOURS AGO
WSOC Charlotte

GOLDSBORO, N.C. — (AP) — The situation with the poll watcher had gotten so bad that Anne Risku, the election director in North Carolina's Wayne County, had to intervene via speakerphone. “You need to back off!” Risku recalled hollering after the woman wedged herself between a voter and...
WAYNE COUNTY, NC・7 HOURS AGO
WSOC Charlotte

Ian regains hurricane strength as it heads to South Carolina

Floods trap many in Florida as Ian heads to South Carolina

FORT MYERS, Fla. — (AP) — Rescue crews piloted boats and waded through inundated streets Thursday to save thousands of Floridians trapped amid flooded homes and shattered buildings left by Hurricane Ian, which crossed into the Atlantic Ocean and churned toward South Carolina. Hours after weakening to a...
FLORIDA STATE・3 DAYS AGO
WSOC Charlotte

ANSON COUNTY, N.C. — Hurricane Ian encroached into North Carolina, and counties east of Charlotte experienced very heavy rain and high winds. The storm made a second landfall at about 2 p.m. near Charleston. Flooding and power outages in the area remain a threat into the evening. Watch Channel...
CHARLOTTE, NC・1 DAY AGO
WSOC Charlotte

JACKSON, Mich. — (AP) — A scheme to kidnap Michigan's governor in 2020 will get yet another airing in a different court when three men face trial Monday, just weeks before voters consider whether to reelect Gretchen Whitmer to a second term. Fourteen men were arrested two years...
MICHIGAN STATE・4 HOURS AGO

ATLANTA — (AP) — Democrat Stacey Abrams was on stage for an hour with radio and television host Charlamagne tha God and rapper 21 Savage when she faced a question from a skeptical audience member. “A lot of politicians speak about their plan and what they plan to...
GEORGIA STATE・2 DAYS AGO
WSOC Charlotte

A Virginia man decided to play his birth month and year in a Pick 4 promotion -- 200 times for one drawing. And when those numbers came up, he found himself $1 million richer. Al Ghaemi, 57, a retired real estate investor from Alexandria, played the 0-2-6-5 numbers 200 times for the Sept. 6 drawing in the Virginia Lottery, lottery officials said in a news release. When those numbers were drawn, each of his tickets won the game’s top prize of $5,000, giving him a cool million.
VIRGINIA STATE・2 DAYS AGO
WSOC Charlotte

The New York Jets announced on Sunday that two of the franchise's greatest offensive linemen, Jim Sweeney and Marvin Powell, have died. Sweeney was 60 and Powell was 67. No cause of death was announced for either. Powell was talented, beloved. Powell, a right tackle, is one of the most...
NFL・2 HOURS AGO