WATCH: Swimmer Riley Gaines dodges Trump as he tries to kiss her on stage 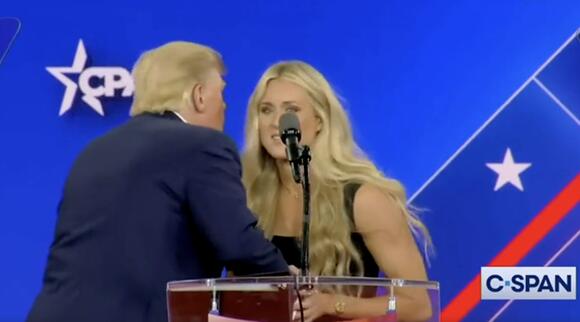 S wing and a kiss!

Former President Donald Trump appeared to be snubbed on stage at the Conservative Political Action Conference in Dallas on Saturday night while welcoming swimmer Riley Gaines to the event.

Gaines, who competed on behalf of the University of Kentucky against Lia Thomas (a biological male who identifies as a transgender woman) and has since spoken out against the athlete, was being introduced by Trump when the former president leaned in to kiss her on the cheek as a greeting.

Video of the incident shows Gaines appearing to pull her head away from Trump's before leaning back in slightly. Trump then appeared to say something to the young athlete, but it does not appear in the video as if they made contact.

Gaines then went on in her speech to say she is fighting to "keep female sports female."

As she finished her remarks, she thanked the former president, and he appeared to try a second time to give her a kiss on the cheek.

Gaines has been critical of Thomas’s participation in women’s collegiate swimming, saying the NCAA failed to protect the integrity of women’s sports.

"Is this really happening?" Gaines recalled saying. “We’re sitting there not even knowing who to talk to, who to complain to, because this kind of all happened behind the scenes and very discreetly."

at least he didn't grab her by the p---y! can't believe this individual was ever president, kind of demeans the position!

The drive by media is disgraceful in the way they put out there propaganda. I watched this and didn’t happen the way it’s being reported. !!

Blogger, did you actually watch President Trump's speech? "Appears to snub"? They were trying to move out of each other's way in front of the microphone, for Pete's sake!

Last week, former President Donald Trump appeared to knock Chris Christie's weight. Now, the former New Jersey governor is ribbing Trump back. Christie, who once had a friendly rapport with Trump, mercilessly mocked him for his recent assertion that a president can declassify material "even by thinking about it" before throwing shade at Trump's management style during a convention Thursday.
POTUS・3 DAYS AGO
WashingtonExaminer

President Joe Biden surprised viewers Friday when pausing his speech to acknowledge a woman in the crowd he said he knew when she was 12. “You gotta say hi to me,” Biden said during a speech at the National Education Association headquarters in Washington, D.C. “We go back a long way. She was 12 — I was 30. But anyway, this woman helped me get an awful lot done.”
WASHINGTON, DC・3 DAYS AGO
WashingtonExaminer

Gwinnett County, Georgia, has validated 15,000 to 20,000 voters after a voter campaign challenged the status of thousands of voters before the November midterm election.
GEORGIA STATE・4 DAYS AGO
Business Insider

Ted Cruz said Republicans don't criticize Donald Trump because he "punches them in the face" for it. Cruz said many Republicans asked themselves how to "deal with Trump" and his incendiary political style. Cruz also praised policy achievements under Trump, who was once a staunch opponent that insulted his wife.
AUSTIN, TX・2 DAYS AGO

Liz Cheney said she'll do "everything I can" to ensure Trump is not a 2024 presidential nominee. Speaking at Texas Tribune Fest, she said if Trump is the GOP candidate, she "won't be a Republican." The recently primaried vice chair of the Jan 6 committee has historically voted conservatively. Speaking...
WYOMING STATE・2 DAYS AGO
Business Insider

Donald Trump once said New York Times reporter Maggie Haberman was like his "psychiatrist." Haberman said that while Trump treats many people like his psychiatrists, "almost no one really knows him." Haberman covered Trump's presidency extensively and interviewed him for her forthcoming book. Former President Donald Trump said reporter Maggie...
POTUS・1 DAY AGO
abovethelaw.com

Before being known primarily as Donald Trump’s errand boy, Chris Christie was a prosecutor. And he’s using that expertise to issue a warning to Donald Trump: shut your trap. During an appearance on ABC the former New Jersey Governor said the “nonsense arguments” (you know, like that he...
POTUS・17 HOURS AGO
WashingtonExaminer

Former President Donald Trump said that at one point when he was in the White House, he threatened one of the top members of the Taliban by sending him a satellite picture of his house and saying he would “obliterate” him. The conversation between Trump and Abdul Ghani...
POTUS・4 DAYS AGO

An Illinois woman with a history of mental illness was charged with attempted first-degree murder after she threw her 3-year-old nephew off a pier and "stared blankly" as he started to sink.
CHICAGO, IL・4 DAYS AGO
WashingtonExaminer

WATCH: Ana Navarro slammed for being 'Republican by convenience' in bitter exchange

Mother dies after 3-year-old finds gun and shoots her

A mother in South Carolina died Wednesday after her 3-year-old found a firearm inside their home and shot her.
SPARTANBURG COUNTY, SC・3 DAYS AGO
WashingtonExaminer

Former President Donald Trump shared a video on his Truth Social account laced with QAnon conspiracy monograms and other symbols. Accompanied by background music, the video shared a litany of memes glorifying Trump and, at times, painting him as a messianic figure while lamenting his 2020 loss at the hands of President Joe Biden. Trump has ratcheted up his trafficking in the controversial conspiracy theory in recent days, drawing sharp criticism from politicos.
POTUS・3 DAYS AGO

Stimulus: Direct inflation relief checks worth $1,050 to be sent out in a few weeks

Eligible Californians are set to receive direct payments of up to $1,050 as part of an inflation relief effort to fight against rising costs for consumers. The direct payments are called the Middle Class Tax Refund by the state and will be sent out to eligible residents beginning in October via direct deposit or state-issued debit cards. The state expects all payments to be issued by January 2023.
CALIFORNIA STATE・3 DAYS AGO
WashingtonExaminer

Republican Study Committee Chairman Jim Banks (R-IN) said he’d like to invite PGA golfers such as Tiger Woods and Jack Nicklaus to meet with the conservative caucus to discuss the league’s differences with LIV Golf after hearing from LIV CEO Greg Norman on Wednesday.
GOLF・4 DAYS AGO
WashingtonExaminer

Russian Foreign Minister Sergey Lavrov delivered a dismissive account of Russia’s war in Ukraine and then abandoned the debate, drawing the jeers of Ukrainian and Western officials.
POLITICS・4 DAYS AGO
WashingtonExaminer

The White House teased possible retaliatory responses against Russia for the referendums that will likely lead to annexations in Russian-occupied Ukrainian territory. “We are prepared to impose additional swift and severe economic costs on Russia along with our allies and partners in response to these actions if they move forward with annexation," White House spokeswoman Karine Jean-Pierre told reporters on Friday, the same day four Russian-occupied territories began their referendums to determine whether they'd join the Russian Federation.
POTUS・3 DAYS AGO

The White House declined on Friday to specify whether President Joe Biden favors any limits to abortion, instead pivoting to opposing various anti-abortion measures backed by Republicans.
PRESIDENTIAL ELECTION・3 DAYS AGO
WashingtonExaminer

Former President Donald Trump is speaking at a "Save America" rally in Wilmington, North Carolina, Friday, in an effort to help Republican candidates ahead of November's midterm elections. The event, taking place at the Aero Center at Wilmington International Airport, features several Republican speakers from the state, including Rep. Ted...
WILMINGTON, NC・3 DAYS AGO
WashingtonExaminer

Diary of a Wimpy Kid star gets life after killing mother

A Canadian court sentenced former child actor Ryan Grantham to life in prison this week after he was convicted of murdering his mother.
PUBLIC SAFETY・3 DAYS AGO