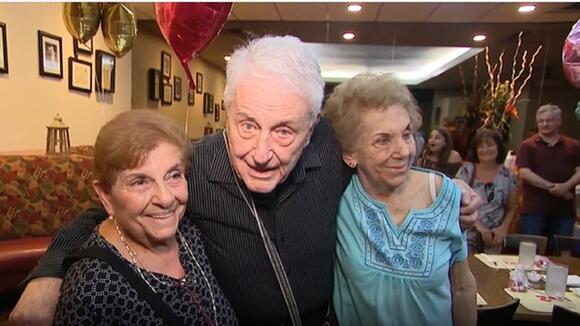 A Hauppauge man was adopted when he was a young child, but Saturday, the 89-year-old united with the family he never knew he had.

Irving Atkins celebrated his 89th birthday by meeting his two biological sisters, their children and grandchildren at a big family reunion in Lake Grove.

Shortly after Atkins was born in 1933, he was put up for adoption by his unwed parents.

“They decided early on that they couldn't afford to raise a child. So I found a wonderful family. I was spoiled rotten,” said Atkins.

Atkins says while his adoptive parents gave him a loving childhood, they kept his adoption a secret. He didn't find out he was adopted until he was an adult. He also did not know he had siblings until recently.

“I think he was about 50 years old when he found out. I think his brother let him know…that's when he started the investigation,” said his son Brian Atkins.

Atkins would spend 36 years chasing his birth story, wondering why he didn't have access to his original birth certificate. The breakthrough came in 2019 with the passage of a landmark New York state law that unsealed birth records for adoptees 18 years and older. He said that “lit a fire under me.”

The new law enabled Atkins to get a hold of his original birth certificate and research the names of his natural parents online. He discovered new branches of his family tree -- two blood sisters -- Rhoda and Marilyn living in Levittown.

“It's unbelievable. When we first heard from Irving we didn't believe it, but he had enough information to show that yeah, it's real and he's our brother,” said Atkins’ sister Marilyn Lauer.

“It's a sad situation but a happy situation. I finally found the rest of my family,” his sister Rhoda Giacinto said.

Atkins has a lot of catching up to do with his newly discovered sisters and their extended families.

“I'm feeling joy and happy and can't wait to learn all the names. It's overwhelming,” Atkins said.

President Joe Biden will be making his way to New Jersey Thursday to visit with Gov. Phil Murphy.
POTUS・18 HOURS AGO
News 12

'All of a sudden, we don't have a venue anymore.' LI couples forced to make wedding changes as Smithtown ends deal with caterer

Some Long Island couples were thrown a major curve ball when they learned the caterer providing the reception was no longer servicing their wedding venue.
SMITHTOWN, NY・2 DAYS AGO
News 12

Police say one teen is dead following a shooting Monday, just a block away from an elementary and middle school in East Orange.
EAST ORANGE, NJ・2 DAYS AGO
News 12

Two suspects are in custody after the father of a Marist College student was shot and killed during a parents' weekend this Sunday.
POUGHKEEPSIE, NY・2 DAYS AGO

The NYPD has arrested and charged a suspect they believe is responsible for fatally slashing an L train passenger.
NEW YORK CITY, NY・15 HOURS AGO
News 12

A 12-year-old boy was fatally struck by a car while crossing a street in West Hempstead on Sunday, police say.
WEST HEMPSTEAD, NY・2 DAYS AGO
News 12

Construction workers were told to stop work at John Faber Elementary School in Dunellen as the result of a state inspection at the site. The stop order came from the New Jersey Department of Workforce and Labor. An inspection found two contractors violated laws. Work was stopped on building four...
DUNELLEN, NJ・1 DAY AGO
News 12

Roy Johnson Jr. and Devin Taylor are facing charges in the death of Paul Kutz - from Long Island.
POUGHKEEPSIE, NY・19 HOURS AGO
News 12

Former Representative Town Meeting member and legislative candidate Raymond Neuberger was charged Tuesday in the death of a cat back in August.
FAIRFIELD, CT・1 DAY AGO
News 12

Police say a man faces assault charges for striking a youth football coach in the head with a football helmet and knocking him unconscious during a game.
NORWALK, CT・2 DAYS AGO

A Suffolk County father was fatally shot at a Poughkeepsie hotel while visiting his son at Marist College.
EAST NORTHPORT, NY・1 DAY AGO
News 12

Police have identified the victim of a fatal shooting at an auto body shop in Deer Park Monday night.
DEER PARK, NY・17 HOURS AGO
News 12

Police are asking for the public’s help in finding a man wanted in a Soundview shooting.
BRONX, NY・19 HOURS AGO
News 12

They say Jaquan Henderson, 23, is facing attempted murder and assault charges, according to the Westchester District Attorney’s Office.
YONKERS, NY・2 DAYS AGO
News 12

A freak accident killed a Mount Vernon woman driving on I-95 on Tuesday. State police say Susan D. Braga, 34, was traveling southbound in Harrison when a tree fell on top of her 2009 Toyota Prius around 7 a.m. The tree bounced off the roof upon impact and the Toyota continued a short distance until it crashed into Ford F250.
MOUNT VERNON, NY・1 DAY AGO
News 12

Letrell Duncan was a standout basketball player who was described as the rock of the youth basketball program that he was a part of at Garden State Bounce.
EAST ORANGE, NJ・1 DAY AGO