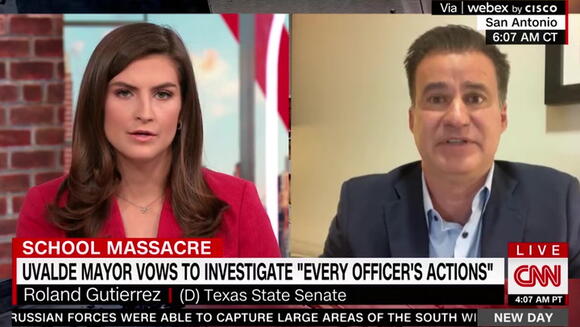 Texas governor Greg Abbott has appointed an Austin policeman to a statewide police standards commission, despite the officer being part of a group of 19 officials indicted for using excessive force during the 2020 George Floyd protests.

On Friday, Mr Abbott praised the appointment of officer Justin Berry, writing in a statement “that the people of Texas are served by highly trained and ethical law enforcement, corrections, and telecommunications personnel.”

The Independent has contacted the governor’s office for comment.

In February, Officer Berry and 18 other Austin-based police were indicted for using aggressive riot control tactics on 10 demonstrators who took part in the 2020 racial justice protests.

Mr Berry in particular was charged with two counts of aggravated assault by a public servant.

The charging documents do not clearly distinguish which officers are accused of what, but the case presents an account of police officers with little training in riot control wreaking havoc on unarmed demonstrators.

One of the demonstrators named in the documents, Christen Warkoczewski , was hit in the face with a police bag round, fracturing her jaw and leaving her disfigured.

The city of Austin has settled seven lawsuits related to police excessive force during the George Floyd protests for a total of $15m, with 12 cases remaining pending.

A group of five of the 19 officers, which does not include Mr Berry, sued the city in June, claiming they had “ limited or no training ” on riot control weapons and tactics.

Mr Berry, who previously ran for the Texas legislature with the governor’s endorsement, has strongly denied any wrongdoing.

In February, he called the charge part of a “continued war on police” and said he’d already been cleared by an internal investigation, a result that would be repeated in court.

“This case is beyond preposterous,” he wrote in a statement on Twitter. “The question is not how this prosecution will turn out. We will be acquitted.”

He said this week he was excited to be appointed to the Texas Commission on Law Enforcement, which sets minimum licensing and trainings standards for police.

“The demands and expectations of today’s professional police officer have never been so great,” he wrote on Twitter. “I look forward to ensuring Texas has the best police officers in the world. Ensuring those who answer the call to serve their respective communities have the training and resources necessary to be set up for success are a priority to not only keeping Texan’s safe but ensuring trust is earned and maintained by those very communities.”

Observers were horrified the governor appointed someone with serious misconduct allegations to the TCOLE.

“This is an indicted officer who is now part of the body licensing and regulating law enforcement agencies,” Sara Mokuria, co-founder of Mothers Against Police Brutality, told the Texas Tribune . “It’s a move in the wrong direction, and it makes us unsafe. And, quite frankly, it’s a message that has been reiterated from the governor’s mansion over and over again, whether that be families in Uvalde who were not safe to send their kids to school, or all Texas residents during the winter storm. Our lives and our safety have consistently been put at risk because of this governor.”

“Nothing says ethical law enforcement standards quite like appointing a police officer charged with Aggravated Assault from his actions during the George Floyd protest...which were about police brutality,” he tweeted.

The POR's (Party of Racists) knows that anything attacking people will make them lots of money. What goes around, will eventually come around.

Lmao little training I riot control how about kids with little raising acting like babies who don't get their way. No reason there should have ever been riots. protest yes but riots no. People today seems to think they should be able to act however they want with no consequences.

Good old mighty mouse on wheels is at it again. What a waste of a wheel chair to haul that peice of ahit around.